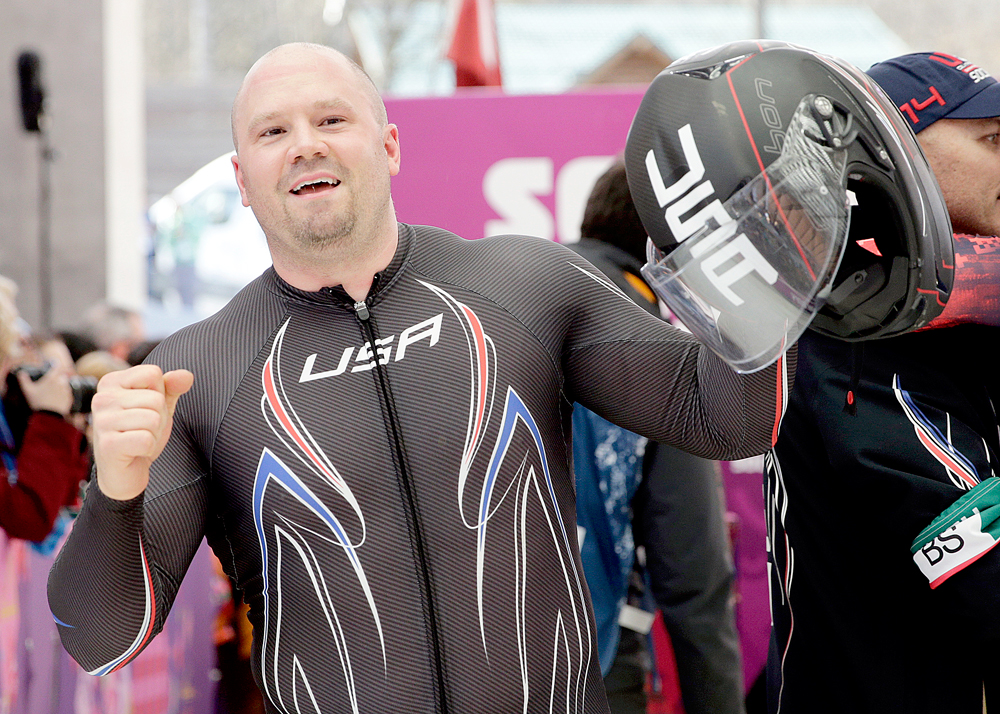 Steven Holcomb acknowledges the crowd after his USA-1 team won the bronze medal during the men’s four-man bobsled final at the 2014 Winter Olympics in Krasnaya Polyana, Russia. The medal has since been upgraded to silver after gold medal-winning Russia was disciplined for doping. Latvia now gets gold, USA silver and Britain bronze. (AP file photo — Jae C. Hong)

U.S. bobsledder Steven Holcomb is getting one last victory celebration.

A long overdue one.

More than 2 1/2 years after his death — and almost six years removed from the bobsled races in question — Holcomb and his team are about to finally be presented the silver medals that they should have received at the 2014 Sochi Olympics. Holcomb and teammates Steven Langton, Chris Fogt and Curt Tomasevicz were originally awarded bronze medals, which were eventually upgraded after a long probe of the Russian doping scandal that now overshadows those games.

The medal reallocation will take place at the Team USA Awards in Los Angeles. Langton, Fogt and Tomasevicz are all expected to attend, as is longtime U.S. bobsled coach Brian Shimer and other top American sliding officials. Holcomb, who was 37 when he died in his sleep at the Olympic Training Center in Lake Placid in May 2017, will be represented by his family.

“I think the word that comes to mind most quickly is bittersweet,” said Jean Schaefer, Holcomb’s mother. “It’s certainly a great honor for Steven and I’m so very, very proud of him — as I have been so very proud of him his whole life. But there’s also a great sadness that he’s not here to enjoy the fruits of his efforts and to celebrate with his team.”

It took years to get to this point: Russia, which won the two- and four-man bobsled races at the 2014 Games on its home ice, was stripped of those titles in November 2017 after the long investigation into the state-sponsored doping program at that Olympics.

But it took the International Olympic Committee until this past March to formally reallocate the medals. Latvia was upgraded to gold in four-man, with Britain moving up to bronze. In two-man, Switzerland eventually was elevated to gold, with Latvia up to bronze.

The U.S., which left Sochi with bronzes from both races, is now recognized as the silver medalist in both. Holcomb and Langton were in the two-man sled; Holcomb drove Langton, Fogt and Tomasevicz in the four-man race.

“Holcomb made such an impact on so many people’s lives,” said Kaillie Humphries, the longtime Canadian bobsledder and two-time Olympic women’s champion who is now competing for the U.S. “He was the best.”

Holcomb, who had prescription sleeping pills and alcohol in his system on the night that he died and was so depressed by failing eyesight in 2007 that he attempted suicide, was by far the best bobsledder in the U.S. program — perhaps ever. He was a winner of at least 60 World Cup medals, more than a dozen World Cup championship trophies and the various awards from his career are scattered about the homes of his relatives.

His mother’s intention for the silver medals is that they be donated to the U.S. Olympic and Paralympic Committee archives. The USOPC was in possession of Holcomb’s bronze medals, as a gift from his family, when they had to be surrendered to the IOC in order to receive the new silvers.

Holcomb would have been a lock for the 2018 U.S. Olympic Team as well, where he could have added to his medal haul — he drove the U.S. to gold in the four-man race at the 2010 Vancouver Games, ending a 62-year drought for the Americans in bobsledding’s signature race.

His mother went to Pyeongchang last year instead, representing her son and his memory. The grieving process is not over, though Tuesday’s event is certain to bring back happy thoughts as well.

“I’m as OK as I can be,” Schaefer said. “I don’t know if a parent ever gets over the loss of a child, because it’s certainly not the natural order of things. And I have to say that the support of his teammates and the Olympic family is incredible. Just incredible. You feel the love all the time.”

She will feel it again Tuesday, one more time.