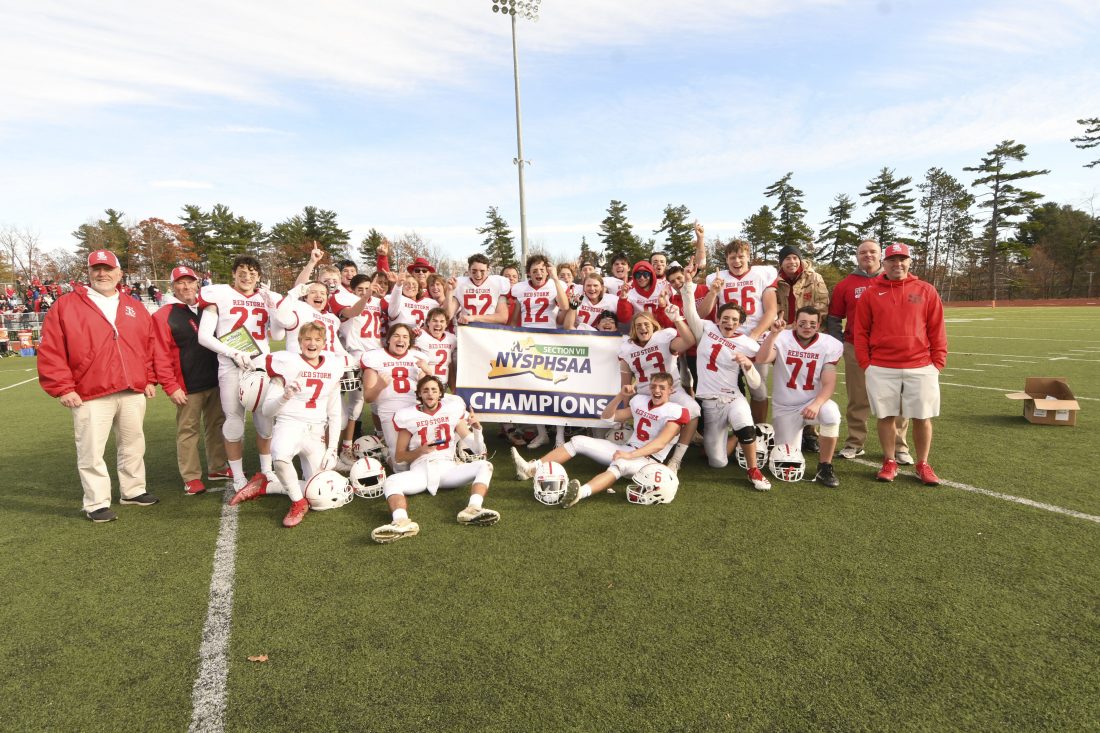 SARANAC LAKE — It’s do-or-die time for the Saranac Lake football team as it heads into state postseason action for the first time in three years.

The Red Storm will take on a powerhouse in unbeaten Gouverneur in a sub-regional playoff game between the Class C champions of sections VII and X champions.

The contest will be played on the Ogdensburg Free Academy’s turf field on Saturday with the opening kickoff slated for 1:30 p.m. The matchup was originally scheduled for Friday evening but predicted bitter cold temperatures and strong winds caused it to be pushed back one day.

Saranac Lake advanced after taking down AuSable Valley 31-26 a week ago as it claimed it seventh sectional crown in the past 10 years. Gouverneur moved on with a 25-6 victory over Ogdensburg in the Section X title tilt.

The game features the run-oriented Wildcats battling it out against a Red Storm squad that has turned up its offensive production in its past two playoff games by finding success both running and throwing the football.

Gouverneur enters the game with an 8-0 record and is currently ranked eighth in the state in Class C by the New York sportswriters association. Saranac Lake is 6-3 and became ranked for the first time in the same poll, moving up from honorable mention to 19th.

Coach Sean Devlin’s Wildcats are paced by the fantastic senior trio of Caleb Farr, Cayden Stowell and Mitchell Tyler, who have combined for 1,662 rushing yards. Farr, Gouverneur’s quarterback, leads the team in rushing with 622 yards. With a nearly unstoppable ground attack that has helped the Wildcats rack up 344 points this season, Farr hasn’t had to air the ball out much during the campaign. He has 481 yards passing and four touchdown throws.

Bennett, his staff and players have watched film from the last two Gouverneur contests, and they’ve witnessed a fast group that has been scoring an average of 43 points per game.

“We saw a physical running team that loves to run jets and fake sweeps with the quarterback ISO. Their defense is pretty solid as well,” Bennett said, adding that his defense has been pretty successful stopping the run this season.

“We have a nice front against the run,” Bennett said. “We have some quicker guys in the middle, two very good defensive ends and our linebackers have been filling. There’s no question we need to stop the run. I’d like nothing better than to see us get up by a score or two and force them to throw and get out of their comfort zone.”

Bennett said a key for his team on offense will be establishing the run and keep the ball away from Gouverneur’s talented backs.

The Red Storm was especially effective a week ago running the option led by junior quarterback Rhett Darrah, a dangerous runner who has also racked up some big numbers throwing the ball in the latter stages of the season. Senior Ben Munn has amassed some solid numbers running the ball for Saranac Lake in his last two starts, breaking the 100-yard plateau in both games while rushing for a combined 269 yards. After not carrying the ball at all in Saranac Lake’s last two regular season games, Munn now has a team-high total of 459 yards on the ground.

With Munn and Darrah doing most of the work carrying the football, the Red Storm has averaged 217 yards rushing the last two weeks in wins over Saranac Central and AuSable Valley.

Darrah has thrown for 1,328 yards this season, which is tops among the eight teams in Section VII. He has thrown for 11 touchdowns. Senior Jeffrey LaVair had a big day receiving a week ago for Saranac Lake, taking all three of his catch against the Patriots to the house, including an 84-yard touchdown in the opening quarter.

“We’re not going to change things up much from what we’ve done recently,” Bennett said. “We’re going to run the ball and we’re going to throw.”

Although Saranac Lake may appear to be a heavy underdog in Saturday’s game, Bennett said you can’t tell that from seeing the attitude his players have shown during the past week.

“We’re not intimidated and we’re not going to back down,” Bennett said. “I think our kids are prepared and ready for playoff football. The nice thing about playoffs is anything can happen. I like how we are slowly evolving into a team that when things are not going well, it’s all about the next play and the next play. I’m really excited that our kids have never been quitting. They’re laying it all out there. When you play with heart, you can accomplish so much.”

Bennett said win our lose, it’s been a memorable year for Red Storm football, which has made major strides from a season ago when Saranac Lake won just one football game. Most of this season’s roster played on that squad and put in the work to turn their fortunes around.

“It’s been great to see these kids grow as a group from last year to this year,” Bennett said. “I’m really exited to see what these kids can do Saturday. They’re pumped. They’re excited to have this opportunity in front of them.”