NCCC climbs to No. 2 in poll 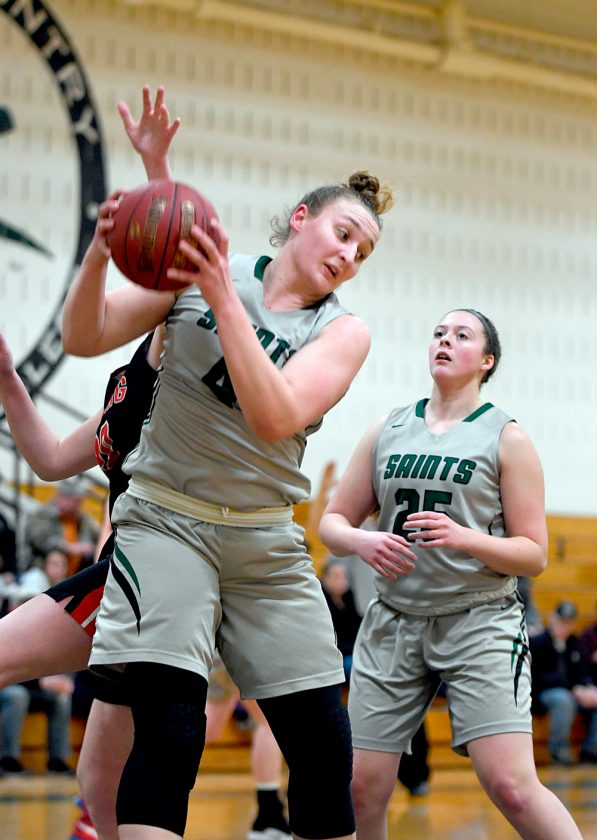 North Country Community College’s Kayla Carder pulls down a rebound as teammate Alexis Poirier, right, looks on during a game last year against Corning. Both are back on the Saints team this season. (Enterprise file photo — Lou Reuter)

SARANAC LAKE — Building on the success of last season’s run at a national championship, the North Country Community College women’s basketball team heads into the weekend as the No. 2 ranked team in the country.

In the NJCAA preseason rankings, the Saints were ranked No. 3 in the country. By virtue of their strong start, they moved up one position when Monday’s rankings came out, trailing only Hostos, the two-time defending national champion from the Bronx.

“It is still early in the season, and as we all know it is how you end the season and not start it,” head coach Jerrad Dumont said. “However, I think that this ranking means a lot to the team as I know they have put in a lot of hard work. These kids started working hard the second they got onto campus, and most importantly they are also working very hard in the classroom.”

Under Dumont’s guidance, the Saints last year posted a 28-3 record that included a 22-game winning streak. The team claimed its first Region III women’s basketball title and earned a trip to the NJCAA Division III Women’s Basketball Championships, where they finished third.

Going into this season, Dumont said his expectations remain high for the team.

“Yes we lost a lot of talent and leadership with the graduating class of last year,” he said. “However, I feel that we also brought in a great group of kids that would work hard each and every day. I assumed Kayla Carder and Talesa Campbell would be captains and leaders for this program going into the year and they did not disappoint. Having these two kids as captains/leaders really helps keep your program at a high level.”

Dumont’s roster this year has 19 players, compared to 13 last year. Having more players has been a challenge, but has also created some healthy competition, he said.

“I think that this competition combined with the hard work of all 19 kids has really helped to make us successful,” Dumont explained.

Going forward, it will take a lot of hard work to keep the team going strong, Dumont said.

“As a coach, I need to keep the girls in tip-top shape while also trying to keep them as engaged as possible each and every night. With this group, it has been an easy task as they do what is asked of them on and off the court. They also understand and see the big picture, and it is very rare that they are not ready to practice hard and compete.”