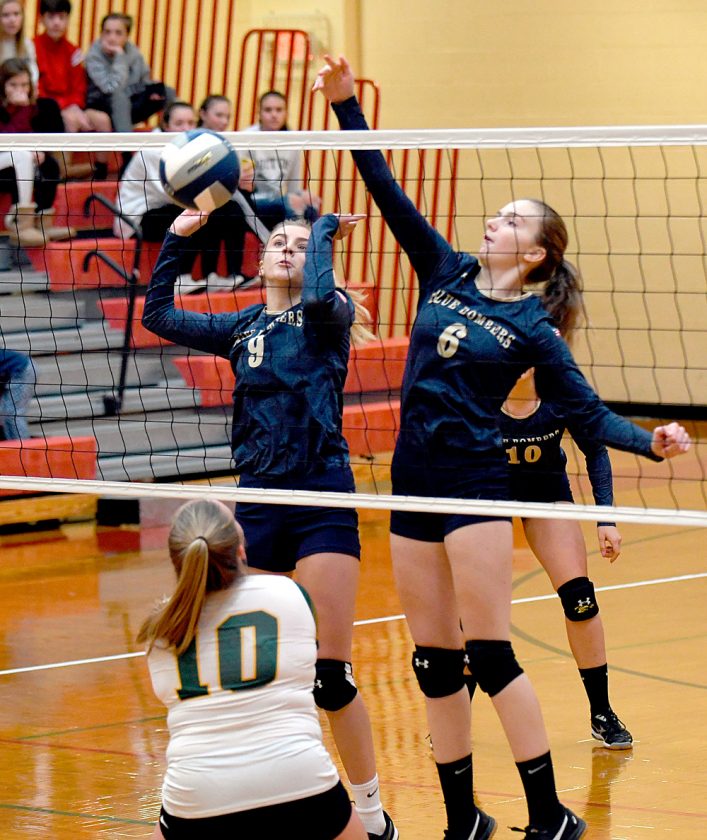 Evelyn Sharp (6) puts the ball away over the net while Lake Placid teammate Deidra Kellerman leaps on the play during Saturday’s Class C final against Northern Adirondack. Pictured for the Bobcats is Anna Brown, one of four seniors on NAC. (Enterprise photo — Lou Reuter)

PICKETTS CORNERS — Two seasons ago, Northern Adirondack ended Lake Placid’s run of five straight Section VII, Class D volleyball titles when in took down the Blue Bombers in the championship match. Lake Placid wrestled the title back from the Bobcats last fall, and on Saturday, NAC was the team coming out on top.

In what has become a competitive rivalry between the only two Class D teams in Section VII, NAC claimed the sweep by 26-24, 25-13 and 25-16 scores in the first of three championship matches played during a volleyball triple header at Saranac Central.

The teams split their two regular season matches, and in the championship final, the Bobcats turned in the better performance on the way to the title.

The Blue Bombers took early leads in all three games but were unable to hold on each time.

Lake Placid coach Sandy Huber said her team especially had a tough time fielding serves from Bobcats’ senior Anna Brown, who finished with a match-high 14 points and nine aces. Elyse Hogan chipped in 13 points in the win, and Cora Barnaby led NAC at the net with eight kills.

“NAC has always been so scrappy on their defense and they make some amazing saves,” Huber said. “Today, they didn’t need to make that many because their passing was really on. Looking at our stats, we only had 10 assists, which means were weren’t able to get good passes to our setters so they could set up our hitters.”

The match opened with a back-and-forth battle that saw the Bobcats eke out their 26-24 victory in the first game, and that win appeared to propel NAC onto a strong finish and the sweep.

“It was intense,” Huber said of the first set. “We had a lot of energy going and I think it would have been great to get that first set heading into the second game. We did play well and we pushed it to 26 so it helped a lot getting it that close, but winning it would have definitely given us more positive energy and confidence.

“Really though, it was so close that I didn’t think losing it would hurt us,” Huber continued. “I thought we’d be OK. We let it get in our heads too much.”

“It’s only the two of us in Class C, so really, no matter what happens all season long, this is the end game for both of us, and we always know it’s going to be a good match playing Lake Placid,” NAC coach Elizabeth Brown said. “We worked hard this week on making sure we were covering and communicating and trying to have less errors than we’ve had all season long. I think our girls came through and did that.

“We’ve been rivals for a long time,” Brown added. “The sectional championship has been going back and forth for years, and it’s nice to bring it back, especially for our four seniors. That first set, Lake Placid hustled, the tried to get to every ball and they kept us on our toes. This match could have gone either way, really.”

Saturday marked the final time Sara McKillip wore a Lake Placid volleyball uniform as the team’s only senior and a co-captain. After missing last season due to illness, McKillip was thrilled to have the opportunity to be out on the courts with her teammates this fall, and expects the remaining players will come back even hungrier to get the crown back next season.

“These girls worked so hard and I couldn’t have asked for a better group of girls to finish out with. I’m so proud of them,” McKillip said. “I can’t wait to see what they do next year, honestly. I think they’re going to be very fired up. They’re going to be excited to play and do even better than this year. I have to give it to the NAC Bobcats. They did everything they needed to do and they picked up those tough balls. They played phenomenal.”

Huber said what made Saturday’s setback tough was the fact that five players on the team won the title as sophomores in 2018. She credited juniors Evelyn Sharp and Deidra Kellerman with strong efforts at the net for Lake Placid. The two combined for seven kills and three blocks in the match.

“I think it was really hard for those five who are juniors now to not come out on top,” Huber said. “I think they’re going to be fighting that much harder next year, emphasizing that we can’t take anything for granted; get more kids out for the optional summer gym days and they’ll be ready to go for mid-August when we’re getting started again.”

Lake Placid finished the season with a 2-15 record.