LAKE PLACID — Nearly nine months has elapsed since the last Viessmann World Cup luge race was held. Fast forward to the new 2019-2020 season, and the tour finds itself reconnecting on the familiar ice of Igls, Austria where the campaign gets underway Saturday, Nov. 23 and Sunday, Nov. 24.

Close observers believe this could be one of its most competitive years in recent memory. The reason for this is the perfect storm: emerging athletes, racers becoming veterans in an experienced-based sport, nations collecting depth, a retirement and a few temporarily stepping away from the track.

The men and women of USA Luge fit most of those categories. The U.S. women’s team has a potent 1-2 punch in the form of Summer Britcher, third in the World Cup the past two seasons, and Emily Sweeney, the 2019 World Championship bronze medalist who lives in Lake Placid. There will be depth from its younger women with Park City competitors Brittney Arndt and rookie Ashley Farquharson.

The American men’s singles team offers seasoned athletes such as 2018 Olympic silver medalist Chris Mazdzer, who grew up in Saranac Lake and now lives in Salt Lake City; Tucker West, a Ridgefield, Connecticut resident who is closing in on 10 World Cup medals including three victories; and recently crowned Norton National Champion Jonny Gustafson, from Massena, whose sliding skills are catching up to his fast start.

Mazdzer, again racing singles and doubles, and partner Jayson Terdiman, are recovering from an assortment of shoulder, neck and elbow issues. Both are anxious to unveil a new doubles sled in World Cup action. The equipment was created precisely for them by team coaches, Norton Saint-Gobain and Dow. 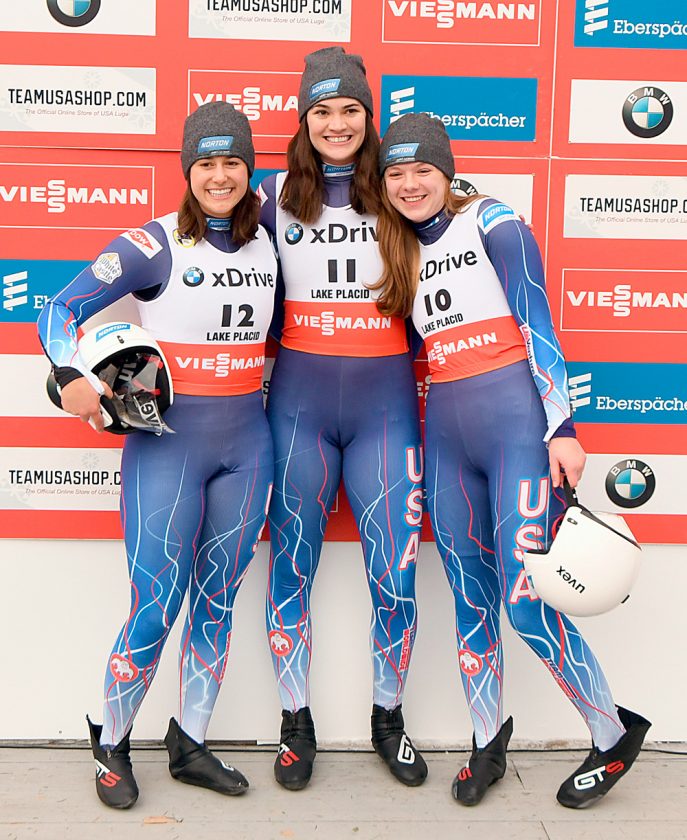 These eight U.S. athletes, with the rest of the luge nations, will find themselves in hotly contested races. It’s something the sport has needed.

When the Germans look over their shoulder, they might very well see a cavalcade rush alongside. Experience will count for a lot this year, and this team has it in the form of Felix Loch, who owns three Olympic gold medals and Johannes Ludwig, who picked up 2018 gold and bronze medals.

Russia will have something to say in the men’s field as well. Recent World Cup overall champions Semen Pavlichenko, who won four of the last five World Cups last year, and Roman Repilov will add to the competitive nature of the discipline.

The Italians will contend with the Fischnaller cousins, Kevin and Dominik, who race for coach Armin Zoeggeler, a six-time Olympian with medals from each of those Games.

The U.S. men intend to participate in the distribution of medals this winter. West is also working with a new sled and has shown excellent speed in the preseason. Mazdzer and Terdiman are the lone USA doubles team, leaving the men’s leg in the six team relays to either West or Gustafson. Both possess fast reaction times from the start handles, an asset that helps determine the medals.

This year’s discussion begins with the German team, but not for the usual reasons. The team that was good for two of three medals every weekend with the occasional sweep thrown in, now is a question mark.

Natalie Geisenberger, a four-time Olympic gold medalist and the sports most decorated athlete, is out this season on maternity leave. Teammate Dajana Eitberger, Olympic silver medalist in Pyeongchang, is also expecting and will not compete, while Tatjana Huefner, who won all three Olympic medals for Germany, retired last season.

The lone holdover from a year ago, Julia Taubitz, proved her mettle, finishing right behind Geisenberger at the 2019 World Championships and in the World Cup rankings. The rest of the German women’s squad is comprised of Jessica Tiebel, a 2018 World Cup bronze medal winner; 2019 Junior World Champion Cheyenne Rosenthal and the third-ranked Junior World Cup athlete last season, Anna Berreiter.

Russian Tatyana Ivanova has the experience and enough medals on her resume to contend along with the American women. Ivanova will get support from the head coach’s kid: Viktoria Demchenko, who finished 2018-2019 with World Cup gold, silver and bronze medals in the final month, comes from the right pedigree as her father Albert won three Olympic medals racing into his 40s. This group will be keen to take on all comers on home ice when the World Championships visit Sochi in February.

Germany has two sleds that have ruled the world for years, and a third doubles team that would be a headliner if their athletes were born elsewhere. Something to chew on: Tobias Wendl and Tobias Arlt, along with Toni Eggert and Sascha Benecken, have accounted for 81 World Cup victories. Wendl and Arlt lead the race, 42-39. Robin Geueke and David Gamm have captured a gaggle of World Cup medals, but in light of their teammates dominance, they came to doubles at the wrong time.

Austria now has two doubles teams ready for the season, led by Thomas Steu and Lorenz Koeller. Russia has an endless supply with five sleds in the pipeline, three that are ready to upset the World Cup and another two down on the farm racing Junior World Cup.

Mazdzer-Terdiman II — they raced together 12 years ago as juniors — are working to get healthy and put a sled on the ice that, unlike last season, is made exactly for them.

The most successful nation since the discipline was created in 2007, Germany was upended last year at both the World and European Championships. Were these harbingers of things to come, or just two blips on the season? The luge world will get its first answers Nov. 23-24 on the two-time Olympic course near Innsbruck.

Women’s singles and doubles will be contested on Saturday, followed by men’s singles and the team relay on Sunday. Catch the live stream on OlympicChannel.com. Broadcast coverage on Olympic Channel is set for Nov. 23 from 5:30 to 7 p.m. and Nov. 24 from 6 to 7 p.m., with NBC Sport Network airing one hour of race action Nov. 23 at 4:30 p.m. In all, luge fans can expect over 33 hours of coverage this season.