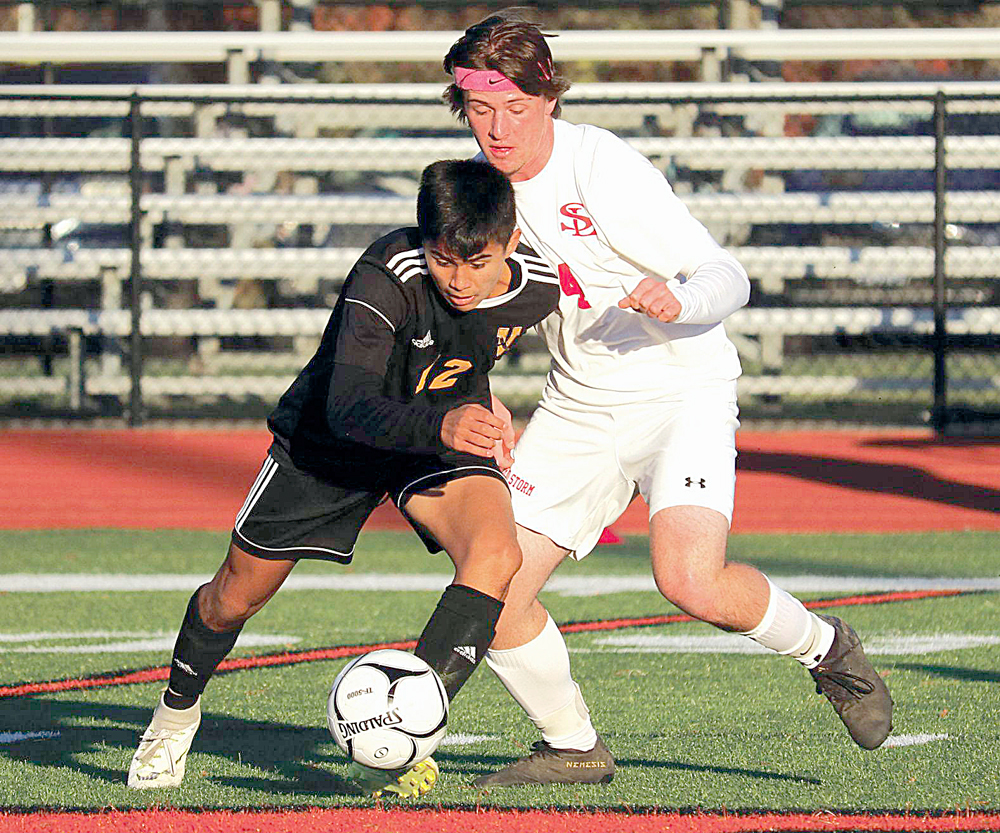 The Red Storm narrowly missed an opportunity to seize the lead early in the second half.

Jack Ensslin did not miss his chance for the Blackbirds.

Ensslin broke open the scoring with 22 minutes left, and additional goals from Aidan Lawson and Derek Moore lifted Voorheesville to a 3-1 win Wednesday at Mohonasen High School in the NYSPHSAA Class C boys soccer sub-regional round.

The Section II-champion Blackbirds (23-1) will take on Section X’s Madrid-Waddington in the regional final Saturday at Potsdam High School. The winner advances to next weekend’s semifinal round in Middletown.

Saranac Lake was coming off its first Section VII championship, a hard-fought 1-0 victory over Lake Placid. The No. 11-ranked Red Storm finish their season 8-8-1.

“It’s a great milestone for our program, to get here,” Saranac Lake coach Josh Marlow said. “It was great to be here. It’s a new era for our school.”

The No. 3-ranked Blackbirds held a decisive possession advantage in the first half, but Saranac Lake goalkeeper Zach Churco and his defense were able to keep Voorheesville off the scoreboard.

Saranac Lake came close to scoring first eight minutes into the second half, but Colton Cheney-Seymour’s high strike was thwarted by a leaping swat from Blackbirds goalkeeper Ryan Beardsley.

“That would have been a game-changer,” Marlow said.

With 22:05 left on the scoreboard, Ensslin found the back left corner of the net to make it 1-0.

Seven minutes later, Lawson scored what proved to be the decisive goal on a feed from Moore, who then tallied his own goal with 10 minutes left.

“Eventually Voorheesville started playing it to the wings more and putting a guy on our stopper (Gabe Faubert),” Marlow said. “They would hit him and play it to the wings, and that’s where they found how to break us. Once they solved that puzzle, things opened up.”

Cheney-Seymour tallied an unassisted goal with 3:17 left for Saranac Lake to break up the shutout.

Churco finished with five saves for the Red Storm, and Beardsley had two for the Blackbirds.

Marlow said he encouraged his players to watch and learn from Voorheesville.

“That’s where you need to be if you want to go into states, so use this as inspiration,” Marlow said. “You have a year to work on it. That’s a great program, awesome, awesome team. It was a pleasure to watch them play.”

Wamsganz said the success of this year’s team should encourage the returning players.

“I think they’ll be more motivated to try to accomplish what we accomplished and get another trophy and another banner,” he said.