PLATTSBURGH — It wasn’t even close.

With an opportunity to claim their second straight state title, Saranac Lake’s boys turned in a dominating performance Saturday to win the Class C crown at the NYSPHSAA Cross Country Championships at SUNY Plattsburgh.

The Red Storm placed three runners in the top 10, and also landed team members in 16th, 31st, 51st and 72nd place on the way to a successful defense of their boys championship. The fastest five times are calculated in the team competition, and when the results were tallied, Saranac Lake ran to a Class C winning score of 28 points. CBA-Syracuse finished a distant second place with 89 points.

“The kids ran really well,” head coach Bill Peer said. “They’re not wowed by the big moment. They know how to show up and they really had a good race plan.”

On a sunny, but chilly day, Peter Fogarty finished third overall to pace the Red Storm, crossing the line in 14 minutes, 50.7 seconds, a result that was just 9.1 seconds off the winning time of the Class C boys individual champion, Caleb Bender of Skaneateles. James Catania finished fifth for Saranac Lake in 14:59, and Andrew Fogarty placed eighth in 15:18.2 as the third Red Storm runner breaking into the top 10. 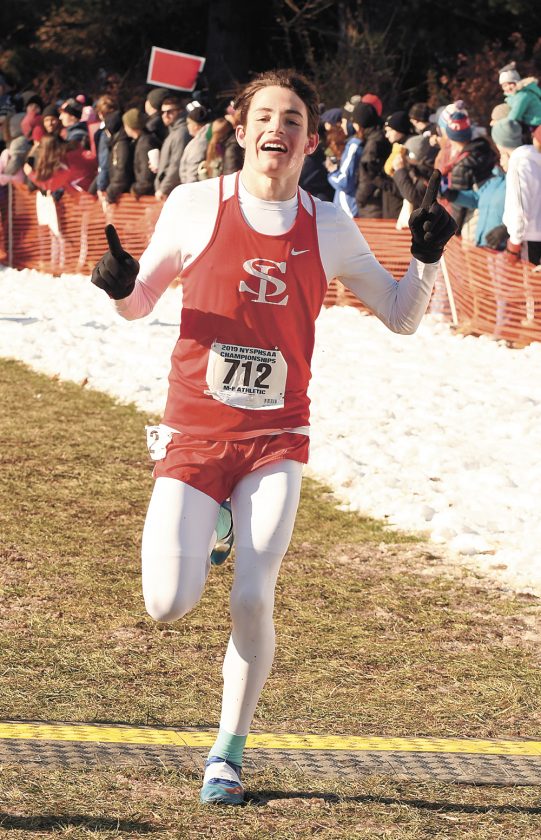 “Our front four, they really got out there and dictated this race,” Peer said. “Fogarty running a 14:50, and Catania running a 14:59, that’s just lights out. Three guys in the top 10, four guys in the top 20. When you do that, you’re really mathematically set. The kids were ready. They really were locked in. Any time you win in November, it’s a good thing.”

This particular Red Storm team began its rise toward the top of New York’s Class C heap two seasons ago when it placed fifth in the state championships. Then last year, Saranac Lake grabbed the top spot for the first time since 1995, and then repeated the feat again Saturday with a team that is still all juniors and younger, which means a three-peat could be in order in 2020.

But instead of talking about a possible three-peat after winning in Plattsburgh, Saranac Lake’s runners were already looking ahead to this coming weekend when they compete in the Federation Championships at Bowdoin Park in Dutchess County. 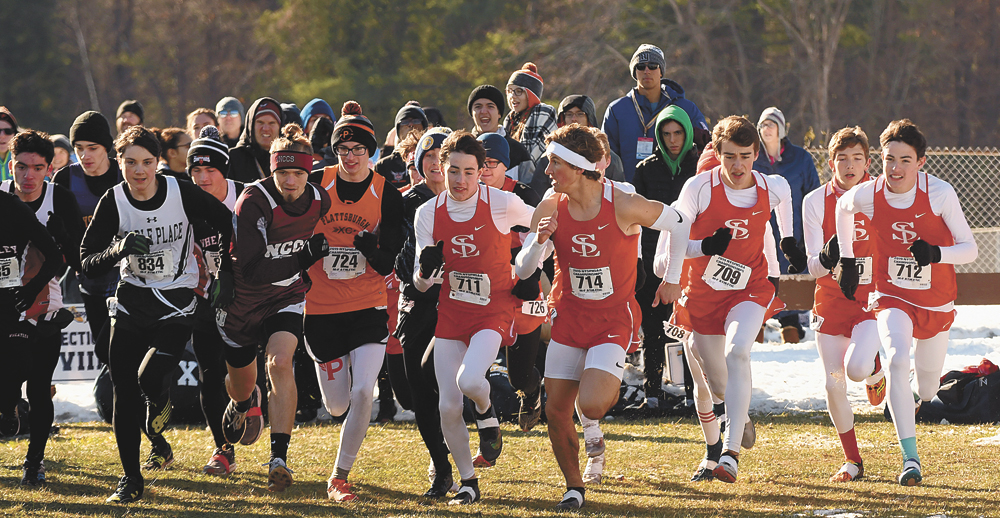 “Two years in a row. It means a whole lot to all of our guys and we just have to be blessed,” Catania said. “We’re so grateful for everything — the parents, the coaches, the community. We couldn’t do this without all of that. The support is great and we are just thankful for every moment, but we have two more weeks to go and we’re looking forward to doing well in the following races.”

After placing 14th in the state meet a season ago, Peter Fogarty was happy to grab third individually this time around, but was more thrilled with the success the team has been experiencing as a group.

“We love trying as hard as we can every day and we love working as a team,” Fogarty said. “I wasn’t even supposed to be up there. I was ranked eighth coming in, so it was really exciting to get third, but really, I’m just happy for our team. We wanted to get the job done, we did, and it was so much fun. Coach Peer liked to keep saying that we were here for a reason and that we can be here and compete with anybody, which was true.”

McCulley’s 16th place result may have been even more impressive due to the fact that he fell during the race on a course that was frozen in some spots and made slippery, soft and muddy in others as the bright sun ever so gradually warmed the day.

“We knew the course was going to be pretty rough conditions and we’re kind of happy that we worked out all the knots in it,” he said. “We just really had to run a strategically smart race and let the weather be what it is. It’s a pretty huge deal being able to run for a great program, and we never take it for granted. I think we’re all pretty happy that all those summer miles we put in paid off.” 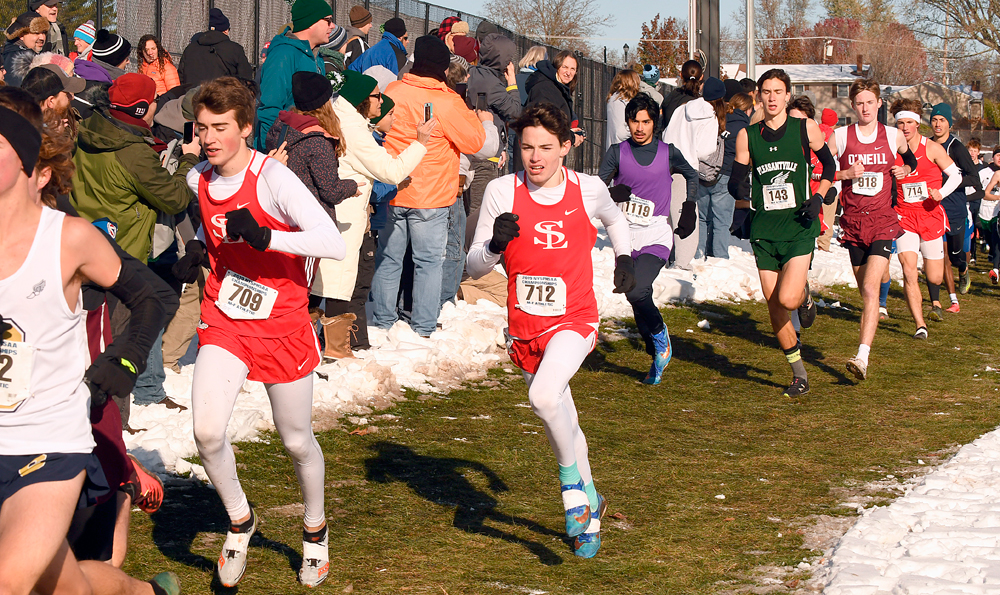 “Our top five, they had a great run today,” Red Storm assistant coach Joe Garso said. “Our coaching staff is really pleased with the work ethic that they put in this year, the focus they’ve had, and their respect. They’re great kids. We’re incredibly fortunate to have them. They’re thoughtful, they’re hard working and we’re really happy for them. There are no individuals. They’re all in for the team.”

When asked if notching a second championship in a row was more difficult than winning it a year ago, Peer answered, “From the tougher-to-do standpoint, any time you win, then there’s the expectation to win again. We’re lucky. We have a cohort of kids who come in July 5 and do all the work all summer long, and that really separates teams. 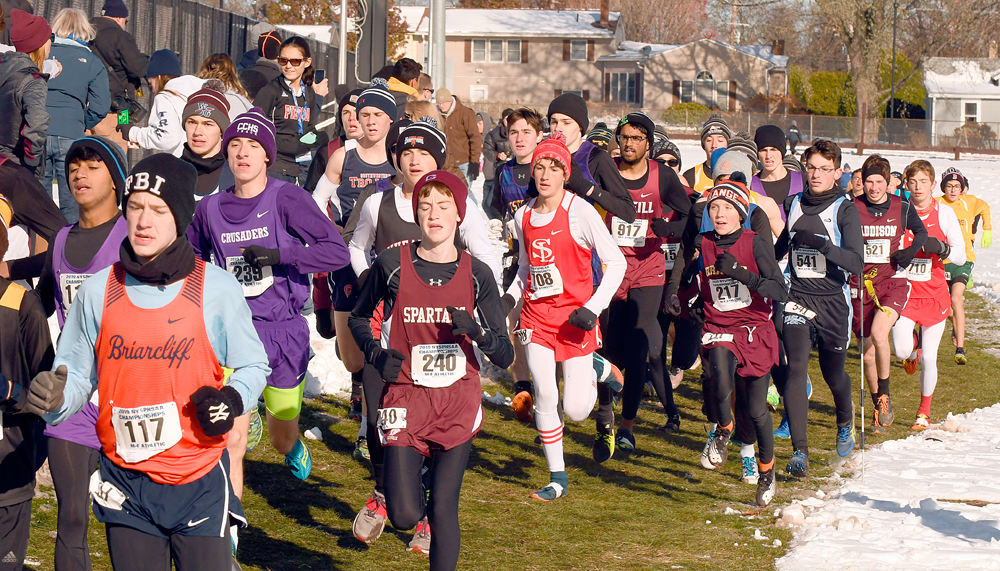