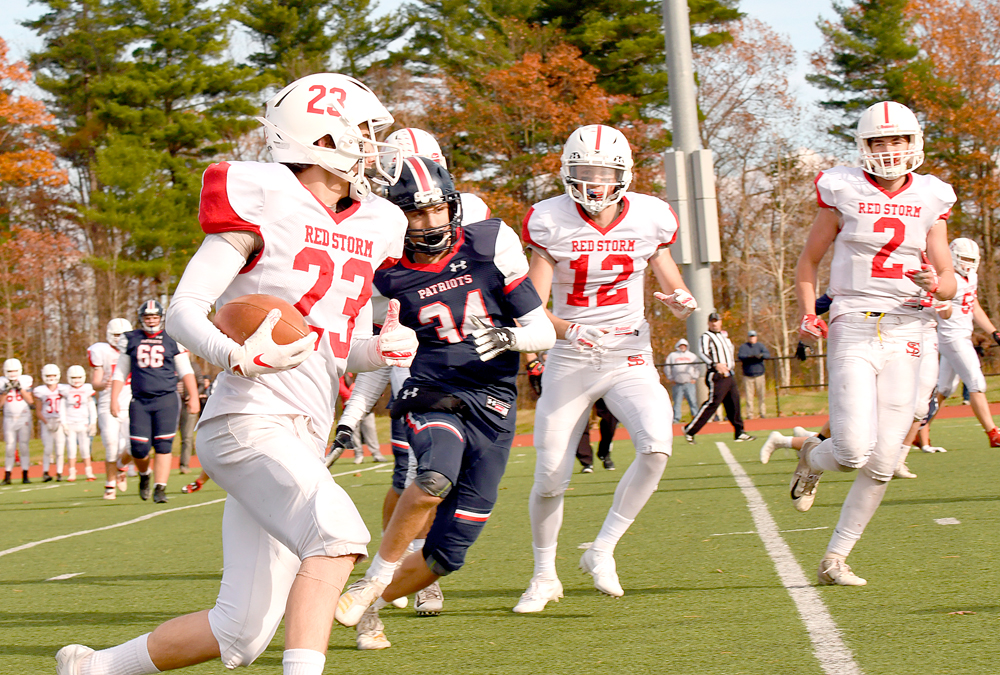 PLATTSBURGH — Saranac Lake’s football team is back on top.

A week ago in the Class C semifinal, Saranac Lake jumped out to a three-touchdown lead on the way to taking down two-time defending champion Saranac by a 21-7 score. That wasn’t the case against the Patriots, as the Red Storm rallied three times and then made a victory-clinching defensive stand in the final minute of the game to seal the deal.

In a matchup peppered with big plays from both teams, Saranac Lake senior receiver Jeffery LaVair hauled in three touchdown passes from quarterback Rhett Darrah, Ben Munn rushed for 132 yards and one touchdown and Darrah also ran for a score.

Senior quarterback Evan Snow had a big day for AuSable Valley in his last high school football game, finishing with four touchdown throws and 310 passing yards in a 12-for-20 performance. The three other Patriots’ threats the Red Storm were concerned about also put points on the board. The pass catching duo of Eli Douglas and Luis Perez combined for 229 yards and three touchdowns on two receptions, and running back Nate Doner added a touchdown on a 69-yard pass-and-run grab. 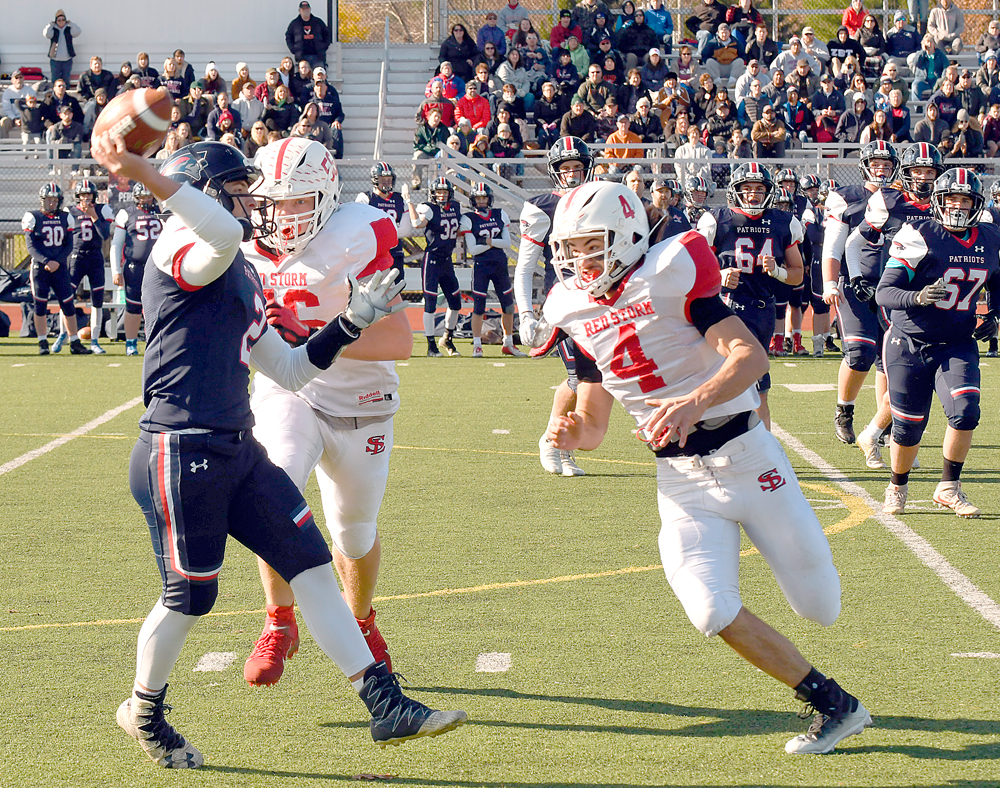 All four of AuSable Valley’s touchdowns came on plays of 45 yards and longer, but Saranac Lake was able to answer with a quarterback option offense that gained 209 yards and moved the chains and limited the Patriots time with the ball.

“I thought coming into the game we were going to be able to run the ball,” Saranac Lake coach Eric Bennett said. “I thought our kids did a good job with that, and we knew we were going to have to limit their big plays. They had a lot of big plays, but we made just enough stops and we’re lucky to come out on the positive side.

“It was beautiful to see that triple option go,” Bennett added. “To see our quarterback keep it past the line of scrimmage and then pitch it, that was cool. It was great to see all that work and all those reps pay off.”

After falling 20-15 to AuSable Valley during the third week of the Champlain Valley Athletic Conference’s regular season, Saranac Lake improved to 6-3 and will next face unbeaten Section X champion Gouverneur Friday in a state regional playoff game. AuSable Valley entered Saturday’s final as the top seed and ended its season with a 4-5 record.

The Patriots got off a fast start, scoring on the first play from scrimmage on a Snow-to-Perez touchdown pass that covered 73 yards. Perez, a senior, was left wide open along the Patriots’ sideline, caught a short throw from Snow and sprinted the distance, and Douglas ran in the conversion for an 8-0 AuSable edge just 20 seconds into the game. 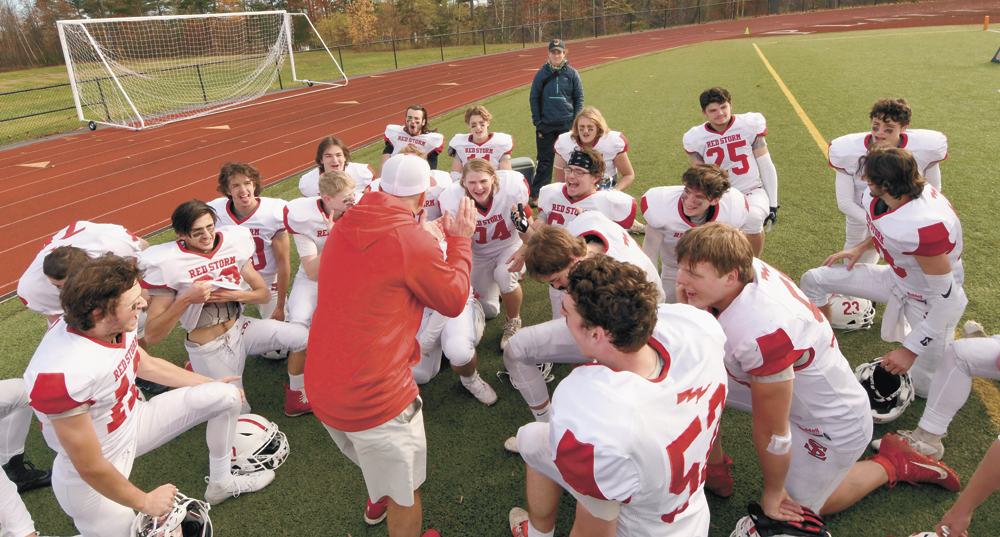 Perez, however, celebrated on his way to the end zone and was penalized, which proved costly on the ensuing kickoff after Saranac Lake’s Braden Ryan returned the ball all the way to the Patriots’ 21-yard line. Four plays later, the Red Storm were in the end zone on Darrah’s one-yard run, and from there, the shootout was on as the teams combined for seven more touchdowns, including six through the air.

After AuSable Valley jumped out to its early 8-6 advantage, the lead changed five times during the course of the contest. Saranac Lake grabbed its first edge at 12-8 on LaVair’s first scoring catch, an 84-yarder with nine seconds left in the opening quarter. The Patriots answered quickly, going back on top 14-12 with just 19 seconds gone in the second quarter when Snow connected with Doner on a short pass in the middle of the field and the sophomore then blew through the Red Storm defense for a 69-yard touchdown play.

LaVair then put Saranac Lake up 18-14, this time on a 28-yard touchdown catch with 7:03 gone in the seconds. But AuSable’s big-play, fast-strike offense responded again in a hurry when Douglas scored on a 52-yard pass play 23 seconds later that allowed the Patriots to carry a 20-18 lead into halftime.

LaVair scored the only points of the third quarter on a 20-yard touchdown reception that lifted Saranac Lake into a 24-20 lead heading into a tense fourth quarter.

The Red Storm took their biggest lead of the game with a nine-play, 65-yard march capped off by Munn’s one-yard touchdown dive 4:02 into the final quarter. Darrah followed with a successful conversion kick to put his team up 31-20.

For the third time in the game, AuSable came right back, scoring just three plays into their next possession on a 45-yard touchdown catch by Douglas. The conversion pass failed, leaving Saranac Lake clinging to a 31-26 edge.

Saranac Lake had a touchdown run by Munn called back on a penalty on its next possession, which ultimately put the ball back in the hands of the AuSable Valley offense at its own 33 with 3:04 left on the game clock. The Patriots were able to move the chains once with the game on the line when Perez came up up with 22-yard catch on a fourth-and-seven play, but the threat vanished as AuSable Valley turned the ball over on downs following three Snow incompletions and a key sack when Red Storm defensive lineman Isaiah Buckley dropped Snow for a four-yard loss.

With the ball back in their hands, the Red Storm went into victory formation, Darrah took a knee to run the clock out, and the celebration started for Saranac Lake.

Bennett said the closing moments of the game were nerve racking, but his defense came through to preserve the lead and the victory for Saranac Lake..

“They had two players on their side that could take it to the house at any second,” Bennett said describing Perez and Douglas. “I was just hoping we had enough grit to prevent that from happening, and our kids played it tough, played it tight and made it happen.”

“It was back and forth all day long,” AuSable Valley head coach Kyle Nolan said. “Both teams played hard. We knew Saranac Lake wasn’t going to be a walk-in victory. It was a tight game the last time we played. They came out ready to play and I think we were ready to play too.

“Fundamentally, we made some mistakes and penalties killed us,” Nolan continued. “Other than that it was a good ball game, a great ball game.”

“We have a bunch of young kids, they never quit, and I hope this is a good learning experience for us to take the next step next year,” Nolan added. “The seniors, I couldn’t ask any more of them. This was a new coaching staff, we came in and they accepted us. They took us in and they believed in everything we were preaching, and we just came up short of our final goal. I’m really happy with their poise with everything they’ve had to go through this year. I’m proud of them. They’re tough kids.”

Although LaVair was playing for a title and caught three touchdown passes in a championship game, the receiver said that in a way, it was similar to any other contest Saranac Lake prepared for this season.

“It was just another day in the office,” LaVair said. “We came out, put the work in and got the job done. Our coaches gave us a great offensive plan, we had a great defensive plan from our coach, and I think we did about everything right. A couple of flags stopped us, but other than that, we had a great day, and we’re hoping to keep going.”

Saranac Lake’s standout senior defensive lineman Patrick Alberga said getting knocked out by AuSable Valley in the semifinals a year ago followed by a loss to the Patriots in the regular season this fall gave the Red Storm all the inspiration they needed to come out on top Saturday.

“We knew what if feels like to lose and we didn’t want to do that again,” Alberga said. “We just wanted to keep pounding it at them on every play and get the banner. We stuck together, we didn’t fall apart, and no matter what, we just kept on pushing, kept on driving. We never doubted that we weren’t going to win. Last time we played them, we underestimated them. We were ready this time, and we played to our ability and smoked them.” 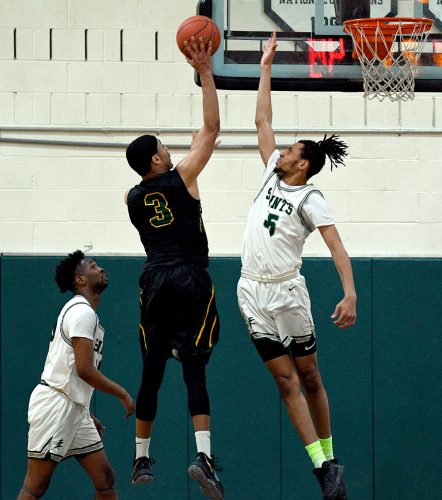 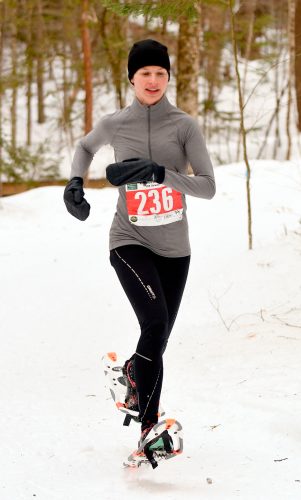