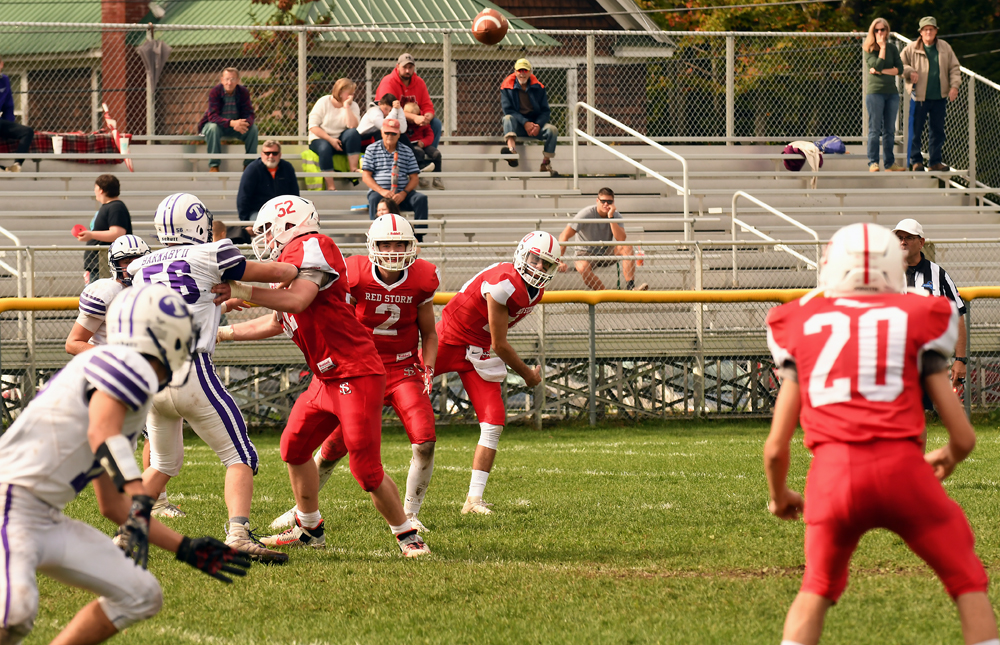 SARANAC LAKE — The Saranac Lake and Tupper Lake football teams have big-time challenges on tap as they both play on the road tonight.

The Red Storm are looking to improve to 4-1 and stay on the top of the Champlain Valley Athletic Conference standings when they visit the not-so-friendly confines of Linney Field to face a tough Moriah team led by the league’s top running back, Maddox Blaise.

Meanwhile, the Lumberjacks are off to an 0-2 start in their eight-man football league, and will travel to Turin to tangle with the high-scoring South Lewis Falcons, who have piled up 114 points while starting their season with a 2-0 record.

For the most part, things have been looking pretty good for the Red Storm four games into their schedule, with the major stumble being a 20-15 loss to AuSable Valley two weeks ago. Saranac Lake is coming off a solid 42-20 victory over Ticonderoga and clash with a Vikings opponent that began the season with a pair of losses and has since won two in a row in convincing fashion.

By far, Saranac Lake’s main concern will be slowing down Blaise, who has gained nearly double the amount of yards as the next closest back in the CVAC. Blaise has carried the football 104 times for 762 yards and has eight touchdowns. The junior is averaging 26 rushing attempts per game and leads the league in scoring with 52 points.

“There’s no doubt we are going to be facing a heck of a running back, a great athlete,” Saranac Lake coach Eric Bennett said. “We know they’re going to give him the ball. I think we have to stop him before he gets started. Once he gets a few steps, he just takes off.”

Bennett expects the game will be a physical battle in the trenches, and a big concern will be Saranac Lake’s stamina. Injuries have taken a toll on the Red Storm, and they’ll be down to 17 in uniform for the matchup with Moriah. They’ll be going without junior linebacker Hunter Lacey, who was hurt last week.

Saranac Lake has played strong defense this season, and a week ago, the offense finally found a new gear against the Sentinels. Ben Munn scored three touchdowns, two on short runs and another on a 44-yard screen pass, to lead the charge. Junior quarterback Rhett Darrah connected on 7-of-8 pass attempts for 177 yards and four touchdown passes, which were the first scoring strikes he’s thrown this year. On the season, he’s completed 25-of-51 attempts for 520 yards.

The opening kickoff at Linney Field is slated for 7:30 p.m.

If Tupper Lake has a rival in eight-man football, head coach Dennis Klossner said it’s Friday’s opponent: South Lewis. The Falcons were there two years ago when the Lumberjacks played their first eight-man football game. The ‘Jacks were actually playing 11-man football in Section X that season, but succumbed to injures.

Instead of giving up the program, Tupper Lake picked up an eight-man game with South Lewis, and history was made. The Lumberjacks went on to compete as an eight-man squad for their first complete season a year ago, and now they’re into their second campaign.

The Lumberjacks fell 66-30 to West Canada Valley a week ago in a game where Klossner said his players just couldn’t match up with the speed of their opponent. However, there were some bright spots in the game for the Lumberjacks.

On offense, Tupper Lake piled up 268 yards rushing, with junior running back Noah Varden leading the way with 126 yards and two touchdowns on 19 carries. Beckett Savage, a sophomore added 86 yards and one touchdown on 10 attempts, and Skyler Pickering chipped in 46 yards on nine carries. Freshman quarterback Jayden Farnsworth completed seven passes for 58 yards and scored two touchdowns on runs of one and nine yards.

Tonight’s game starts at 7 p.m. The game will be Tupper Lake’s second road matchup of the season. The ‘Jacks will also travel for their next contest, which will be Friday, Oct. 11 at Altmar-Parish-Williamstown.