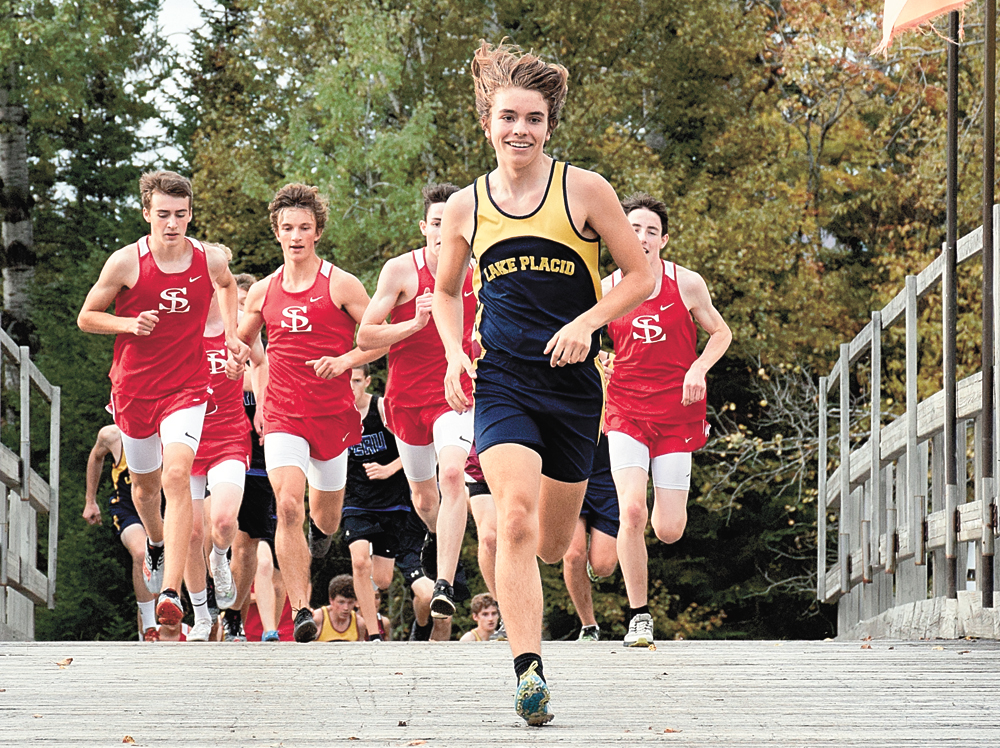 LAKE PLACID — The Lake Placid cross country team hosted its first home meet of the season on a revamped course at Mount Van Hoevenberg on Tuesday, with a field of runners from four schools.

Coming off a weekend of racing in the Rochester area, the Blue Bombers and Saranac Lake faced Northeastern Clinton and Peru. Saranac Lake’s boys dominated their 3.05-mile race, while the top girls were evenly split between Saranac Lake, Peru and Lake Placid.

The Red Storm boys took the top three spots, with James Catania coming across the finish line first with a time of 17 minutes and 8 seconds. He was followed by teammates Peter Fogarty (17:44) and Andrew Fogarty (18:18). Lake Placid’s Mike Skutt (18:23) placed fourth and was followed by Saranac Lake’s Micah McCulley (18:38).

Trabakoulos, who used to run for Tupper Lake but moved to Saranac Lake before school started, said she’s been enjoying running with a larger team. 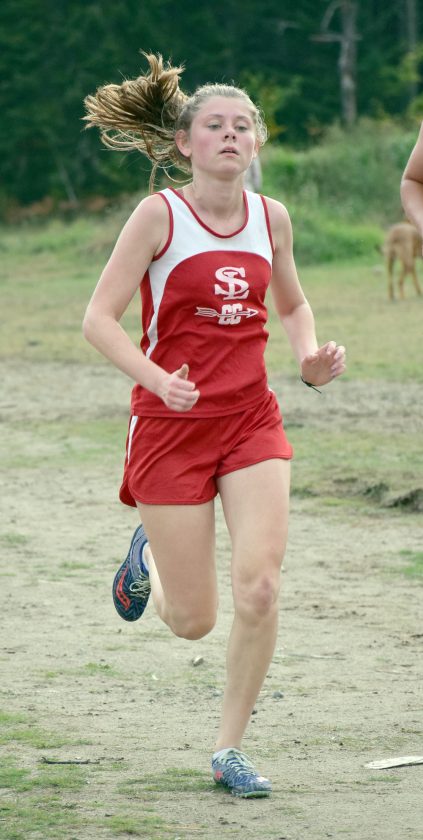 “It got a little rocky toward the second half of it, but I’m feeling good,” Trabakoulos said of Tuesday’s race. “I think it’s going good, I’ve improved quite a bit. I’ve been moving up within the team. I feel a little more pushed with girls running more my pace.”

“I’m really tired from racing twice this weekend, but it’s all right,” he said. “This is a really fun course. That last hill, it hurts. The trails are so nice, so pretty.

“I’m having a lot of fun. I’ve been a little tired from all the races, but I’m excited and ready to rock and roll.”

Saranac Lake coach Bill Peer, who led his team to a Class C state championship last fall, said his boys are up to snuff while the girls are somewhat sneakily undefeated. Both Red Storm squads improved to 10-0 on the season with the wins Tuesday. 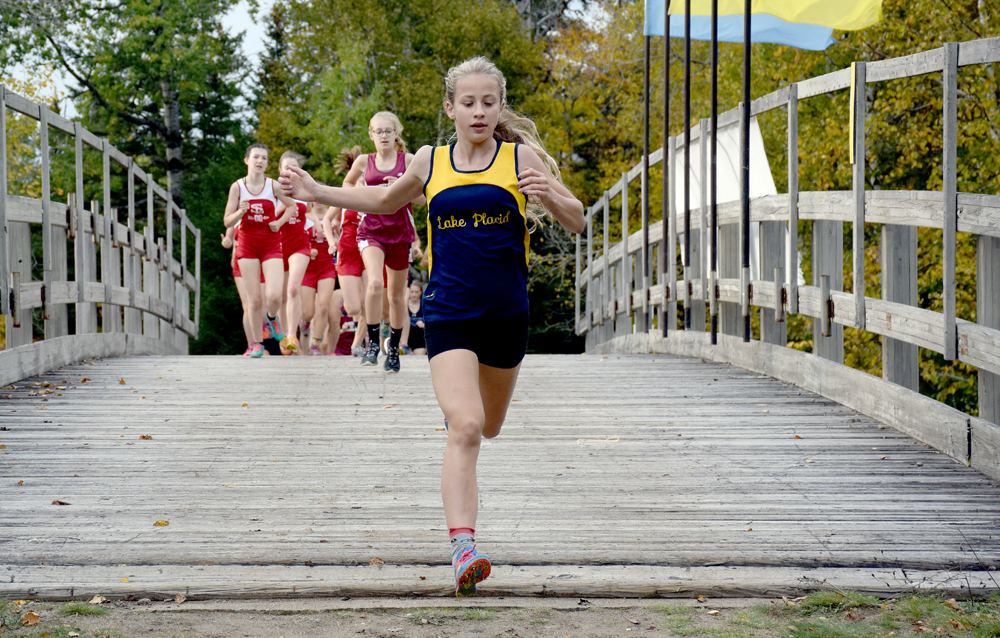 Lake Placid’s Harley Cohen races ahead of the field at the start of Tuesday’s cross country meet at Mount Van Hoevenberg. (Enterprise photo — Justin A. Levine)

“We’re glad to have a good run today. This is the fifth race in 15 days,” Peer said. “So it’s our heaviest race schedule we’re going to see all season. The guys are glad they don’t have anything this Saturday. I’m pretty happy about our depth. If somebody isn’t healthy, we’ve got somebody behind them. The older guys have been good role models.

“The girls team is coming along and they haven’t been beat yet. We just finished the first half of the season, and they’re having a good time.”

Mel Frazer, who coaches the Blue Bombers, said her team was tired after racing this past Saturday and Sunday, but they’re where she expected to be at this point in the season.

“Today I was expecting them to be a little bit hurting, which is fine,” she said. “Next week will be a little easier for us. Next Tuesday will be the start of the second round of meets again.

“Our endurance is there, but putting the endurance and speed together – we’ve got to do some longer intervals. But the racing now will not be so compressed so they’ll have more recovery time, more time for some easier runs. My goal is always to peak at the end.” 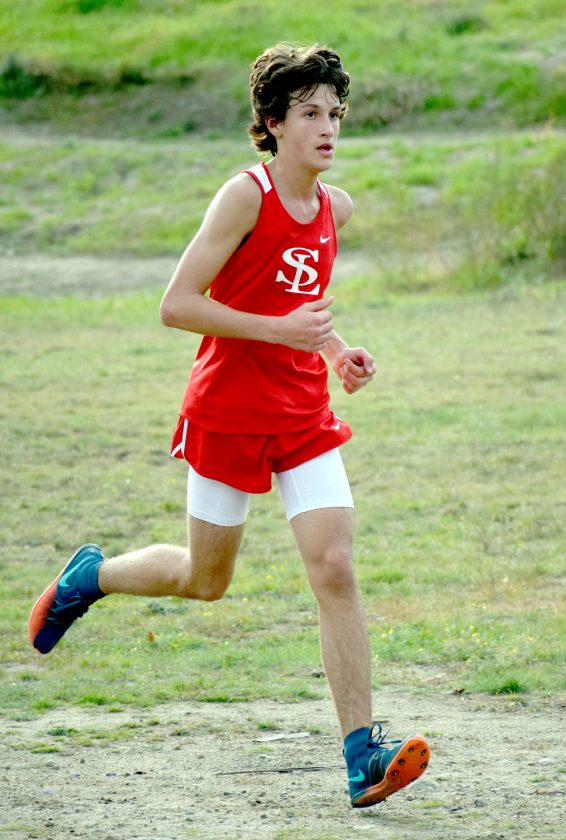 Both the Red Storm and Blue Bombers travel to Plattsburgh next Tuesday for a meet with Plattsburgh and Beekmantown.

(Correction: An earlier version of this article incorrectly said Gwen Mader is a senior.)