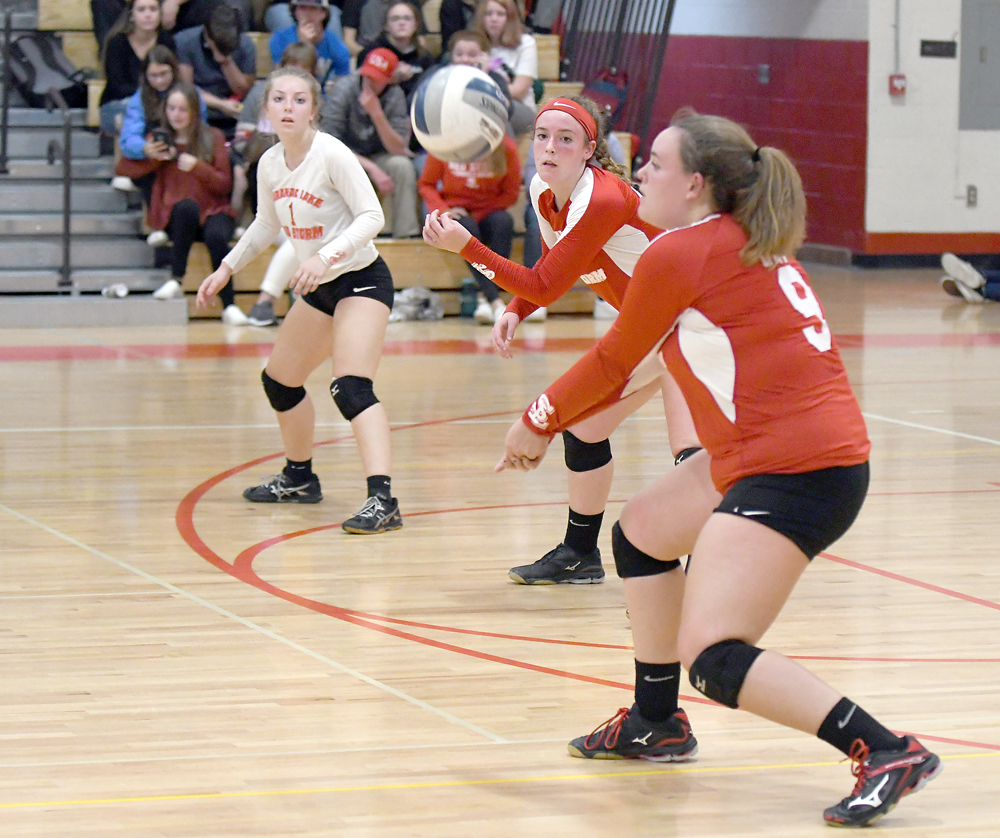 SARANAC LAKE — A season ago, Saranac Lake came as close as it ever had to taking down a mighty Beekmantown program in the sport of volleyball under the leadership of Red Storm coach Mike Navarra. For the first time, the Red Storm in Navarra’s tenure, and for at least another 10 years before that, Saranac Lake pushed the Eagles to five games before falling by a 3-2 score.

Saranac Lake battled it out with Beekmantown in another five-setter Thursday, and this time, the Red Storm made history again, this time, they came out on the winning side in an emotional match.

After stumbling out and watching Beekmantown take the first game 25-14, Saranac Lake battled its way to 28-26 and 25-22 victories in the next two games. The Red Storm faltered again in the fourth, falling 25-10, but came through big time with a 25-19 triumph in the fifth that sent the Red Storm players falling to the floor in jubilation.

“This was monumental,” Navarra said. “This is something our girls will remember for the rest of their lives; being the first Saranac Lake to beat Beekmantown in years and years, and maybe for the first time ever. In all my years of coaching, Beekmantown has one of the best programs I’ve ever seen in terms of its players, its coaches, the respect they have and their sportsmanship. To beat them, that was just something.”

The night didn’t start off well for Saranac Lake playing at home. The Red Storm had a tough time serving early and their play was inconsistent, but eventually they started coming through at key times. In the end, everyone on the floor for Saranac Lake turned in the type effort they needed to prevail. 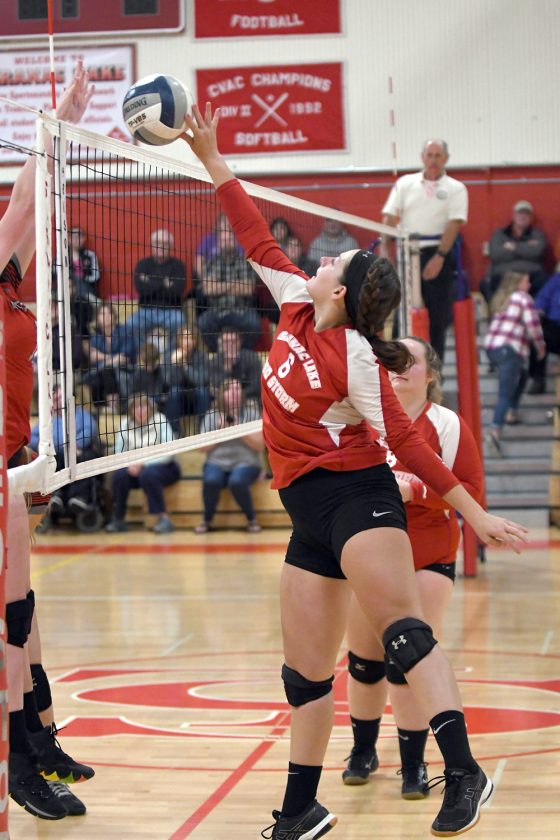 Libero Sydney Andronica was her usual defensive machine, registering a whopping 48 digs to keep the ball in play throughout the match. She also added 13 points, an ace and a kill.

Nora Glover had a huge night at the net with eight kills and six blocks, and was a team leader on top of that performance.

“Nora was very impressive not only with her blocks but with her offense, and she kept our spirits high,” Navarra said. “A great night for her.”

Despite not feeling well while having a rocky practice the day before, Madie Gay had another strong outing. She finished with 20 points, three aces and six kills. Navarra also said Meagan O’Brien had her best night setting that he’s seen from the senior in her three years on varsity. She finished with 18 assists, seven points, two aces and four digs.

Navarra was especially pleased with how Leeret, a junior, came through after really having a tough time serving earlier in the match. Leeret served up Saranac Lake’s final five points to clinch the victory.

“It was great to see her show that kind of composure,” Navarra said. “The game was filled with emotions. It went back and forth. We had to gather ourselves several times throughout the match. In the end, they just kind of put it all together.”

Saranac Lake, the two-time defending Section VII, Class C champions, improved to 5-3 with the win while wrapping up the first half of the regular season. Saranac Lake next plays on the road Thursday, Oct. 10 at Saranac Central.