SL and LP both win 1-0 in Class C boys soccer semis, will meet up first time ever for a championship 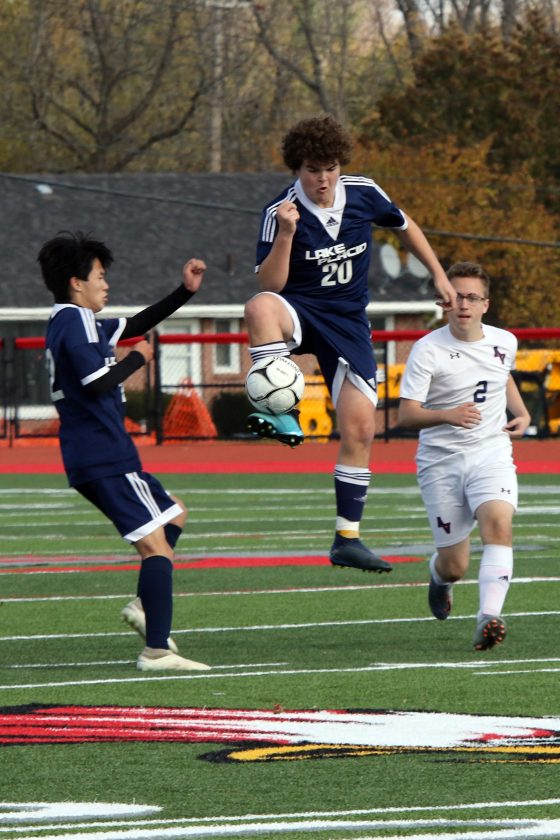 Connor Reid of Lake Placid leaps to control the ball while flanked by teammate Sam Le and and Northern Adirondack’s Troy LaBarge during Saturday’s game in Beekmantown. (Photo — Alicia Brandes)

The Saranac Lake and Lake Placid boys soccer teams will square off in a historic match when they tangle Wednesday in the Section VII, Class C championship game.

Up until two seasons ago, the schools that are separated by 10 miles have competed in different classes in soccer. That changed in 2017 when the Red Storm dropped to Class C, and they’ll face each other for the first time ever in a title tilt under the lights on the new turf field at Beekmantown High School starting at 7 p.m.

The Blue Bombers and Red Storm both advanced to the game with 1-0 victories in semifinal doubleheader on Saturday on the same field. Top-seeded Lake Placid edged fifth-seed AuSable Valley, and second-seed Saranac Lake got past Northern Adirondack, the third seed.

Lake Placid played in the first match, and struggled in a big way on offense against the Patriots, whose only victory this fall came in a 2-1 upset win over Seton Catholic in a quarterfinal contest. Cooper Grady netted the Blue Bombers’ goal, scoring during the middle stages of the second half on an assist from Sebastian Narvaez. Connor Reid started the play on a set piece when he sent a long direct kick into the penalty box from the left side of the net. Narvaez gained control of the ball in traffic, got it over to Grady, who one-timed a shot into the net from six yards out.

“It was nothing more than a tip-tap and it was in the back of the net,” said Lake Placid coach Stuart Hemsley, who added that the match was most likely the Blue Bombers poorest performance of the year.”

“We must have rolled the ball into their goalie’s hands maybe a dozen times,” Hemsley said. “It was all-one way traffic in our favor, but we couldn’t score. After we got the lead, we missed a penalty shot that would have made things a little more comfortable.”

Senior Nick Kelting buried Saranac Lake’s only goal in its victory over NAC. With the win, the Red Storm return to the Class C championship game for the second straight year. They’re seeking their first boys soccer title in school history and hoping for a better result than a season ago when they were dealt a heartbreaking 2-1 loss to Seton Catholic in double overtime.

Hemsley expects the match to be as tight as can be.

“I think this is going to be as close as a sectional final as we’ve ever played in,” he said. “Saranac Lake has their seniors, and we have some of our kids who were in the final four two years ago. They have their good goalkeeper (Zach Churco) and Colter (Cheney-Seymour) and Nick, and we have kids who can score and a strong back four.

“I have no clue what is going to happen,” Hemsley continued. “Saranac Lake has played the big schools and not managed to score lots of goals, and against the smaller schools that we’ve play, we’ve been able to put the ball in the net. This match, it’s up in the air.”