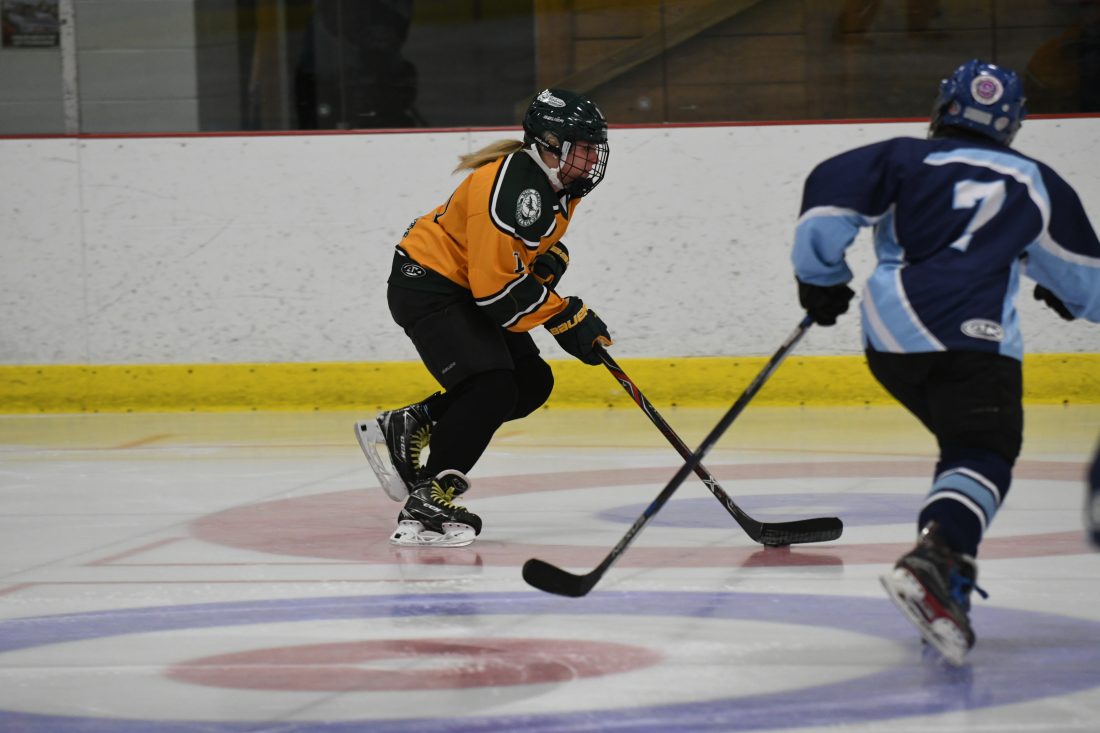 Bobcats’ forward Charlotte Kline skates the puck into the Mount Holyoke defensive zone during the first-period action on Saturday at the Olympic Center. The matchup was the inauguarl game for the Paul Smith’s College women’s hockey program. (Enteprise photo — Lou Reuter)

SARANAC LAKE — The Paul Smith’s College women’s ice hockey team played its first game ever on Saturday, and the Bobcats came out on top by a whole lot more than they were expecting to.

Facing an outmatched new program from Mount Holyoke, Paul Smith’s was unstoppable on the way to winning 17-0.

Casey Gerrish, who coaches both the women’s team and the Bobcats men, who are in their second season on the ice, said Saturday’s result was a combination of his squad being pretty good and a Mount Holyoke program not being at the competitive level where it’s looking to be in the future.

The Bobcats women are a new team playing in the Independent Women’s Club Hockey League, an organization comprised college squads from across New England, as well as Paul Smith’s. Teams compete in the upper Presidential Division and the second level Adirondack Division, where the ‘Cats are playing this season.

Gerrish said he was hoping Paul Smith’s could have headed right into the Presidential Division, but it didn’t turn out to be the case for the first-year Bobcats.

Four players netted hat tricks or better for Paul Smith’s against Mount Holyoke. The Bobcats got off to a fast start on their home ice at the Saranac Lake Civic Center when Samantha Marson scored the Bobcats women’s program’s first goal ever just 11 seconds into the opening period. By the time one minute and 30 seconds had elapsed in the game, the ‘Cats were already on top by a 3-0 score.

“I knew we had a good squad. I knew the kind of players we brought in, but I didn’t expect the score to be that lopsided,” Gerrish said. “I thought the competition would be a little better. I know Mount Holyoke is trying to build. You never want to win 17-0. You want to be in a better battle, and once we start playing some of those other teams, the compete level will be higher.”

The Bobcats women’s team is a combination of student-athletes from both Paul Smith’s College and North Country Community College, with the roster being about a 50-50 mix of players hailing from each school. On Saturday, the ‘Cats were missing some of their top players, who are still competing on their respective schools’ women’s soccer teams.

Gerrish said the women’s inaugural season will include a 12-game league schedule and three more non-league games. The Bobcats’ women next play a home-and-home series this weekend with Union College. Paul Smith’s will travel to face Union on Saturday and then host the same opponent Sunday afternoon at the Olympic Center’s 1980 Herb Brooks Arena in Lake Placid starting at 1:45 p.m.

The Paul Smith’s College men’s team split a pair of home hockey games over the weekend at the Saranac Lake Civic Center, topping SUNY Canton 7-6 Friday and then falling by a 7-2 score to Albany Pharmacy on Saturday.

Gerrish said he’s already seen a big advancement over last season for the Bobcats’ men, who compete as a Tier II team in the Upstate New York Club Hockey League. Paul Smith’s currently owns a 2-2 record after the weekend split.

Friday marked the first time Paul Smith’s has beaten Canton, and junior forward Cody Liguori led the charge, netting his second hat trick in the past two games. Liguori has already scored eight goals in the four contests the team has played. He’s joined on the Bobcats’ top forward line by Gabe Smith and Kyle Bond. The trio are among Paul Smith’s returners and also were also linemates a year ago.

“They make up a really strong line. They’ve been together since day one,” Gerrish said. “They’ve scored 70 percent of our goals.”

Gerrish said Tom Cook and Nate Fuller are top defenders for the team, sophomore transfer Gibson Gilmore has turned in some strong minutes, and defenseman Chip Demore has been providing leadership on and off the ice.

Paul Smith’s men play one game this weekend, hosting Union at the Olympic Center in the second matchup of Sunday’s doubleheader. The PSC-Union men’s tilt will follow the women’s game and is slated to start at 4 p.m.