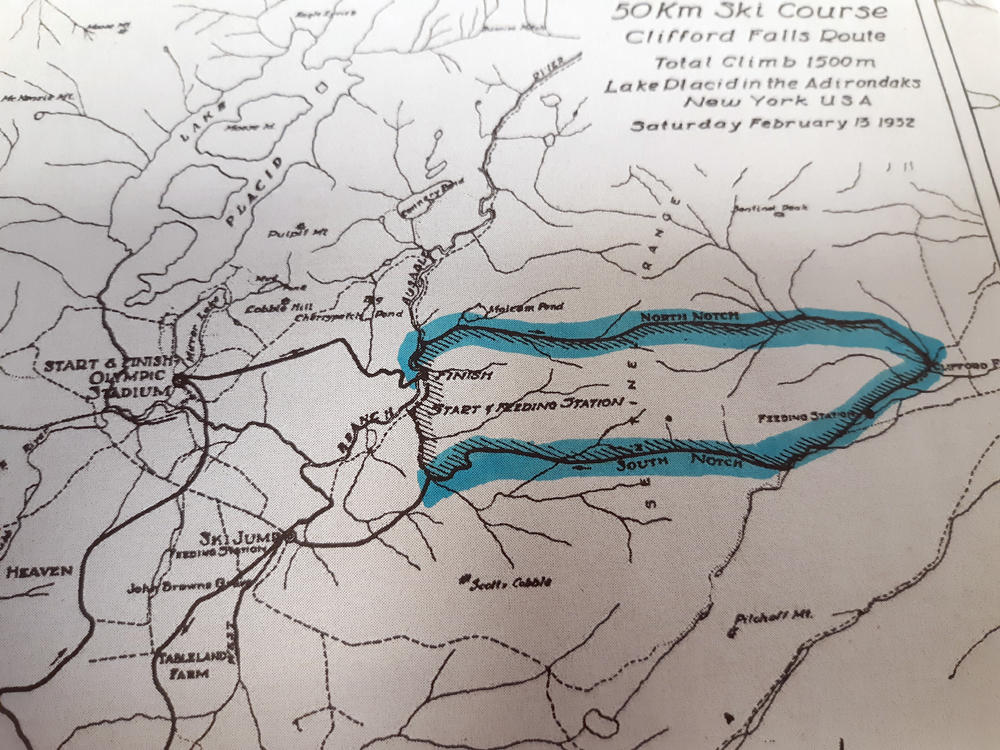 This map, from the official report on the 1932 Olympics, shows the location of two long-gone trails that were recently discussed in the unit management plan for the Sentinel Range Wilderness Area. (Enterprise photo — Justin A. Levine)

LAKE PLACID — Lake Placid is famed for its two Winter Olympics, and while the Miracle on Ice is what most people think of, the 1932 games left some marks on the community as well.

One of those was recently unearthed in a unit manangement plan put out by the state Department of Environmental Conservation for the Sentinel Range Wilderness Area just outside the village. In that UMP, the DEC says it will decline to reopen two trails in the heart of the wilderness, called the North Notch and South Notch trails.

People quickly began to speculate where these trails could be, as the SRWA is largely trailless, except for the Jackrabbit Ski Trail and some short hikes. However, in the official report of the 1932 Winter Olympics, there is a map of the two trails showing they were used in what may be one of the closest races in Olympic history.

“Early in the 20th Century, Lake Placid became one of the first winter sports centers in America due in large part to Melvil Dewey, the proprietor of the Lake Placid Club,” the DEC explained in the UMP. “In the winter of 1904-05, Dewey kept the club open and provided skiing, skating, tobogganing, and snowshoeing for members. The popularity of these winter activities increased in the following years and numerous facilities were developed in the Lake Placid area.

“Several ski trails were developed in what is now the SRWA beginning in the early 1920s when H. Smith ‘Jackrabbit’ Johannsen was instrumental in getting the Lake Placid Club to build a ski trail to North Notch from River Road in Lake Placid. In the following years this trail was expanded to Clifford Falls in Keene where skiers could return to Lake Placid via Old Military Road. Additional ski trails were developed in the SRWA including South Notch Trail, which formed a loop with North Notch Trail via Clifford Falls.

“The former North Notch and South Notch trails were originally developed as ski trails and were some of the earliest dedicated ski trails in the region. They were also used for the 50-kilometer ski race during the 1932 Olympics. These trails were part of a larger ski trail network started in the 1920s by members of the Lake Placid Club. With the establishment of developed ski areas such as Whiteface Mountain in the 1940s and 1950s, the demand for backcountry ski trails decreased substantially and many traditional ski trails (including North and South Notch trails) were abandoned.”

The UMP goes on to say that the trails will not be reopened, largely because doing so would require an immense amount of work combined with the fact that one end of the South Notch trail is now on private land and the western end of the North Notch trail goes through a large wetland. There also used to be lean-tos along each of the two trails that were constructed prior to the ’32 Games.

But while the North and South Notch trails are gone and unlikely to be reinvigorated, the history of the race — the 50-kilometer Nordic ski race — that took place on them remains. The 1932 Winter Olympics (the Summer Olympics that year were held in Los Angeles) took place from Feb. 4 to 13, with the 50K race happening on the last day of the Third Olympiad.

The 1932 Olympics were plagued by a lack of snow, and in an effort to get the games, Lake Placid submitted five potential courses for the 50K race. The North and South Notch trails were selected, and as the games progressed, the viability of the course was called into question.

“Lack of sufficient snow was the main problem confronting the officials, although a fall early in February seemed to indicate that conditions would be right on the day of the race, Feb 13,” the official report for the 1932 Olympics says. “Immediately following the decision of the ground jury as to the course to be used, a crew of workmen began putting the Clifford Falls trail in shape for racing. Start and finish of this race were to be at Olympic stadium.

“Two days before the start of the race, a thaw set in. No great concern was felt by officials, however, at this since under ordinary February conditions in Lake Placid a thaw lasts for only a few hours or a day at most, the temperature remaining around freezing. But during the Olympic winter at Lake Placid all ordinary weather prognostications had to be thrown into the discard. Nothing could be projected on a basis of past experience. Friday, the day before the race, it was still warmer, the temperature rising from 35 (Fahrenheit) in the morning to 47 in the afternoon,” the report continues. “Careful investigation of the 50-km trail showed that a drastic change would have to be made in the course or else the race would have to be postponed. After going over the route, George W Martin, chief of course, felt that, despite the thaw, a section of the course, as originally planned, could be utilized by running a loop of 23.777 kilometers twice, with an extension to the finish, making the total distance 48.239 kilometers. This recommendation was accepted by the jury of terrain as the best solution to the problem. The course furnished an excellent test of skiing skill.

“The 50-km race started at 11 o’clock on the morning of Feb 13. The trail itself was covered with snow sufficient for ski-running, but in many places the snow-covered section was very narrow. By the time the racers were off, mercury began to drop rapidly to a point well below freezing so that no more snow was lost that day. Racers, for the most part, found the skiing conditions good and turned in excellent times for this grueling grind, often called the greatest test of skill and stamina in the entire field of sport, either summer or winter.”

The 50K race (just over 31 miles) was surprisingly close, given the difficult conditions and overall length of the course — the longest race of the games. More than 30 racers who were signed up for the event did not start, but 20 brave souls took on the challenge.

According to the official Olympic Games website, olympic.org, the first two finishers — both from Finland — were separated by a mere 20 seconds in a race that lasted well over four hours. Veli Saarinen took the gold medal in the race, finishing with a time of 4 hours and 28 minutes. Teammate and fellow countryman Vaino Liikkanen took second in 4:28:20, while Norway’s Arne Rustadstuen earned the bronze with a time of 4:31:53. Three Americans also finished the race, with Richard Parsons (5:13:59) placing 15th, Nils Backstrom (5:25:40) in 19th and Robert Harley Reid (5:26:06) in 20th.

“The most exhausting of all Olympic tests, the 50-kilometer ski race called forth all the iron qualities of the men of the Northland who have had a history of skiing for generations,” an article in the Lake Placid News from Feb. 19, 1932 read. “Hot milk, porridge, raw eggs and tea were supplied skiers at the feeding stations but the leaders stopped only once, some of the others feeling the need of the energy-giving food more often especially as they faced a severe gale and blinding snow storm during the last fifteen miles which slowed their pace.” 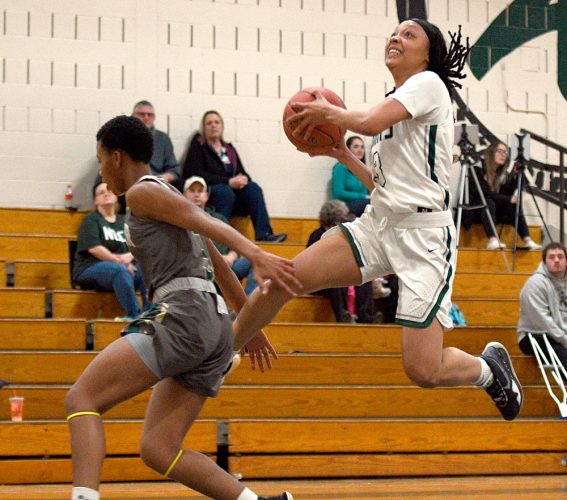 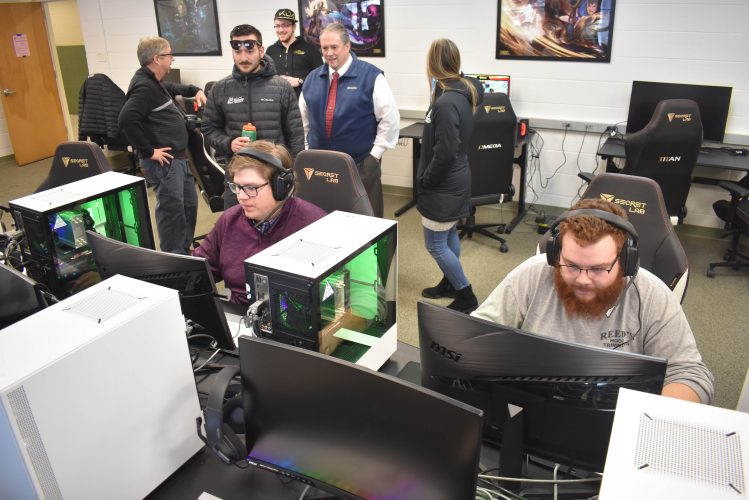