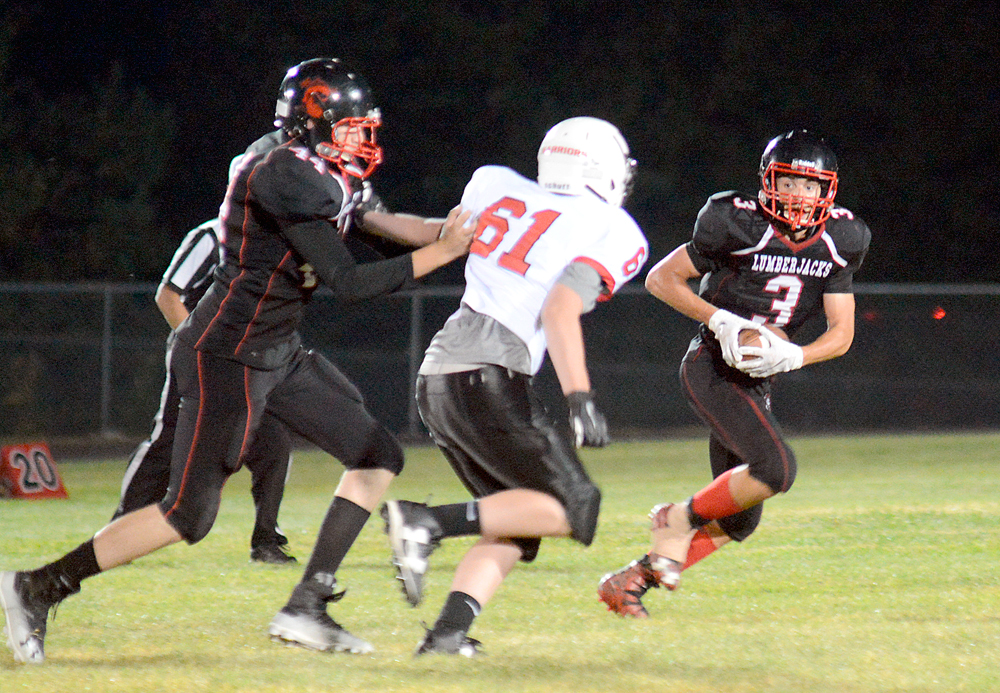 Noah Varden carries the ball for Tupper Lake during its season-opener against Morrisville-Eaton at Frank Tice Field on Sept. 20. The junior has rushed for more than 100 yards in two of the Lumberjacks’ four games this season. (Enterprise photo — Justin A. Levine)

The Red Storm wrap up their regular season on the road Friday, taking on Peru at the Apple Bowl starting at 7:30 p.m. At the same time, The Lumberjacks will be looking for their second eight-man league win in a row when they host Sherburne-Earlville at Frank Tice Field with the opening kickoff slated for 7 p.m.

A week ago, Saranac Lake had the opportunity to clinch the Champlain Valley Athletic Conference regular-season title when it battled Beekmantown on home turf. The afternoon didn’t go the Red Storm’s way as the Eagles surged to a 42-21 victory to successfully defend their league championship. The Red Storm’s biggest issue in that game was pass defense, as Beekmantown junior quarterback Nate Finley torched Saranac Lake’s secondary with five touchdown strikes.

So now, the Red Storm are looking for the next-best outcome in their CVAC final. With a win over Peru under the light, Saranac Lake will finish second in the CVAC and more importantly, lock up a bye in the first round of the Class C playoffs. With all the injures Saranac Lake has faced this season, having next week off should be a huge benefit.

“We control out own destiny,” Saranac Lake head coach Eric Bennett said. “We’d love to have some time to heal up. We want to go down there and win, get the bye and that’s what we’re planning to do.” 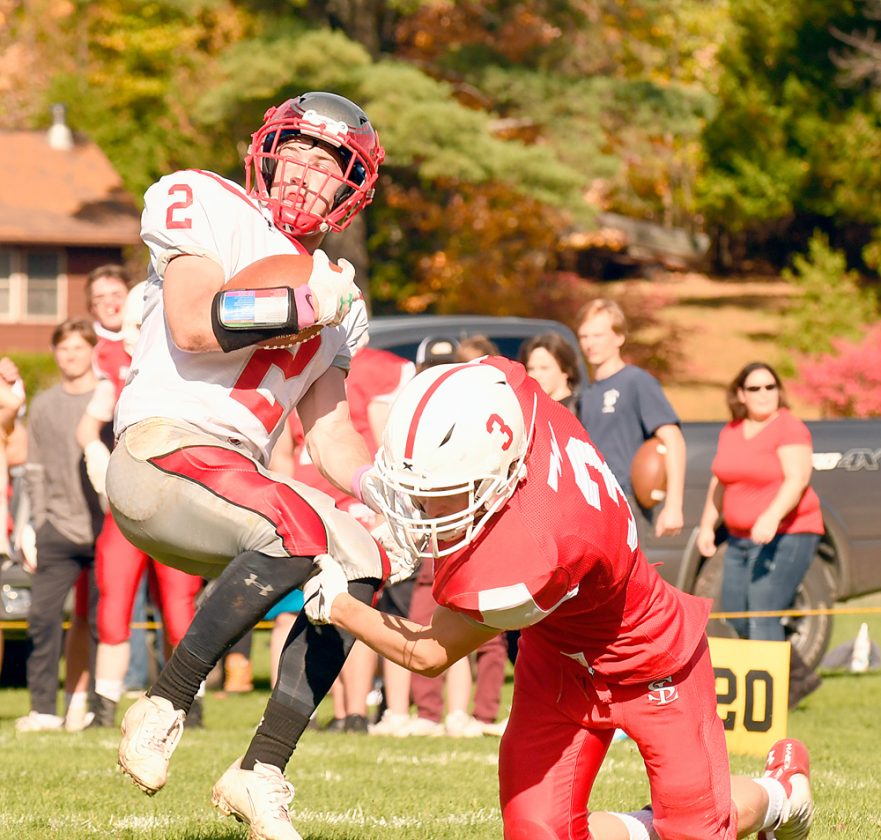 Saranac Lake senior Kenny Dashnaw, right, drops Beekmantown running back Kaden Myers during action a week ago. With injuries piling up on an already small roster, Dashnaw is playing a bigger role for the Red Storm on both sides of the line. (Enterprise photo — Lou Reuter)

Saranac Lake faces a 3-3 Peru opponent that rallied with 21 unanswered second-half points to down Saranac Central 21-11 in its last matchup. Two freshman have emerged as leaders for the Indians as quarterback Zach O’Connell and running back Jack Hanson lead an offense that mixes the pass and the run. Hanson came up big against the Chiefs a week ago, rushing for 181 yards and two touchdowns. Austin Carpenter has been a top receiver for the Indians. A week ago, the led the team with five catches for 56 yards and a touchdown.

Saranac Lake didn’t have a lot of depth to start the season, and its roster has been dwindling ever since. The big loss last week was two-way starter Braden Ryan, who left early in the game with a knee injury and will not be available Friday. Another key player, senior Ben Munn, has been dealing with a thigh injury and may see limited action on offense but should be good to go at linebacker.

“We down three backs right now, so that gives some other kids a chance to step up,” Bennett said.

Junior running back Sam Donaldson could carry much for the load, and senior Isaiah Buckley and Carter Hewitt, who moved up from junior varsity, could also see time running the ball.

This is the first season Peru is playing night games at home, and Bennett expects his players to face a fired-up group.

“We expect them to try to keep us on our toes with a healthy mix of the run and pass on all downs, and I’m sure they are going to play inspired football at home at night at the new Apple Bowl.” Bennett said, adding “We’re looking forward to the challenge. This is a big game for us.”

After being on the road three weeks in a row, Tupper Lake’s football team returns to Frank Tice Field for its second home eight-man game when it clashes with Sherburne-Earlville.

Both teams own 1-3 records and are fresh off their first wins of the season. The Lumberjacks downed Altmar-Parrish-Williamstown 34-14 last week, while the Marauders defeated Pulaski 56-36.

The ‘Jacks got a big-time performance from Noah Varden against APW. The junior running back piled up 191 rushing yards and three touchdowns on 20 carries. Freshman quarterback Jayden Farnsworth has also shown strong improvement. Against APW, Farnsworth went 10-for-14 for 103 yards and one touchdown pass.

Kodee Hill has emerged as a top Lumberjack receiver. A week ago, the senior caught six passes for 69 yards and a touchdown.

Sophomore Beckett Savage is also expected to play a role in Tupper Lake’s ground game, and should be a key defender as well. A week ago, Savage led the Lumberjacks defense with seven tackles.

Klossner said his offensive line also had another solid performance in the team’s first victory a week ago.