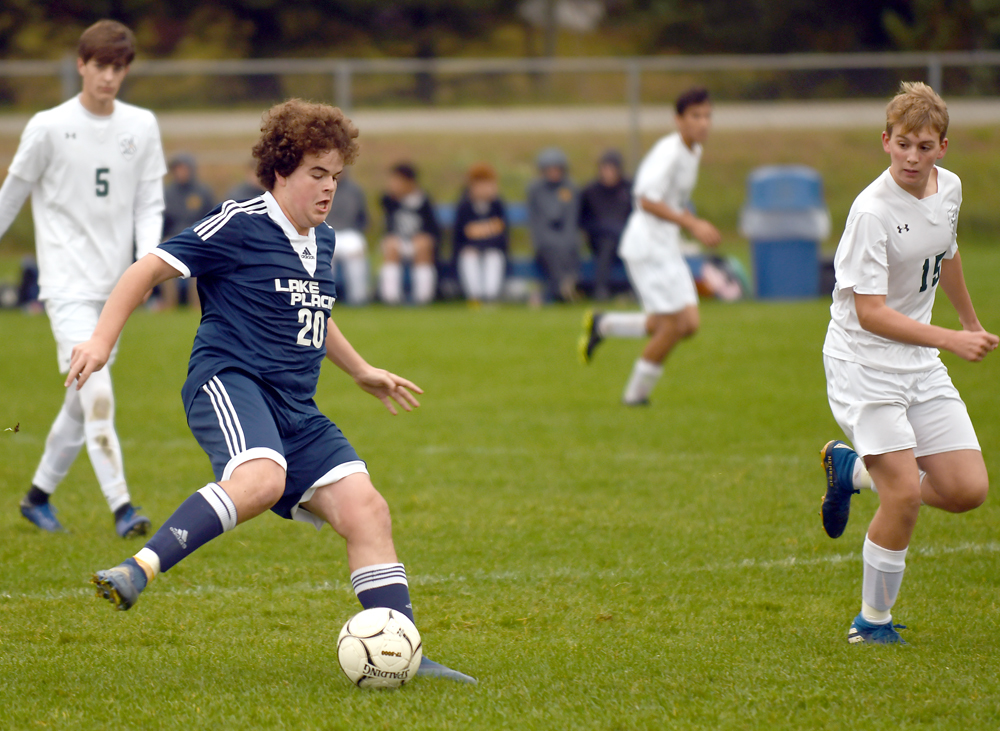 Connor Reid controls the ball for Lake Placid during the opening half of Wednesday’s match against Boquet Valley. (Enterprise photo — Lou Reuter)

LAKE PLACID — The Lake Placid boys soccer team turned in a solid performance from one end of the field to the other on the way to registering a 4-1 victory in a home match Wednesday against Boquet Valley.

Cooper Grady recorded a hat trick in a game that saw Lake Placid race out to a 3-0 lead at halftime. Sebastian Narvaes also scored for the Blue Bombers, Remi Borden and Tristan Spotts recorded an assist apiece and Jack Armstrong and John Brownell each played one half in nets in the win.

Senior co-captain Mckenzie Stephens netted the lone goal for the Griffins, who were playing without three injured starters.

It didn’t take long for Lake Placid to get going on a damp day and a slippery pitch. Grady, a junior, put the Blue Bombers on the board with an unassisted tally less than three minutes into the match. Lake Placid then buried two more shots late in the half to take control.

Narvaes scored with 7:14 remaining to make it a 2-0 game, and Grady sent home his second goal just 37 seconds before intermission on a shot he buried from in close off an assist from Spotts. 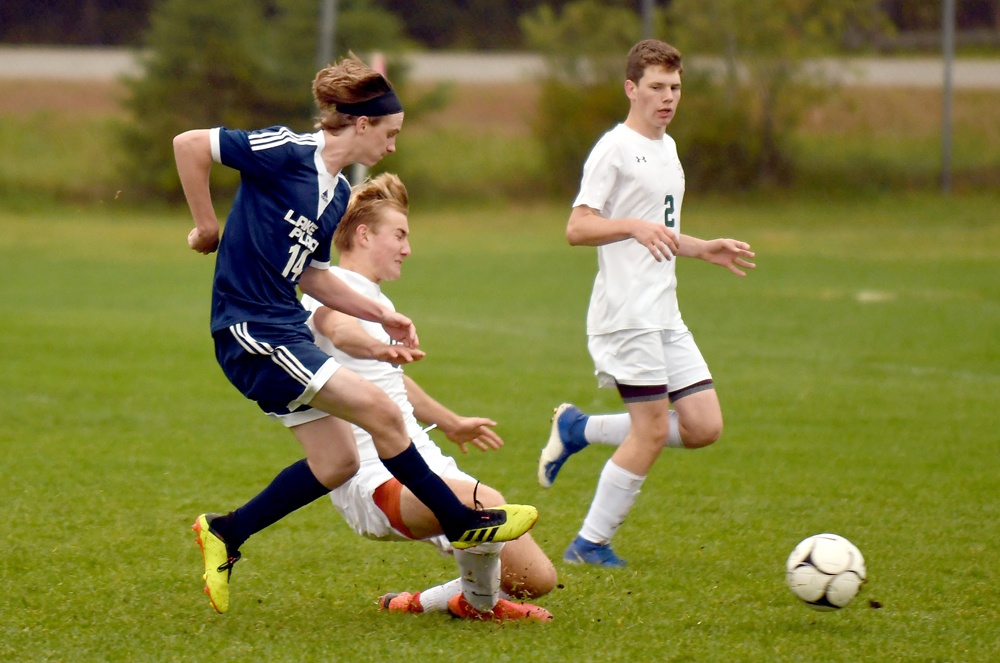 Both teams each scored once after halftime, starting with a goal by Stephens 13 minutes into the stanza that cut the Griffins deficit to 3-1, with Matt Pribble assisting. Grady then ended any hopes of a Griffins’ comeback, scoring his third to put the Blue Bombers on top 4-1 with 16:55 left on the clock. Grady completed a give-and-go on the play with Borden, capping off the connecting by firing a shot from in front of the net past Boquet Valley keeper Brandon Tromblee.

“I was a slippery surface, and the short passes worked for us; in-and-outs, one-twos, playing down the line,” Grady said. “We used our speed to get past them, that’s our big thing. The hat trick was great, really gets your confidence up.”

With the win, the Blue Bombers rebounded from Monday’s 3-0 loss at Chazy and improved to 4-3-2 in Northern Soccer League Division II action.

“I was more interested in us playing well together than who was our goal scorers,” Lake Placid coach Stuart Hemsley said. “I told the guys yesterday this is perfect weather to play soccer in; nice greasy surface, ball flies around, pass to feet and you’re not chasing it. We didn’t chase the ball today.”

“Matty Brandes was nice and tight in the back, and Pat Manning was great today at central midfield,” Hemsley said.

Although it may not have made a difference considering how well the Blue Bombers played, Hemsley admitted the Blue Bombers were taking on an injury-riddled opponent. The teams finished in a scoreless deadlock the first time they met up this season on Sept. 10.

“We’ve got some key seniors who are out, three starters, so it wasn’t ideal conditions for us,” Griffins’ coach Evan George said. “Certainly we’re a little depleted at the moment but not an excuse. Lake Placid, they were aggressive, they were strong going forward, they were taking their chances. On a field like this when conditions are slick you need to take your shots on goal, and they did that. They caused a lot of problems in the back and made us scramble a little bit. We just weren’t able to produce the chances that we were hoping for today.”

The Griffins dropped to 2-3-4 and next play Fridayat Chazy.

The Blue Bombers will have a non-league match at home Monday against Section X’s Massena starting at 4 p.m.

“When we play a Section X team, it’s normally in a regional game,” Hemsley said. “When they called looking for a match, we had space, so yeah, we took it. It should be a fun one.”

SARANAC LAKE — A good effort on another wet field in the North Country didn’t produce a win for the Saranac Lake boys soccer team, but it didn’t end up as a loss either as the Red Storm and Peru battled to a 0-0 deadlock at Schroeter’s Field.

Saranac Lake was blanked 4-0 when the teams clashed in their initial meeting this season in Peru, but this time, coach Josh Marlow said his team had the upper hand in the Northern Soccer League Division I match that lasted 100 minutes.

The Red Storm owned a 19-13 edge in shots, including three that came ever-so close to making their way in the net. During the second half, Bryson Mariano ripped an attempt off the crossbar, Dylan Amell banged a shot off a goal post in the first overtime and in the second overtime, Peru keeper Michael McBride made a leaping save to tip the ball over the crossbar on a shot by Saranac Lake’s Brady Yando.

McBride finished with seven saves for the Indians and Zach Churco registered nine saves in nets for the Red Storm.

“It was a great game. I’d say we had a lot more chances than they did,” Marlow said. “We played physical, we played smart, we just didn’t bury one. This team beat 4-0 a month ago, and I think we’ve really turned it around since then.”

Saranac Lake was playing without starting defender Patrick Wamsganz, and also lost its leading scorer, Nick Kelting, for the second half after he was injured earlier in the game.

Saranac Lake is now 2-5-1 in Division I action and 4-5-1 overall. The Red Storm was coming off a double-overtime loss Monday at Northeastern Clinton, which is ranked 17th in the state in Class B.

“We had some early wins, and then we had some losses, so if you take out that early part of the season, I really like where we are right now,” Marlow said. “We’ve had four or five really good games in a row. We’re playing really well.”

The Red Storm next travel to face Plattsburgh Friday in a match starting at 6:30 p.m. Saranac Lake returns home Monday to take on Saranac Central in a senior day contest starting at 4 p.m.