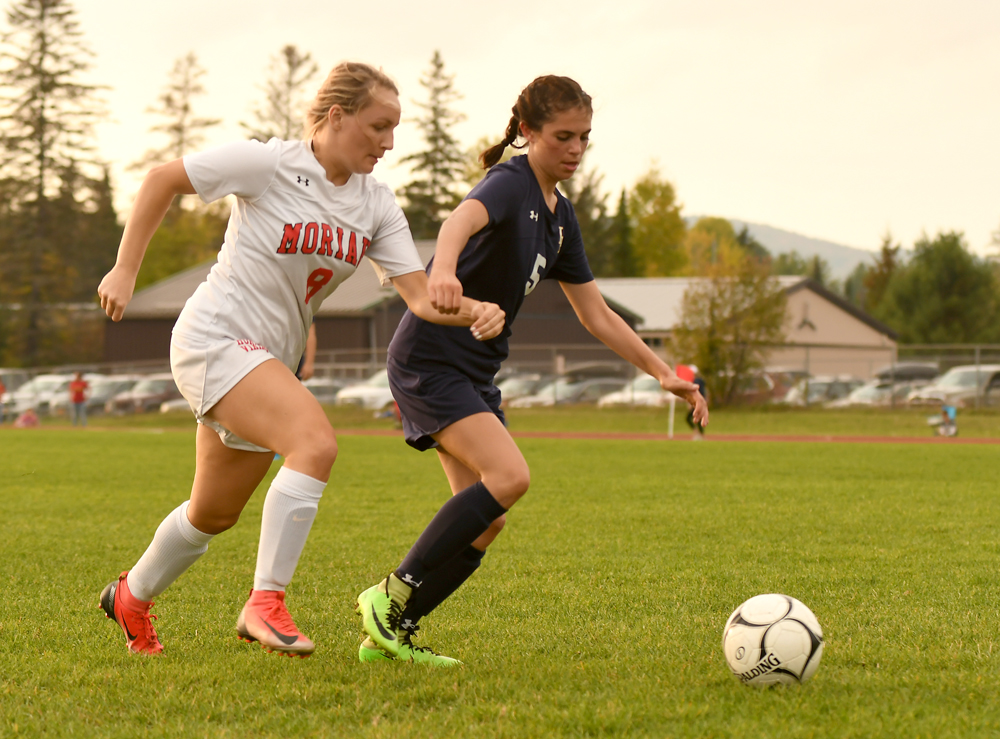 LAKE PLACID — Considering its decimated roster, a 1-0 home loss to Moriah on Tuesday turned out to be a pretty good showing for the Lake Placid girls soccer team.

A goal by Sage Baker during the middle of the first half was all that the Vikings needed to claim a Northern Soccer League Division II victory over the injury-riddled Blue Bombers, who were missing three starters and were forced to bolster their roster by moving two players up from the modified team.

Baker scored on a booming kick at the 25:45 mark of the opening half on a Vikings counter after the Blue Bombers got caught deep at the other end of the field while they were attacking.

Three of Lake Placid’s best players, midfielder Natalie Tavares, Rylee Preston and Olivia Ferebee all sat out the match with injuries. Tavares and Preston are expected to return to the lineup, but Ferebee, who leads Division II in scoring with 13 goals, is done for the season with a leg fracture.

Despite scoring just once, Moriah had a number of other great opportunities to add to its lead. The Vikings finished with a 30-13 edge in shots, including one in each half that ricocheted off a crossbar, and a bundle of close-in shots that were stopped by senior goalkeeper Brooke Paries, who had a terrific performance in nets for Lake Placid. 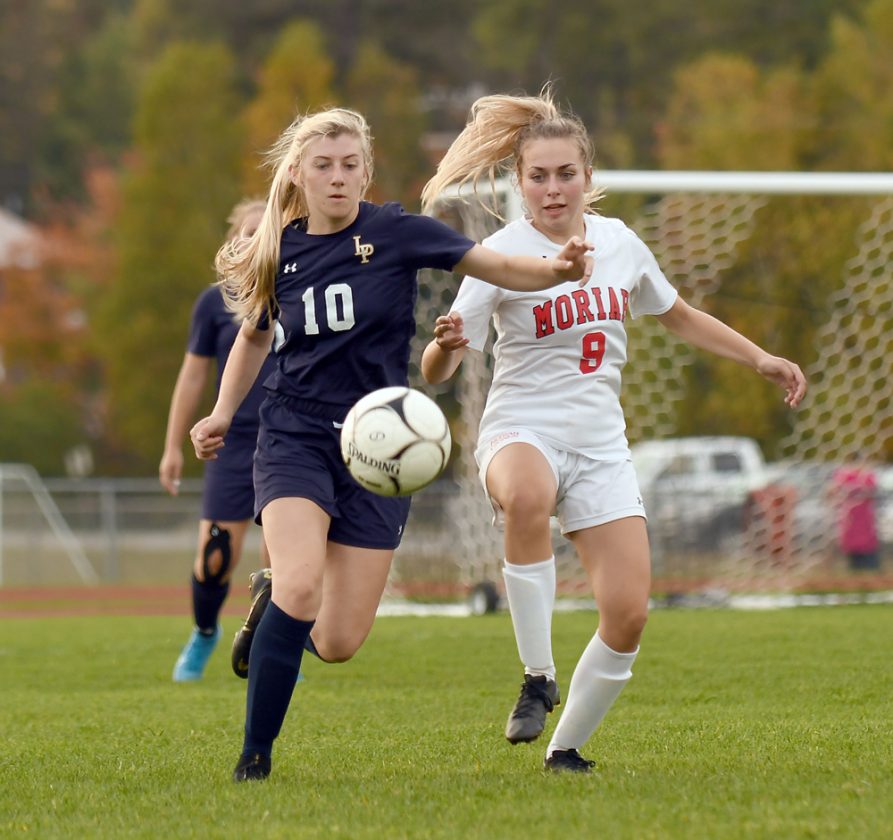 Lake Placid’s Shannon Bentley and Moriah’s Reagan Garrison battle for the ball during the second half of Tuesday’s match in Lake Placid. (Enterprise photo — Lou Reuter)

Although the Blue Bombers didn’t generate a lot of opportunities, they did make some runs at the Vikings’ net during both halves but came up empty

“You’d think that we’ve been through D-Day,” Lake Placid head coach Heather Brewer said. “With the people we have out, we played well today. Considering we were missing three starters, and we had two new kids from modified playing today, we kept moving forward. We played hard as a team, we had our chances, and Brooke saved a lot.

“Moriah is very dangerous,” Brewer added. “They have at least three players who could really put us under pressure. At this point, we have to kind of weather the storm and then make it to playoffs and then hopefully be healthier.”

“I think we tried to stay as optimistic as possible,” said Blue Bombers co-captain Shannon Bentley, who was celebrating a birthday on Tuesday. “It’s a little hard to regroup after going out on the field with a new team again and again. But, I think after a few practices we should be back to somewhat where we were, hopefully. I think we played pretty well today.”

“Their keeper did a nice job for sure,” said coach Christina Slattery, whose Vikings improved to 7-3 in league play. “I think near the end of the game, the mindset of our girls was we’re just going to defensively keep it out of our end. When you’re up by one goal, you have to protect.”

Samantha Hayes recorded five saves while earning the shutout win in goal for Moriah. Paries, a senior co-captain, made 18 saves in her standout effort in nets.

The Vikings will be at home Thursday to face Chazy.

Lake Placid, which suffered its second straight setback, fell to 5-4 in league action. The Blue Bombers will next be on the road Thursday at Northern Adirondack.