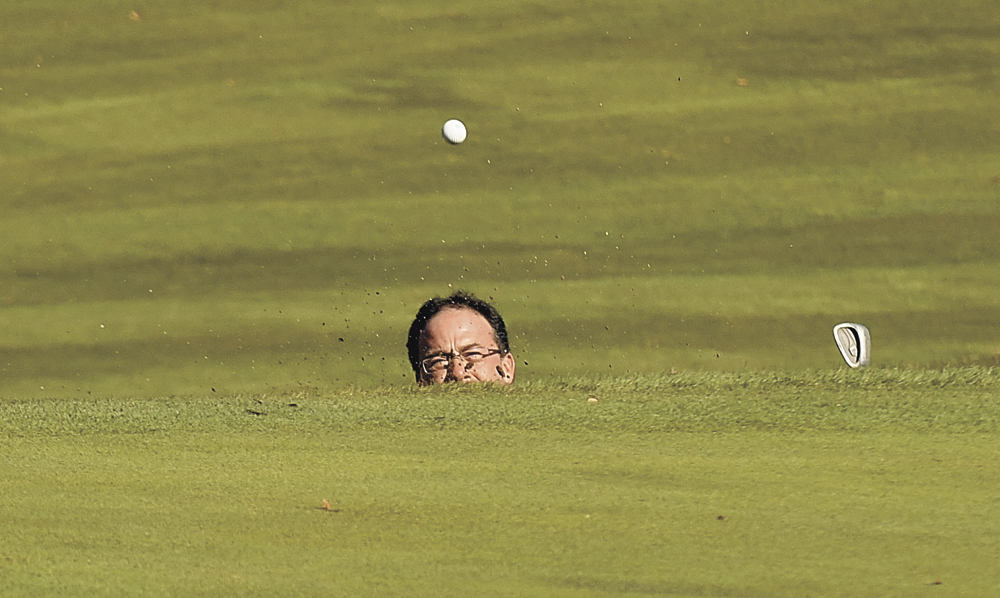 SARANAC INN — A bittersweet day but a beautiful one.

On Sunday, the Saranac Inn Golf Club put another season in the books by closing the course for winter in its traditional fashion — with the 6-6-6 tournament.

The season at the course extends from late spring until the day before Columbus Day, and on the final day of play at the historic layout, golfers come out in droves for the event, especially this October due to the stunning and warm fall weather cherished by all.

One of the big keys to success on Sunday was keeping the ball in the fairway. Normally, shots that stray a little bit into the rough still could be good ones on most holes at the course, but at this time of year, that all changes. Shots sent into the rough that could have been just fine a month ago often ended up as a lost ball buried in the fallen leaves on Sunday. 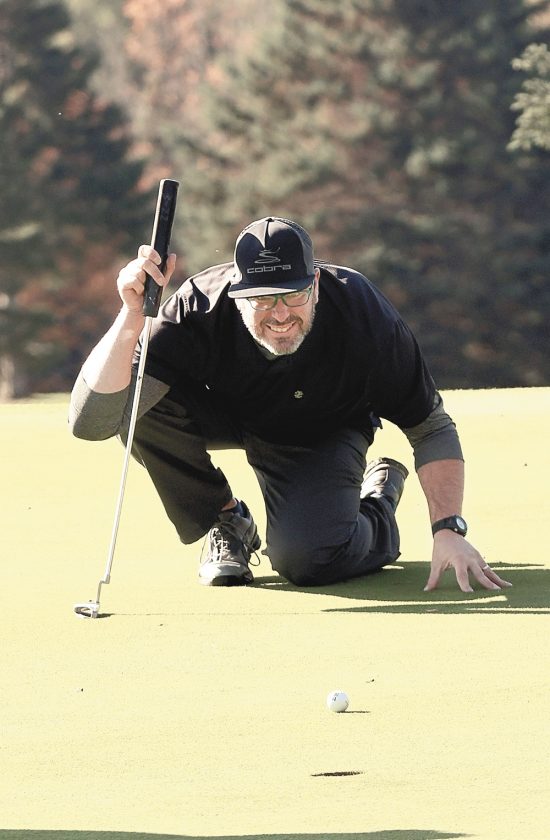 A large field of 88 golfers played on 44 teams this year, and Saranac Lake alum and former Red Storm golfers Tristian Fitzgerald and Tanner Manning took the title with a 2-over par 74. They were among 10 teams that shot rounds in the 70s, and the pair triumphed by one stroke over Jim Strack and Tom Nieberbuhl. Another three teams fired rounds of 76 to finish in a three-way tie for third place.

Fitzgerald and Manning have spent some time golfing together and competing in tournaments over the summer. They prepared during the week leading up to Saranac Inn’s last hurrah and were hoping to win on Sunday. Both said they enjoy playing the varied format.

“We played really well. I think alternate shot really helped us out,” Fitzgerald said. “We practiced that throughout the week.”

“We love alternate shot,” chimed in Manning with a grin. “We do that for fun all summer long. You can lose a lot of friends playing alternate shot.”

Manning and Fitzgerald played in a similar format tournament over the summer, competing in the two-day, 36-hole Adirondack Shootout at Tupper Lake. They struggled and looked at Sunday as a time for redemption. 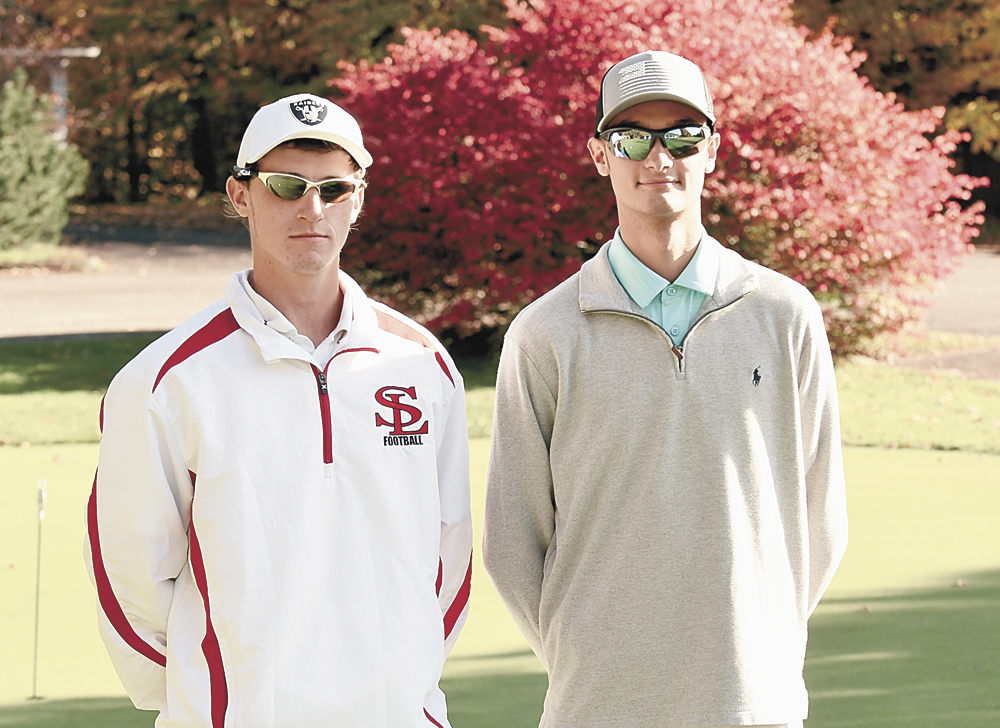 Tristian Fitzgerald, left, and Tanner Manning won this year’s 6-6-6 tournament with a round of 74. (Enterprise photo — Lou Reuter)

“We were bad and wanted revenge,” Manning said. “We didn’t do well. We love this format, and that’s what made us mad. We came into this tournament really wanting to play better.”

And the pair did. Although they did put two double bogeys on the scorecard, the rest of their holes included a single bogey and pars or better.

“When we came in to the club house, we knew we had a chance,” Fitzgerald said.

While Fitzgerald and Manning, as well as some other teams, were looking to win, other golfers just came out to wrap up their seasons on a beautiful day, as well as bid a fond farewell for the season to Saranac Inn, which is one of the most meticulously manicured layouts that can be found in the North Country.

Golfers came from across the Adirondacks, the Champlain Valley, other spots around the North Country and even Canada for one more great day on the course, and also to say ‘Thank you’ to Saranac Inn owner Jim Connors, who started the tournament more than a decade ago. 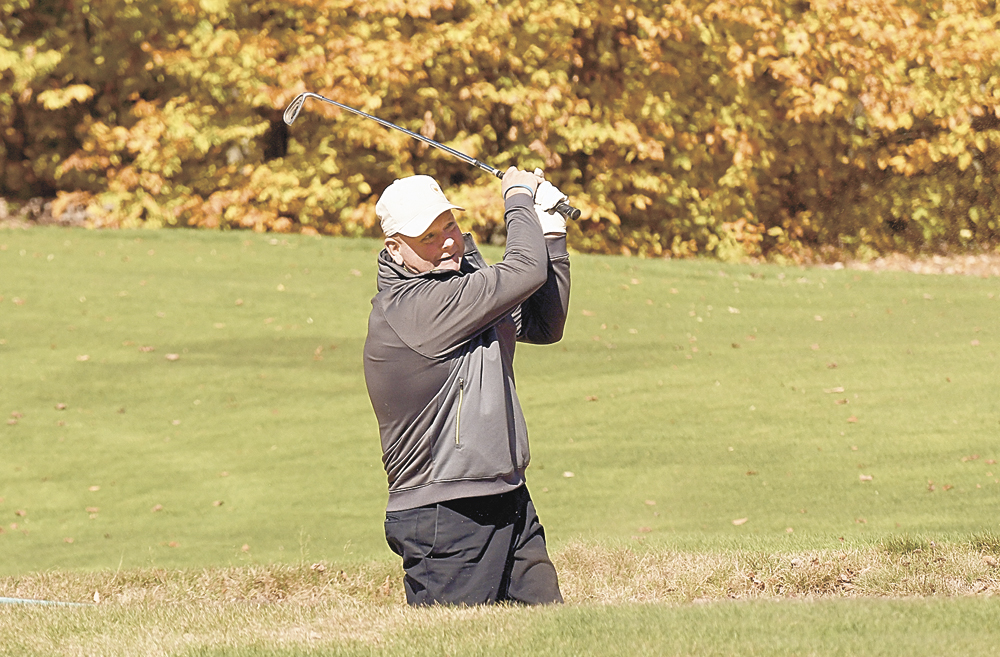 Billy Diernas hits out of a sand trap on the 18th hole at Saranac Inn on Sunday. (Enterprise photo — Lou Reuter)

“It’s a great tournament. It’s a lot of fun,” Connors said while soaking up the sun on the clubhouse deck after the event ended. “At the end of the season, we were looking to do something fun. We went with the two-person and we did the three different formats. I guess it comes down to who can handle the alternate shot the best. That’s what separates the golfers. The alternate shot is what makes or breaks everybody.

“All different types of players come here for this tournament,” Connors added. “It’s not all about winning.”

After most of the golfers headed home after their rounds and the post-tournament dinner Sunday, Connors looked over the green, green layout as the last few participants were bidding him their good-byes for the season.

“Weather-wise, you couldn’t have beaten today, and the course, too bad we’re putting it to bed because it’s still in great condition,” he said. “We’ll start aerating tomorrow.” 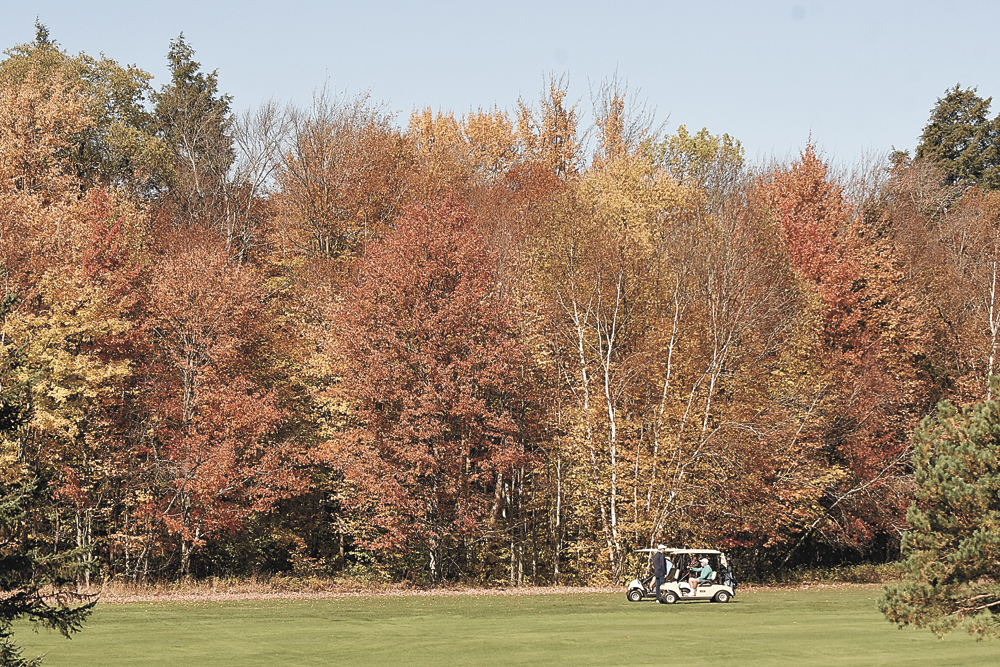 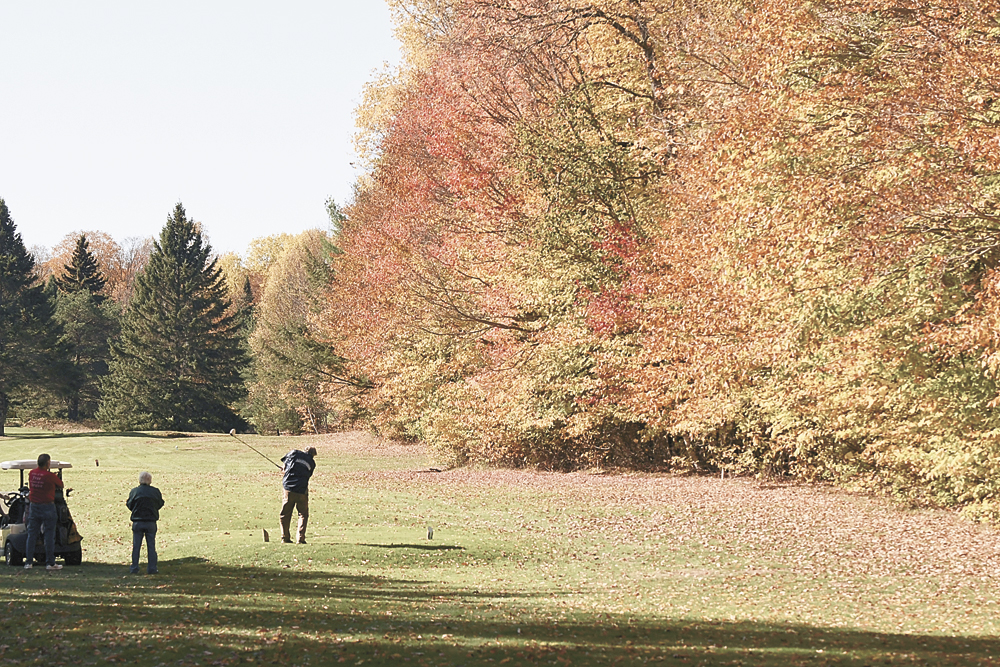 A golfer tees off while nature blends its afternoon shadows with sunlit fall foliage on the ground and still in the trees. (Enterprise photo — Lou Reuter) 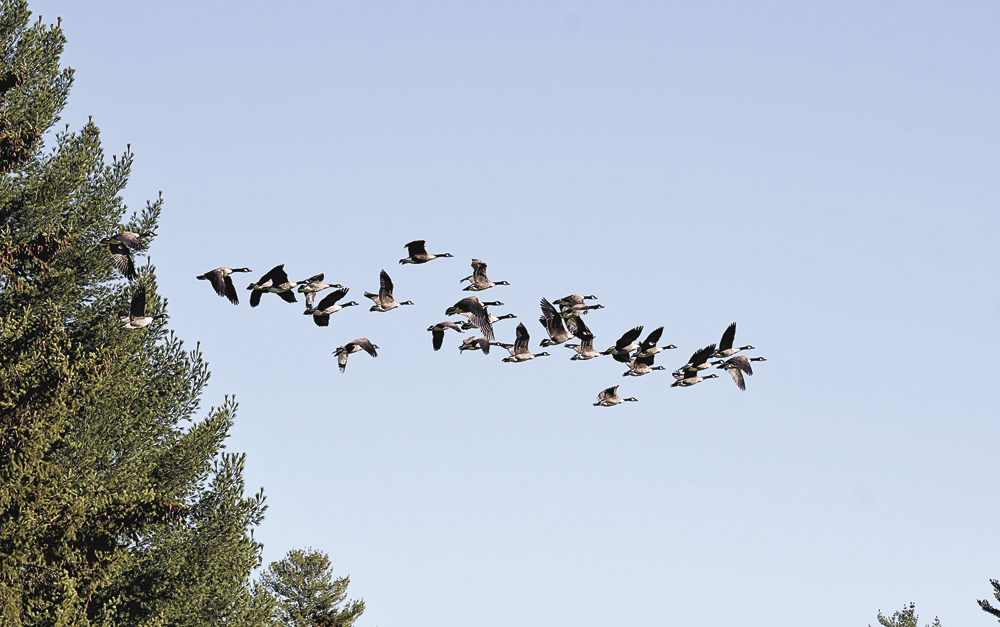 Canada geese take a low flight path through pine trees and over a fairway while heading in the direction of Upper Saranac Lake. (Enterprise photo — Lou Reuter)