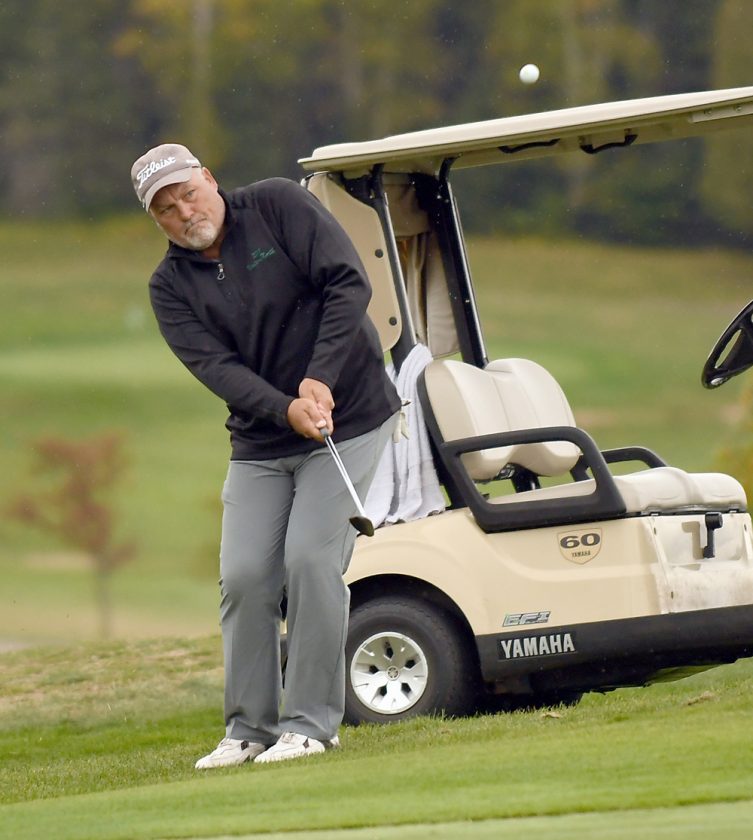 Bart VanLeuvan fires a chip shot during the second round of the Craig Wood-Ray Randall golf tournament on Sunday. The golfer from Rouses Point captured his first title in the event, winning in a three-way playoff. (Enterprise photo — Lou Reuter)

A first-place tie between three golfers forced a playoff on Sunday, and after three tightly contested playoffs holes, Bart VanLeuvan emerged the winner with a birdie on the ninth hole.

VanLeuvan, along with Kahnawake, Quebec golfers Josh Kirby and Ky Horn, finished tied at the top of the field with six-over par 150 totals after 18-hole rounds played on Saturday and Sunday. The trio then played the par-5 ninth hole three times. All three finished with pars on their first and second go-rounds, and the third time was then the charm for VanLeuvan, who was the lone golfer to knock down a birdie.

VanLeuvan, who captured the club championship at the North Country Golf Club in Rouses Point in August, has been eyeing a Craig Wood title for years. In 10 trips to the tournament, he finished runner-up once and has been in contention for the win a few more times. He got the job done with a 73 Saturday and a 77 on Sunday that was followed up by his third-playoff hole birdie.

“Winning this has been on my list,” VanLeuvan said. “I’ve finished second, I’ve been in the final group three or four more times, and today, this was my first. It’s great. I like playing here and I love this course. One of the best things about this tournament is meeting new friends. It’s a great group of golfers.” 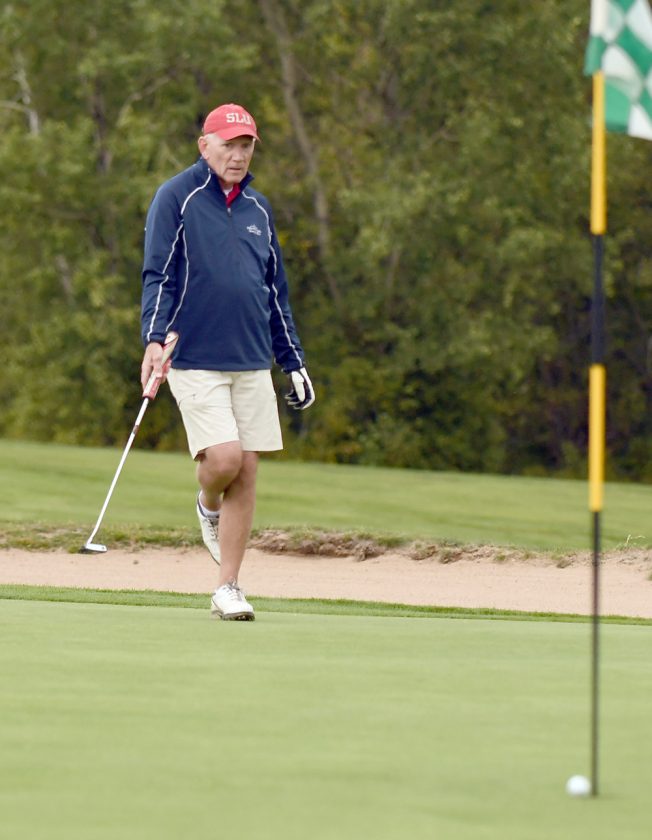 On Sunday, VanLeuvan played in the last foursome of the day. He was joined in that group by Kirby, a two-time Craig Wood champion who set a course record of 62 on the first day of the tournament when he last won the title in 2017; Nolan Reid, a 2013 graduate of Northeastern Clinton, and first-year tournament visitor; and John Coppa.

Reid, who was driving some bombs off the tee of more than 350 yards over the weekend, was the leader heading into Sunday after firing a 1-under par 71. VanLeuvan stood in second with his 73 and Kirby and Coppa were four shots back with 75s.

Horn made a big climb to the top during the second round after finishing with a 78 on Saturday. As it turned out, Horn was already wearing his sandals when he was called out of Craig Wood’s clubhouse and told he’d be in the playoffs after his final round even-par 72 was the lowest score of the day.

Kirby, last year’s runner-up, and Horn both had opportunities to win outright during both of the first two playoff holes but missed birdie putts that would have been clinchers.

Reid, who played in the state high school golf championships at Cornell during his days competing as a NCCS Cougar, finished fourth. He was one stroke away from joining the top trio in the playoffs after finishing with a 151 total. 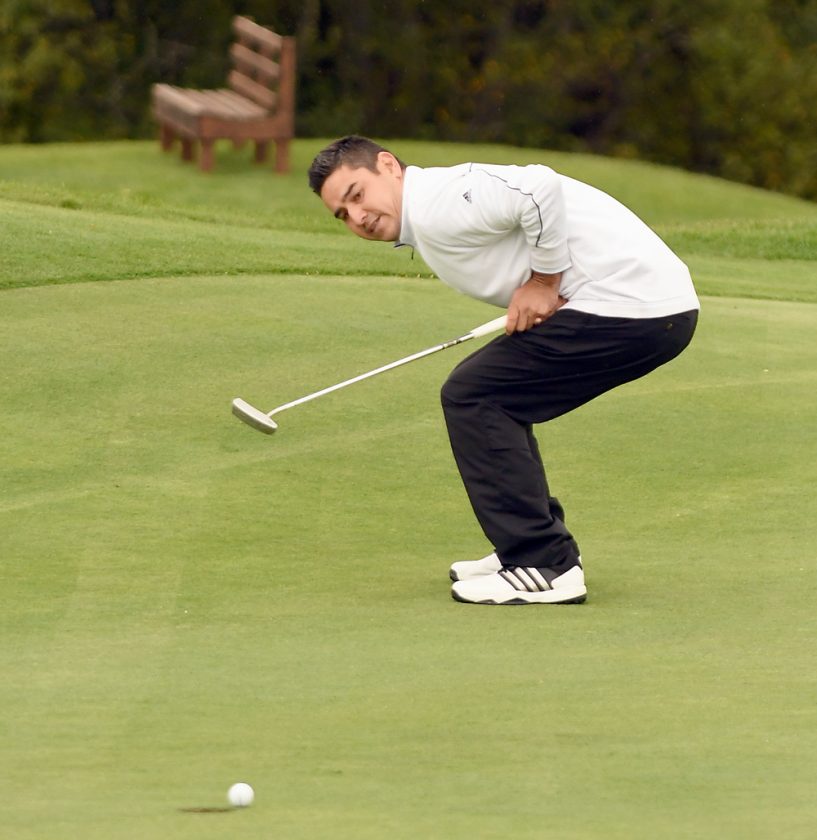 Josh Kirby reacts after narrowly missing a birdie attempt on the first playoff hole on a shot that would have been worth another championship at Craig Wood. (Enterprise photo — Lou Reuter)

“I played aggressive yesterday, I was too careful today,” Reid said.

VanLeuvan said it was fun watching and battling it out with some long hitters over the weekend.

“The way those guys hit, you really have to pay attention,” he said. “I just kept the ball in play. I got up and down around the greens really well, and that’s what did it for me.”

Lake Placid’s Brad Griffin is no stranger to winning titles at Craig Wood. He’s claimed championships in both the open and senior Ray Randall divisions but said it’s been awhile since he last came out on top. After finishing the Ray Randall’s runner-up in 2018, Griffin took the win over the weekend and wasn’t really threatened along the way. Griffin claimed first place with consistent rounds of 74 and 73 and a 147 total.

Rochester’s Andrew Haefner placed second with a 157, and Tom Fox and Larry Zygo finished tied for third with 159 totals.

Griffin and Zygo, who also lives in Lake Placid, were tied for the Ray Randall lead heading into Sunday after shooting 74s on opening day.

“Larry putted the eyes out of it yesterday,” Griffin said. “My scores weren’t great, but overall, I played solid; just made a couple mistakes coming in.”

Griffin said his first time competing in a golf tournament was back in 1962 or ’63, and added it’s the one sport of the many in which he has competed where he’s done well.

“It’s always fun to win,” Griffin said. “I’ve played all sorts of sports and golf is the one that grabbed me. Personally, I think it’s the greatest sport of all.”

This year’s Craig Wood-Ray Randall tournament featured a starting field of 113 golfers, which was an increase of 14 over the number who competed in 2018.

Karl Zaunbrecher and Veronica Byers, formerly of Saranac Lake, pedal along River Road in Lake Placid during a ...