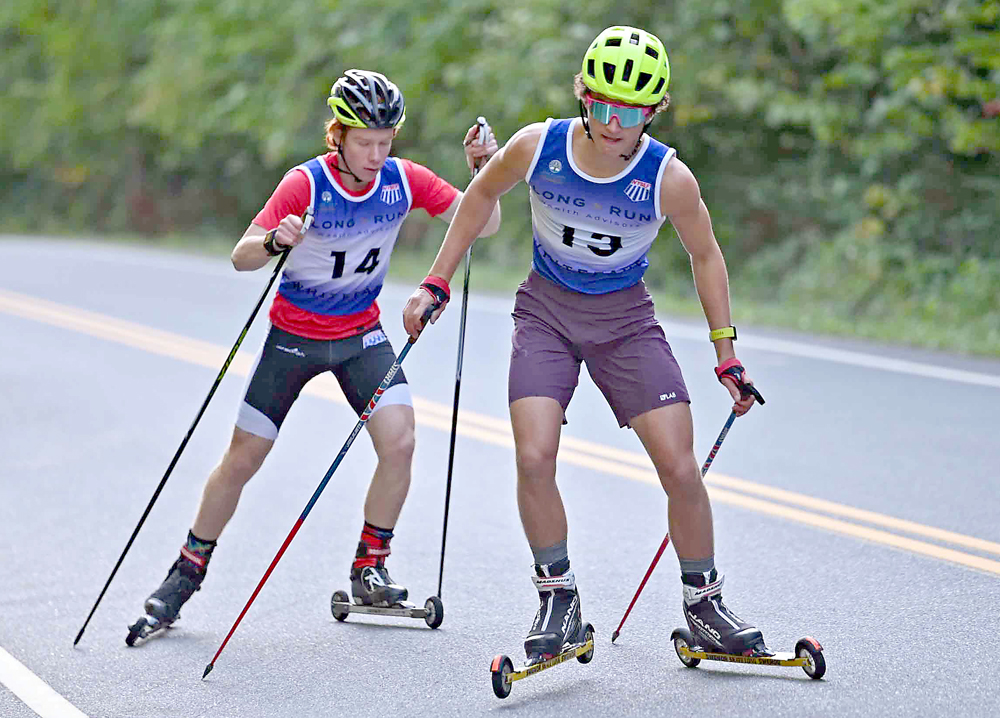 Van Ledger, left, and Elvis McIntosh work their way toward the top of the Whiteface Mountain toll road during Sunday’s race that was part of the two-day Adirondack rollerski mini-tour. Van Ledger, a NYSEF skier from Lake Placid, placed ninth in the race. (Provided photo — Kelle Rose, NYSEF)

LAKE PLACID — The Adirondack rollerski mini-tour ramped up this past weekend outside Lake Placid. As part of the drive to draw more skiers to the rollerski series, Saturday included a two-race format known as a doubleday event, consisting of a 3-kilometer skate prologue followed by a 1.5k cross-country cross featuring several agility segments.

Athletes earned a reward for performances in each event. Both events were individual start and their aggregate times were used to form a pursuit start for the first wave of the Climb to the Castle on Sunday.

This tour was coordinated by the New England Nordic Skiing Association and the New York Ski Educational Foundation, in partnership with the Olympic Regional Development Authority. 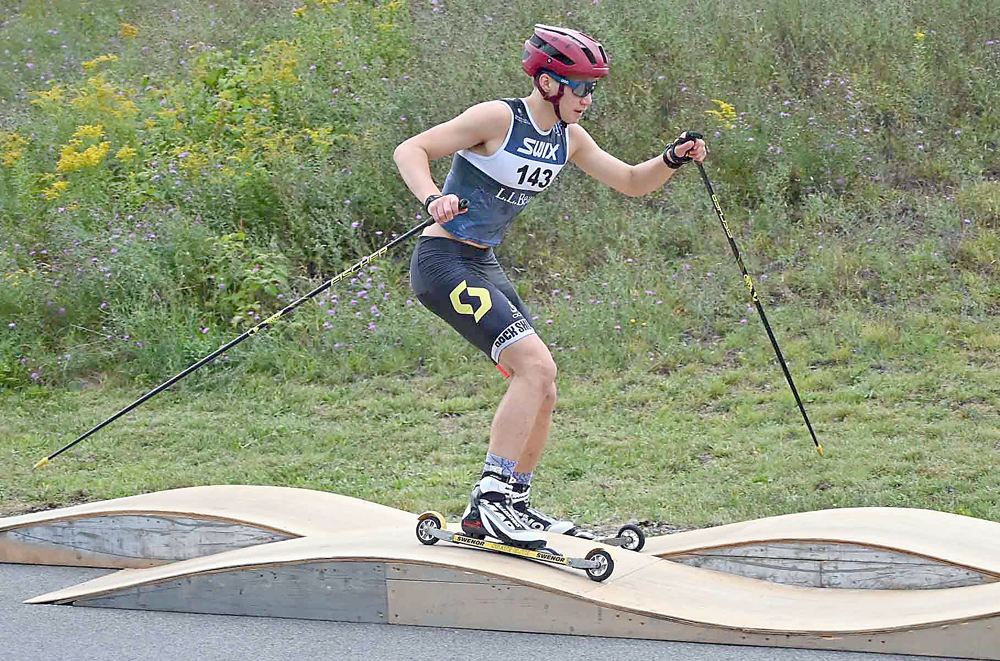 Both of Saturday’s races were located at the Olympic Jumping Complex while between races, NENSA’s Justin Beckwith and NYSEF’s Shane McDowell assembled the undulating ramps that constituted the agility segments for the sprint prologue. At each agility segment, if an athlete couldn’t ski the obstacle, there was a safe alternate route that penalized skiers — similar to a penalty loop in biathlon. 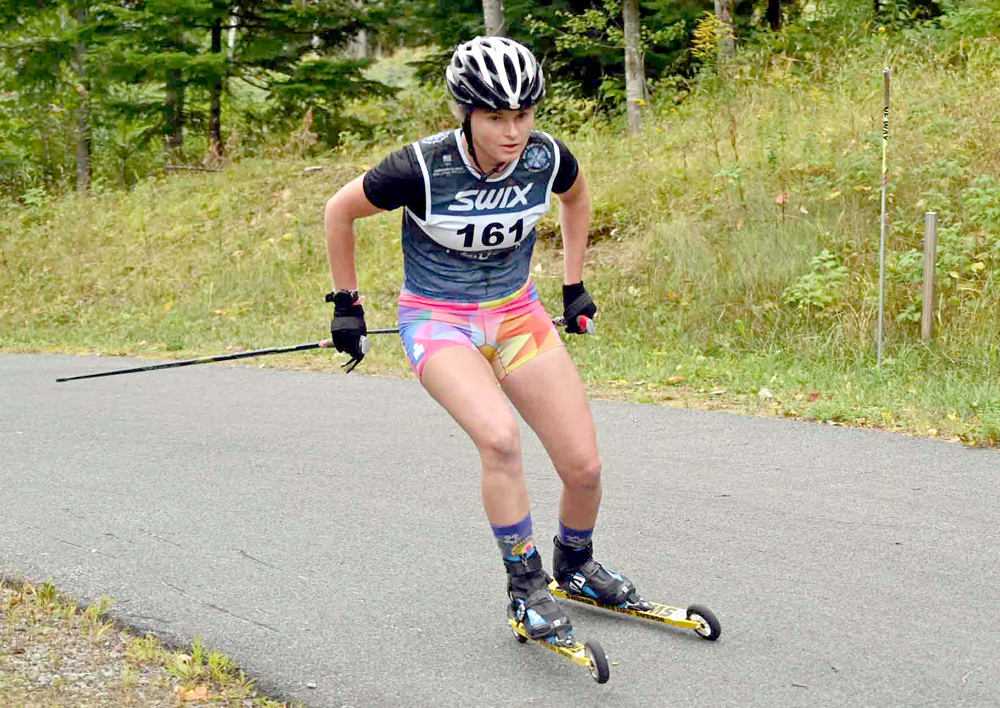 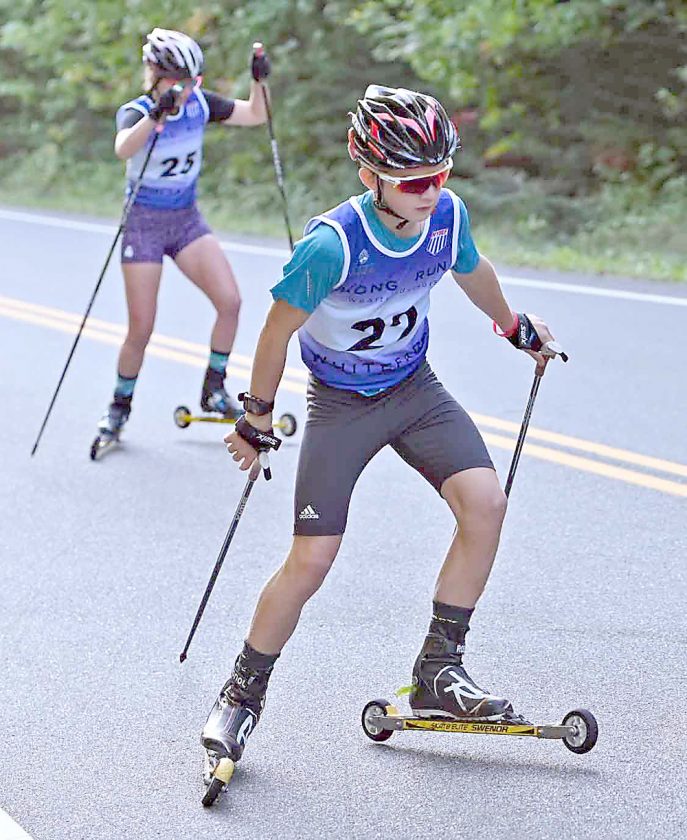 Tate Frantz, of Lake Placid, competes in the Climb to the Castle at Whiteface Mountain. (Provided photo — Kelle Rose, NYSEF)

Climb to the Castle

Sunday’s race ascended the Whiteface Mountain toll road for 5 miles at an average grade of eight percent. At 4,867 feet, Whiteface is the fifth highest peak in the Adirondacks.

Skiers who competed in Saturday’s doubleday races went out first, starting in a pursuit format based on their aggregate times. Doubleday finishers started at 8 a.m. Open athletes started in a mass start wave at 8:06, with masters following at 8:08.

“It was really fun. I’ve done this race a lot of times and it’s always really hard,” Lucy Hochschartner said. “But it was great to have nice weather and lots of good people to race against. I didn’t do so great [in the doubleday] so I got to move up a little bit. And not dying at the very end was fun. The wind definitely made for a slow finish.”

“I haven’t done [C2C] in quite a few years,” Armstrong said. “It was fun. My plan was to work into it and hopefully not die before the finish line. It was really fun having people all around you.”

Climb to the Castle NYSEF finishers: