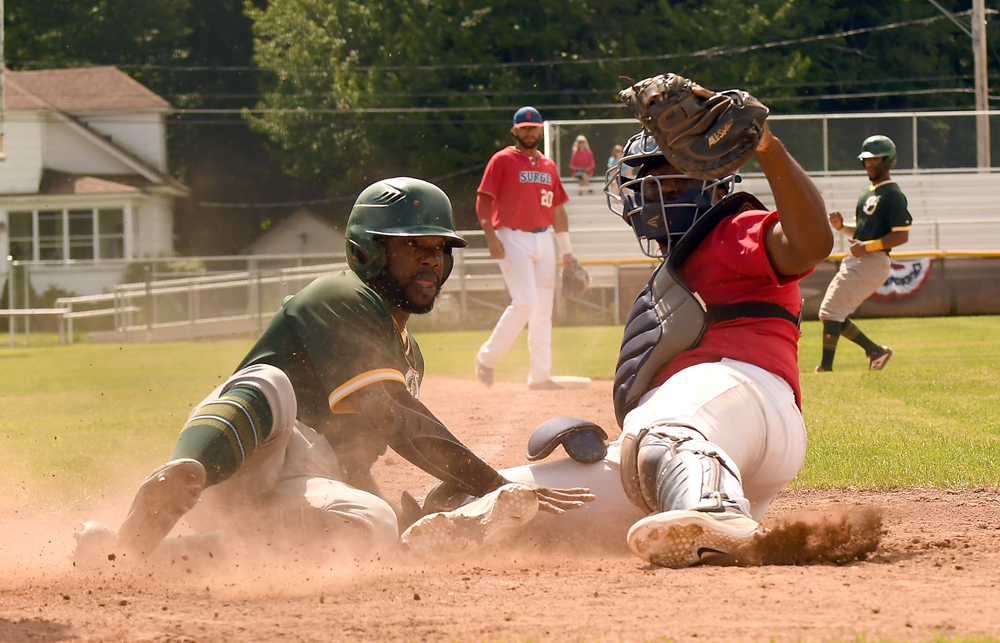 Saranac Lake Surge catcher Stephen Octave tags out New York’s James Dockery in a collision at the plate in the top of the seventh inning Tuesday in Saranac Lake. (Enterprise photo — Lou Reuter)

SARANAC LAKE — The Saranac Lake Surge’s second homestand of the season didn’t start off the way the team expected, but it did end with a victory, although it wasn’t against an opponent that was originally on the schedule.

After returning from a four-game road trip in New Hampshire, the Surge were back on home turf at the Petrova Avenue field Tuesday afternoon and claimed a 7-4 win over the New York Bucks in Empire Professional Baseball League action.

Saranac Lake was originally slated to begin a four-game series with the Puerto Rico Islanders, but that team was unable to get to the North Country in time after flight delays following its most recent series played at home in the Caribbean.

So instead, the New York Bucks, who have been based in Plattsburgh, were asked in a Tuesday morning phone call to visit Saranac Lake for a matchup.

The Bucks only had one victory coming into the game, and put up quite a battle before falling in a close game that ended in the top of the ninth with two Bucks runners left on base. The Surge fell into a 3-1 hole after one inning of play, but took the lead for good when they put three runs across the plate in the bottom of the third to jump ahead 4-3. 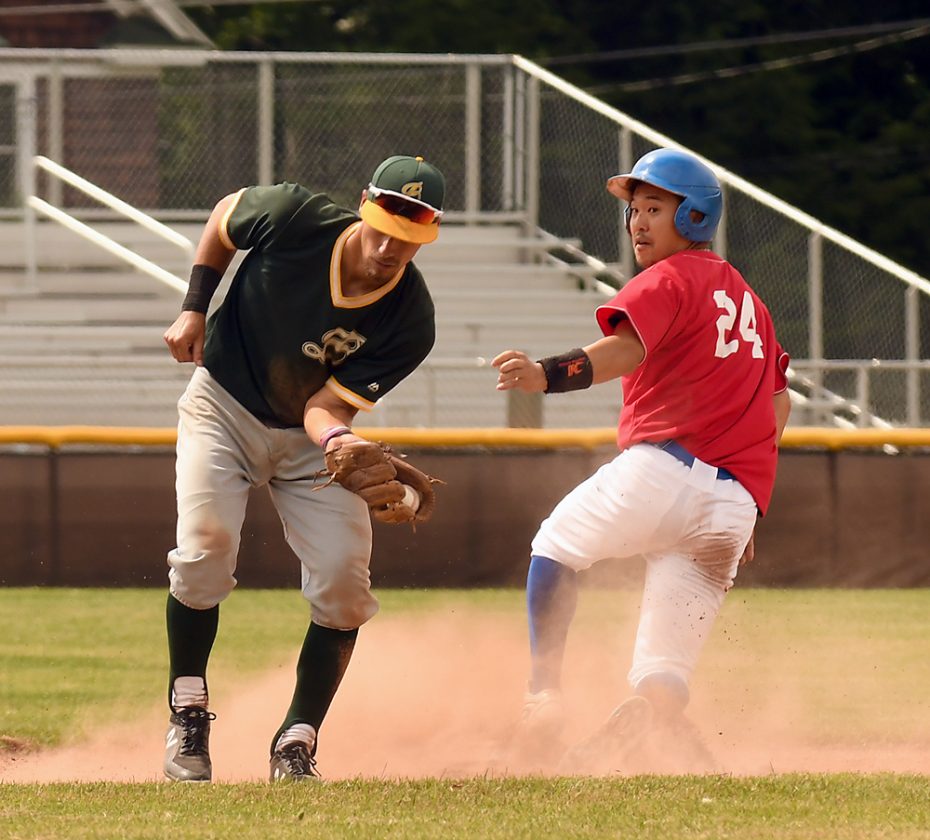 Hiroki Itakura recently joined the Surge from his home in Japan, and came up big at the plate playing his third game with the team. The 28-year-old sent a homer over the right field fence with two outs in the bottom of the first to put the Surge on the board, and then knocked home two more base runners with a double during Saranac Lake’s three-run bottom of the third. Third baseman Daniel Dominguez then drove home his teammate with a back-to-back double for the Surge’s 4-3 lead.

Saranac Lake tacked on two more runs in the fourth to gain a 6-3 edge, and the teams then scored a run apiece in the sixth to move the score to 7-4. The Bucks put base runners on in the final three innings but came up empty.

The win was the second straight for Saranac Lake, which won 7-2 Sunday in New Hampshire to avoid being swept in a four-game series against the Wild. The Surge improved to 10-12 with Tuesday’s win.

“Our pitchers got it done, and we hit the ball,” Surge manager Ken Matsuzaka said. “A big win today.”

Despite the loss, Bucks manager Derrick Pyles was happy with what he saw from his squad, with the exception of a couple of defensive miscues.

“We got a phone call at 8:30 this morning saying come to Saranac Lake,” Pyles said. “I think my guys were ready. Getting the win wasn’t what is important. My No. 1 goal isn’t winning. If winning was the objective, we’d approach every game differently.

“The sole focus is helping every guy on this team become better ball players, and we have some ball players on this team,” he continued. “I think we outhit them, I think we out pitched them. We had a couple missed plays in the field. The Surge played a really good game defensively, and I think that was the difference.”

The Surge finished with a 14-8 edge in hits.

Hiroki led Saranac Lake at the plate, finishing with three hits in five at-bats. He scored twice and knocked in four runs. Left fielder Jesse Russo also had a big day on offense for the Surge, going 4-for-5, and Kyle Robinson finished with two hits, two runs scored and an RBI. Dominguez, Alexander LaFayette, Stephen Octave, Brandon Camargo and Jose Negron added a hit each for the Surge.

Jordan Matos rapped out a pair of hits for New York, and James Dockery batted in two runs on with a double in the Bucks’ first at-bat. Drew DeAngelis and Dale Urquhart Jr. finished with a hit and a RBI each in the loss.

Chikara Igami started on the mound for the Surge and earned the win. He worked five innings, gave up six hits, walked three and stuck out seven Bucks.

Matsuzaka said his Igami got off to a rough start when he gave up three singles, a double and two walks in the top of the first, but pitched well during the rest of his outing.

Alexander Wynacht took over on the mound in the sixth and seventh, and Shoji Muraymana threw the final two innings for Saranac Lake.

Emmanuel Brantley was New York’s starting pitcher and worked into the fourth inning while taking the loss. He allowed six hits and five earned runs.

Good news is that Puerto Rico Islanders players showed up to watch some of Tuesday’s game, so they are in town set to take on the Surge. The Islanders bring a 12-6 record into their series against the Surge, which is scheduled to start with the opener Wednesday beginning at 1 p.m.