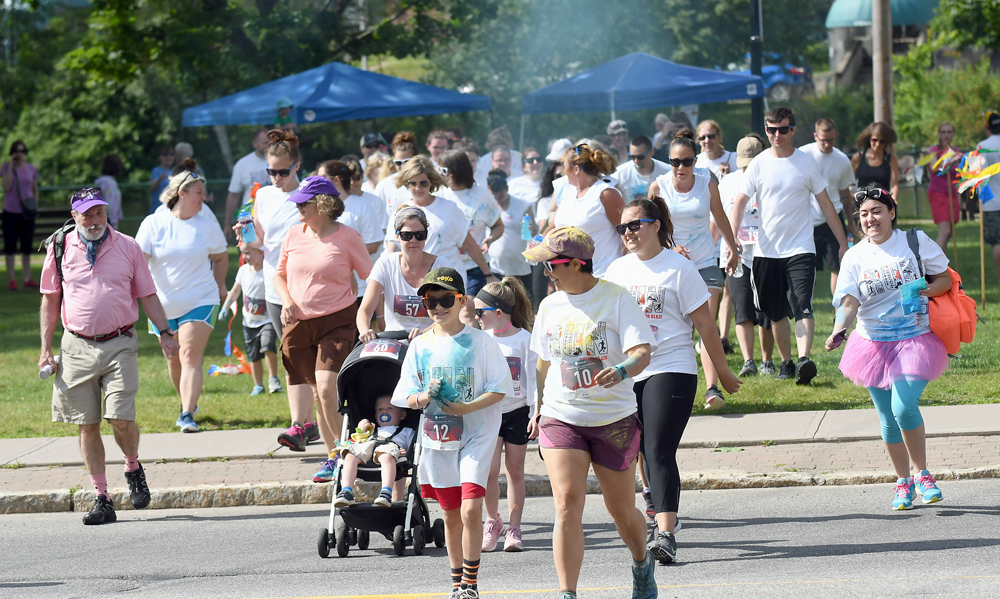 Those were among the hues of the day during the Color Run that was held Sunday to benefit clients at the St. Joseph’s Addiction Treatment and Recovery Center in Saranac Lake.

The inaugural 5k run started and ended at Riverside Park and drew more than 90 runners and walkers of all ages. Participants began the event with white shirts emblazoned with words of inspiration including Courage, Be Brave, Every Step Counts, Peace, Love, Color, Never Quit and Determination, among others. And along the way, runners passed through stations where they were sprayed with colored powders by event volunteers.

Andrea Hudak, who works at St. Joseph’s and organized the Color Run, was thrilled with Sunday’s outcome. She said proceeds from the run will go toward helping St. Joseph’s clients continue their treatment when their funding gets cut off.

“It was a fantastic turnout. I’m so happy for everyone who came out, supported, volunteered,” Hudak said. “It’s great to see all these happy faces coming through the finish line. I think it was a good event. It couldn’t have happened without people coming together as a community. 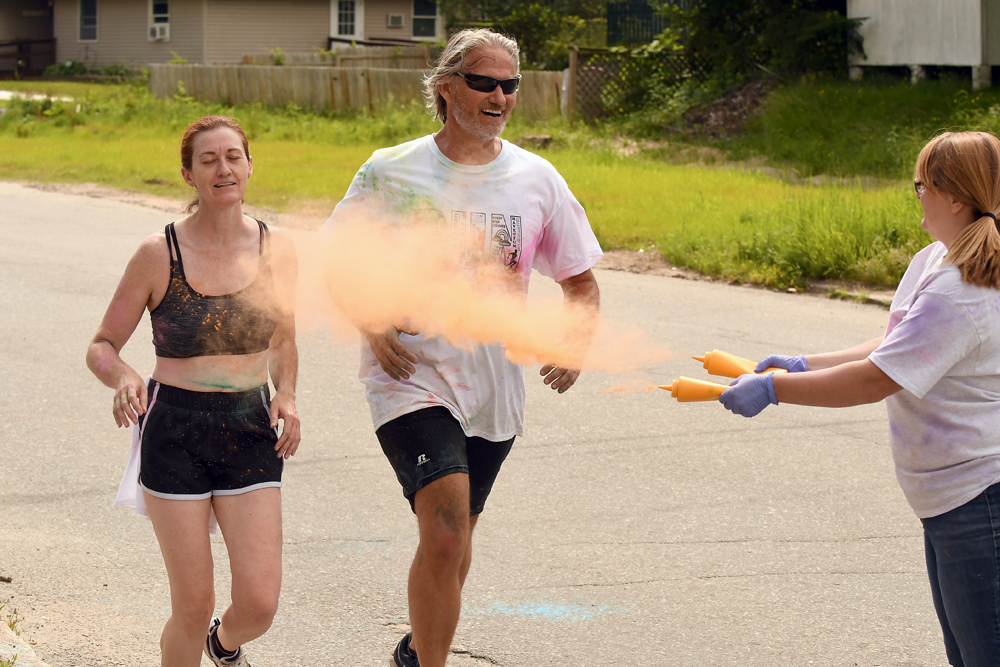 “All of the money is going to go directly to clients for scholarship,” she continued. “There’s nothing worse than seeing someone’s stay cut short because of insurance. It happens more than we would like to see it, so clients who need additional time and any level of care at St. Joseph’s will be eligible for scholarship.”

Some participants Saturday were serious runners, while others showed up to support the cause.

The men’s top three finishers in order were Lance Miller, Kevin Champagne and a client of St. Joseph’s Addiction Treatment and Recovery Center. Heidi Czerepak was the fastest female finisher and was followed by Ally Hart in second place and Kristin Meissner in third.

Saranac Lake’s Remi Joyeuse and his training partner Tania McCabe were among the color run participants. Joyeuse plans to run in this year’s New York City Marathon to raise money for the National Brain Tumor Society. He said Saturday’s run was the third race he has entered this year. McCabe came from her home in Dickinson Center to join him in the run on a beautiful sunny day.

“One of my best friends died of brain cancer 19 and a half years ago and his sister is running the New York Marathon,” Joyeuse said. “She asked ‘Why don’t you run it with me?’ I said get me a bib and I’ll do it. I’ve been in three races this season, but literally, my 16 weeks of training started today. 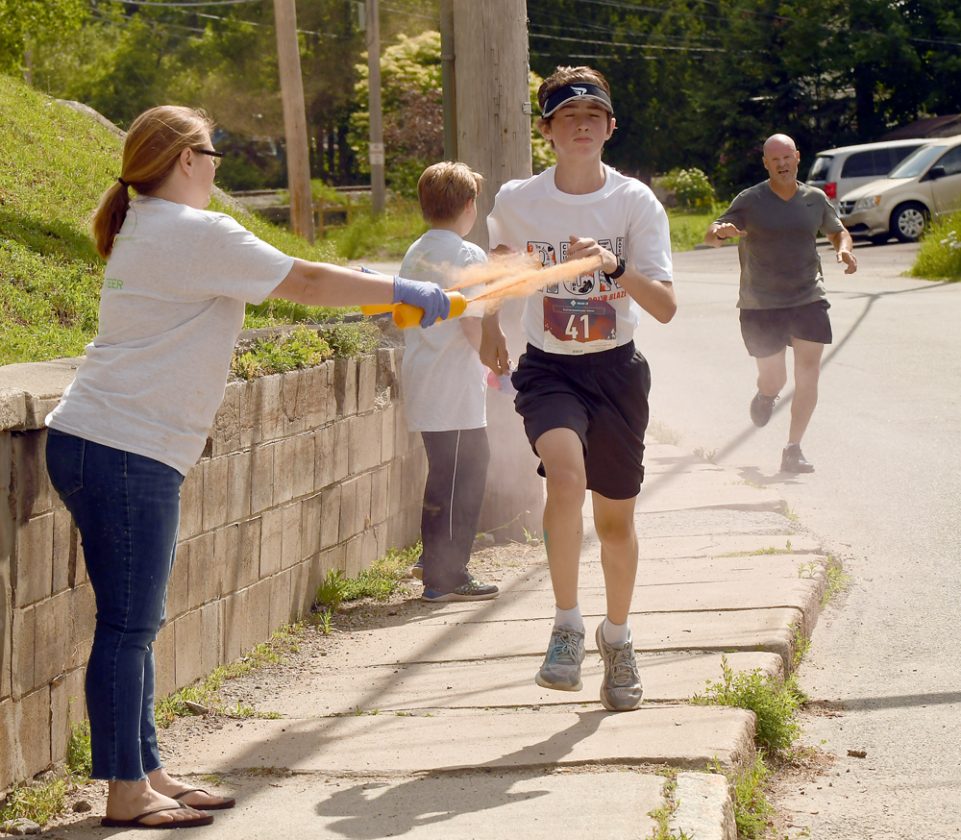 “I’m raising money for that cause and this is another good cause just to kick us off,” Joyeuse continued. “I’m brand new at the running, so I figure the John Wayne approach is the best way to go. You just throw yourself in the deep end and hope for the best. I think for anybody who’s battling anything, it’s just momentary pain for me. It’s not something that’s going to endure forever so it’s “Suck it up cupcake and make it happen.”

Zach Randolph, the directory of the Veterans’ Program at St. Joseph’s also took part in the run Sunday. He was ambushed along the route by his son Legend, who volunteered at a color station and saturated his dad in a cloud of blue.

“I’ve been out of the Army for a while, so I haven’t run very much, but I had to be here for this,” Randolph said. “It’s the first event, I think it was a great turnout and the weather turned out great for it. This is a great outing. Everybody is coming out to support it. We have residents out here enjoying the event, it’s a beautiful thing. This is what recovery should look like. This is really the culmination of what we’re all about. This is good stuff.”

Randolph went on to praise the effort by Hudak in pulling off the color run, which is the newest of the many fundraisers that help clients at St. Joseph’s.

“For her to come up with a brainchild of putting a run like this together and having the money go toward helping people stay in treatment longer, it really speaks to her involvement,” Randolph said. “There are thousands of donations that come in for families, for people going through treatment. We have the veterans program, which sees a ton of support from the community. It’s all an outpouring of love, and this is part of it.” 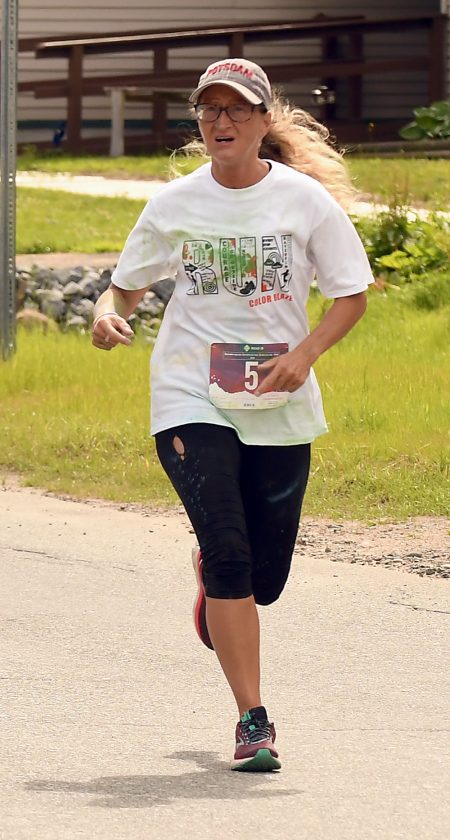 Heidi Czerepak makes her way through the course on the way to winning the women’s title in Sunday’s Color Run. (Enterprise photo — Lou Reuter)