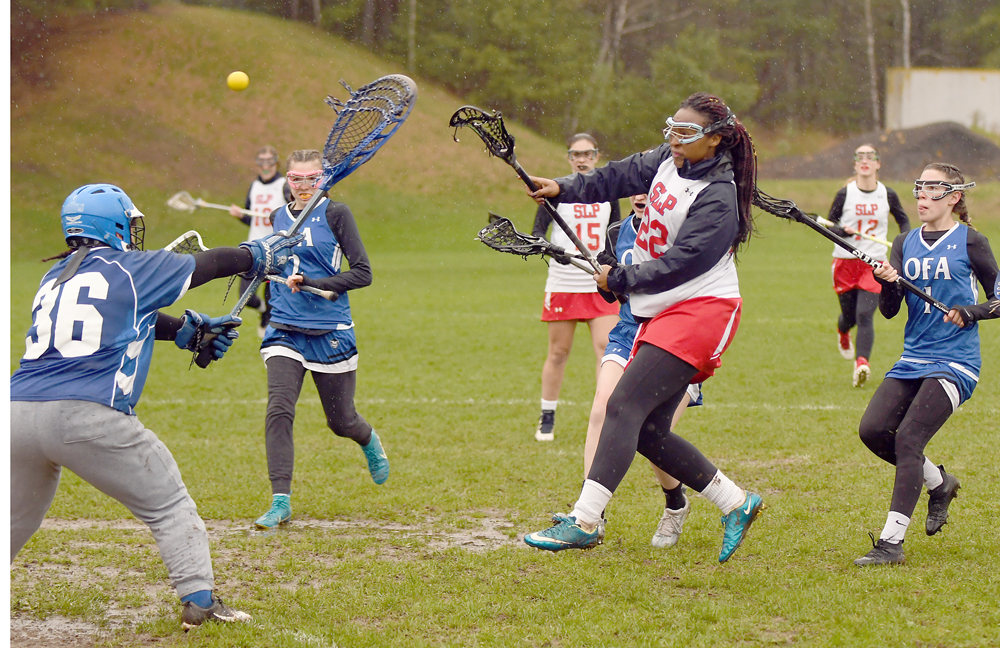 Mistre Newton buries a shot for Saranac Lake Placid during the first half of Monday’s game against Ogdensburg at North Country Community College in Saranac Lake. (Enterprise photo — Lou Reuter)

And despite competing on a cold, soggy day, SLP’s six seniors and the rest of their teammates had an evening to remember while claiming a 13-2 victory over visiting Ogdensburg on the North Country Community College field.

On paper, a win was almost assured for the hosts as they faced a struggling Blue Devils opponent with an 0-11 record. So instead, SLP’s objective was to have every senior on the team score a goal, get the rest of the lineup plenty of playing time and, in the process, chalk up a victory on home turf.

SLP came through on all fronts, although the deal was never sealed until 30 seconds remained in the match, when senior netminder Erica Swirsky netted the first goal of her high school career.

It was apparent early on that SLP wasn’t going to be threatened. With seniors scoring early and often, SLP raced out to an 8-0 lead before the midpoint of the opening half, and then carried a 10-1 edge into intermission. 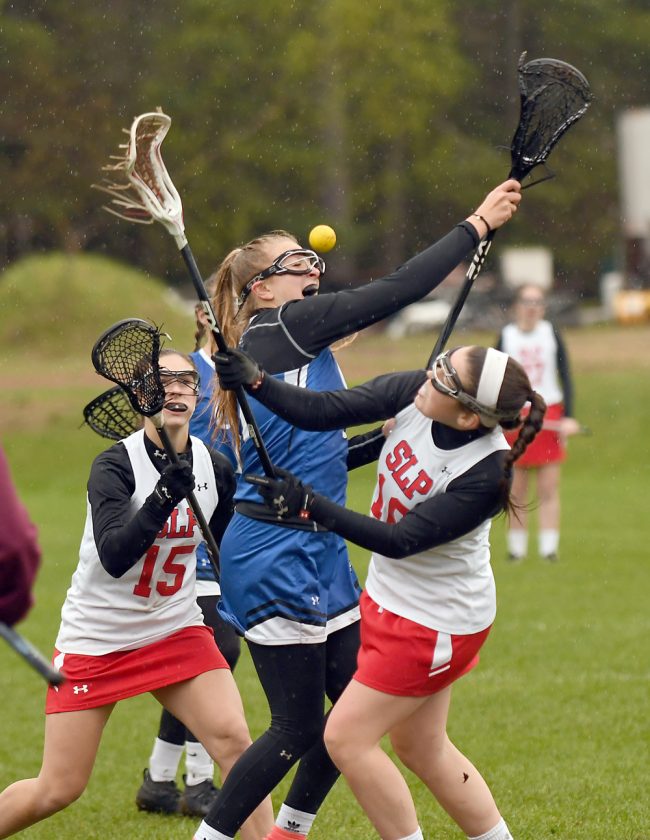 “The weather wasn’t looking very nice for our senior game, but it was fun,” SLP head coach Shannon Bromley said. “All the seniors got their goals, we got everybody in and we came out with a good win.

“We wanted to have the seniors who are ending their careers this season playing close together on the field,” Bromley continued. “We had them attack and midfield, and the rest of the girls filled in on defense. They all did pretty well.”

In addition to Swirsky, seniors scoring goals for SLP were Ryley Fischer, Mistre Newton, Julia Chapin, Meghan Byrne and Kylee Clark. Fischer, a senior co-captain, led the way with three goals. Newton and Clark both finished with two goals and an assist, and Byrne and Chapin buried a goal each.

Three young guns — all seventh-graders — also added a goal each in the win, with Olivia Ferebee and Kaitlyn Yando finding the back of the net and Phoebe Peer scoring her first varsity lacrosse goal.

Bromley said much of the drama in the second half centered around getting Swirsky her first high school lacrosse goal. The veteran, who has been with the team since eighth grade, played in net during the first half, and was then replaced by one of the team’s top goal-getters, Lydia Bullock. 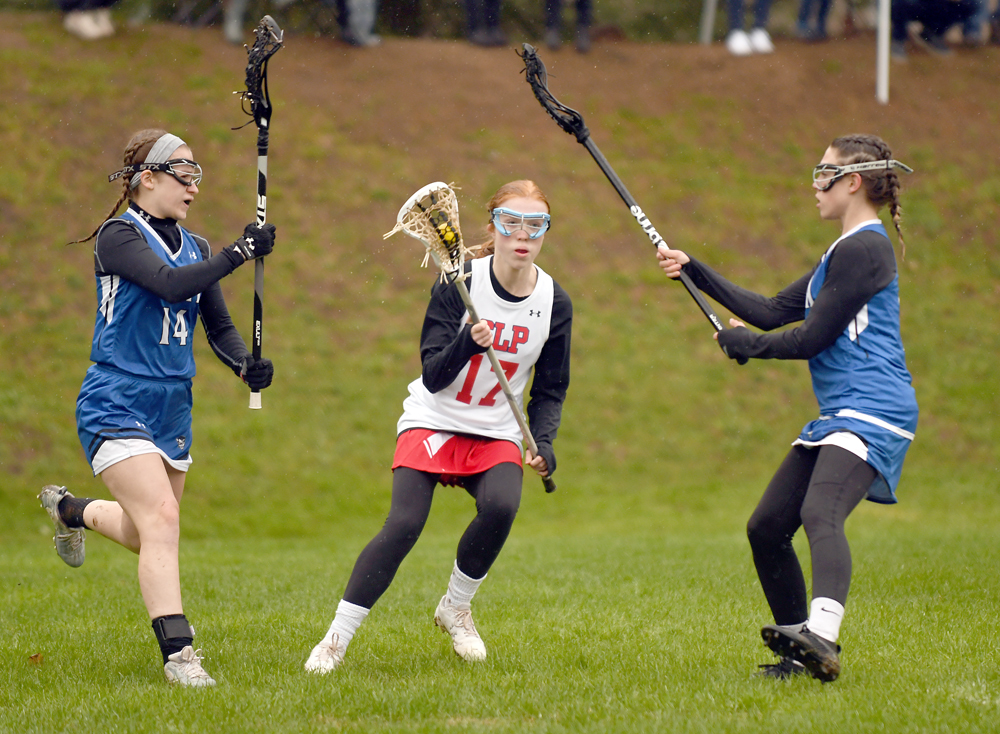 Robyn Rutgers of SLP splits the Blue Devils’ defense while on the attack during the first half of Monday’s match. (Enterprise photo — Lou Reuter)

With teammates feeding her the ball, Swirsky came up empty on a number of attempts, and finally connected with the game’s last goal with 30 seconds left on the clock.

“In the second half, we were really focused on getting Erica that goal,” Bromley said. “We had her up on attack, she got a lot of shots and she was determined. It was a nice moment.”

With the win, SLP ended a two-game losing slide, one which saw the team score a combined 29 times in the contests but still come up empty.

SLP wraps up the regular season this week with three matches on the road, starting Tuesday at Potsdam. SLP will then face Canton on Thursday and travel to Heuvelton Friday.

Although Monday marked SLP’s final outing at home in the regular-season, hosting a playoff match is still not out of the question, depending on how the remainder of the schedule plays out. At this point, coach Bromley said a number of teams in the league, including SLP, can knock off another opponent on any given day. 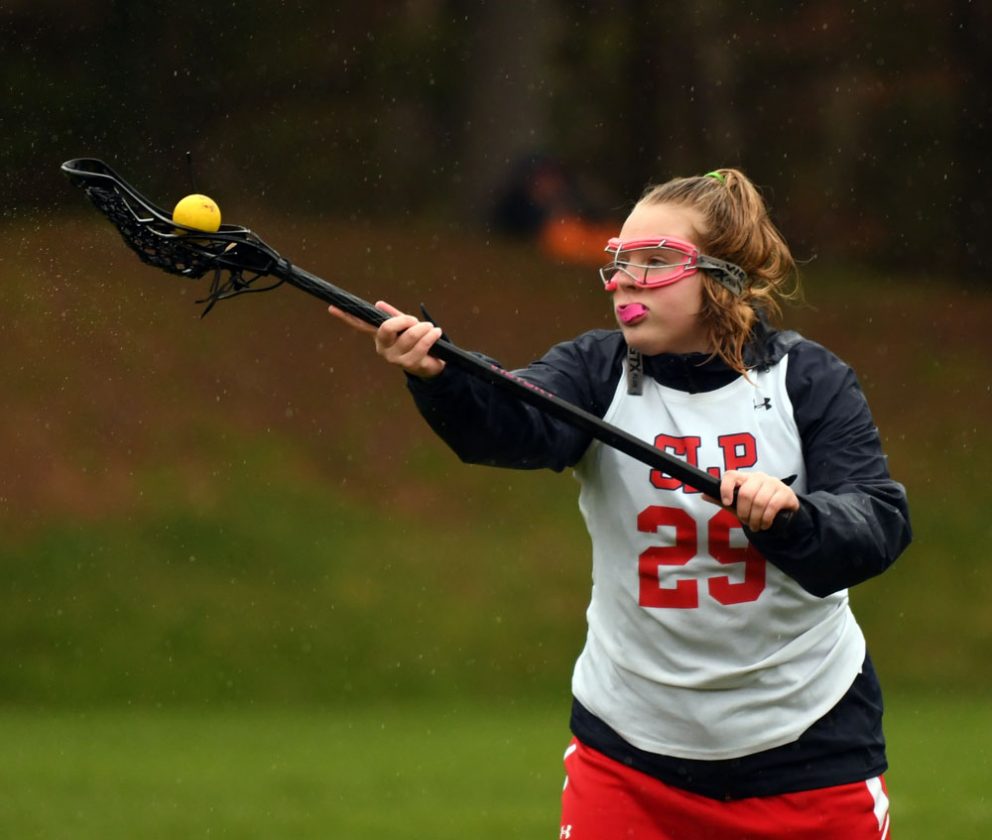 “Before today, we scored 29 goals against two good teams and still didn’t win,” Bromley said. “Strategically, I think we are where we need to be. It’s just a matter of keeping it clean; catching the ball, picking up ground balls, working hard. When we do that, I think we can compete with anybody.”