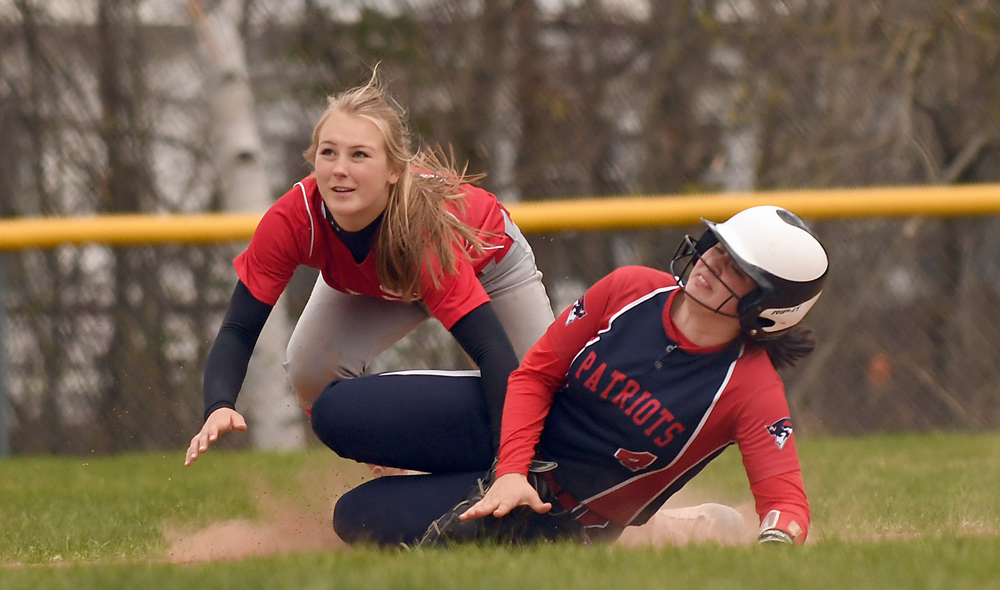 Saranac Lake shortstop Annabelle Bombard-Schmidt tags out AuSable Valley’s Emma Prentiss to get her team out of the top of the sixth inning after the Patriots catcher attempted to stretch a single into a double. (Enterprise photo — Lou Reuter)

The Red Storm racked up 10 hits, including three doubles, and had just two errors in the field on the way to chalking up their third win of the season and ending a five-game losing slide.

Katie Gay pitched a complete game for the winners. The junior gave up four hits, struck out six Patriots and only walked two batters.

Megan O’Brien had a big day at the plate for Saranac Lake, going 3-for-4 with a pair of singles and a double. Amya Hurteau belted a double and a single in the win, Caylen Skiff singled twice, Marissa Gibbs doubled, and Maddi Reardon and Annabelle Bombard-Schmidt added a single each for the Red Storm, who improved to 3-6 in the CVAC. 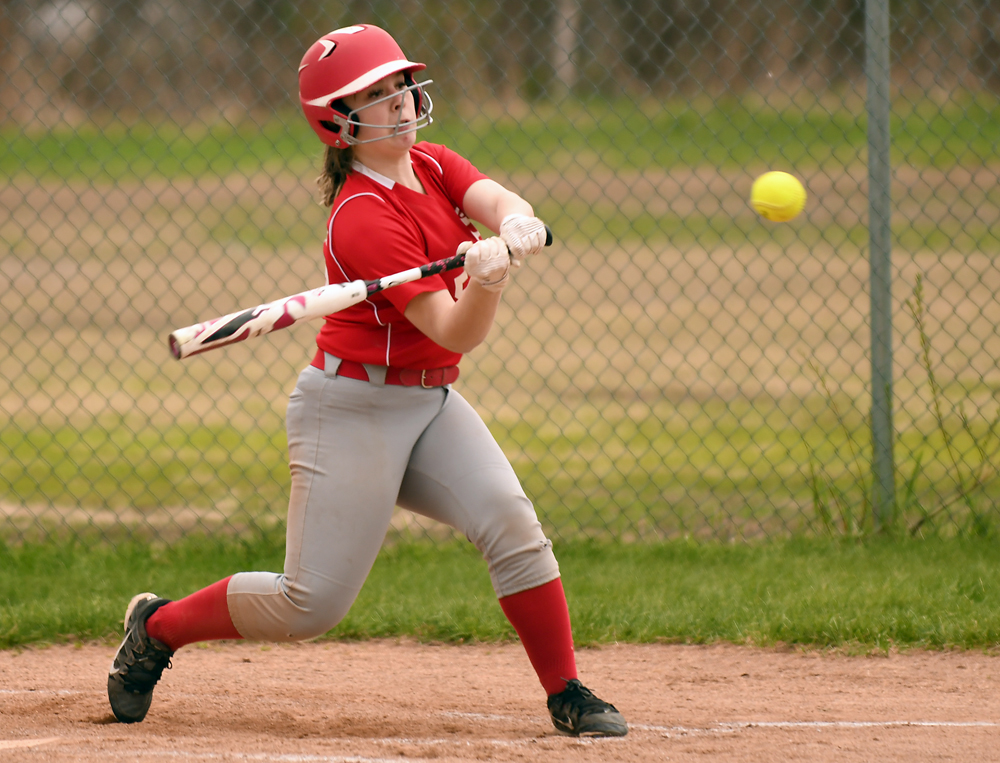 Amya Hurteau rips into a pitch during Thursday’s game against AuSable Valley. The sophomore finished with a double and a single in the Red Storm’s 11-5 victory. (Enterprise photo — Lou Reuter)

The Patriots tacked on four more runs in the top of the sixth, but were then shut down in their final at-bat as three straight batters were thrown out at second on infield grounders to end the game.

“A long time coming. It’s been a while since we’ve won,” Red Storm coach Suzanne Nicholas said. “We’ve had a lot of games with four-, five-, six-run margins where we’ve given up too many runs on some errors in the field. We made some changes tonight. We implemented DP and flex, which we haven’t done this season. Once we really saw where our players strengths arose, we played to those strengths and made some changes in the field and in the batting order.

“We had some strong bats today, but they (the Patriots) made some great catches too,” Nicholas added. “We were really hoping a few more dropped in there.”

Saranac Lake was successful down AuSable Valley throughout the game, and especially in the first three innings, as a total of just 12 batters stepped up to the plate with no avail. Meanwhile, the Red Storm started putting the bat on the ball beginning in the second inning, when they converted a lead-off double by Hurteau and a walk to Skiff into a pair of runs that were batted home on a single by O’Brien.

Saranac Lake then sent 13 batters to the plate in the third inning and took advantage of five hits and five walks to score seven runs. The Red Storm then saw seven batters step into the box in the bottom of the fourth and scored two more times after lashing a single and a double in the inning.

Holding their 11-5 lead, the Red Storm went down one-two-three in their last two at-bats, but went down swinging as five of those outs came on fly balls caught by the Patriots defense.

Madison Campbell went the distance in the pitcher’s circle for AuSable Valley and struck out five while taking the loss.

Three of AuSable Valley’s hits came from the top of its order, as Reanna Prentiss doubled and Abby Sawyer and Sophie Rennie each singled. Emma Crowningshield collected the Patriots fourth hit with a single.

“We didn’t help ourselves defensively with a couple of miscues,” said AuSable Valley head coach, whose team defeated Saranac Lake 13-10 the first time they met this season. “They came and they took it to us. We started to make a comeback, but it was too little, too late. This was our fourth game of the week. I had a couple girls out of position, I had to bring up a couple of JV kids, so a good experience for them. We’ll get better.”

The Patriots fell to 3-6 with the loss, which was their fourth straight setback.

Saranac Lake next plays on the road Monday at Moriah. The Red Storm have two home games slated for next week as they host Beekmantown on Tuesday and Lake Placid on Thursday.