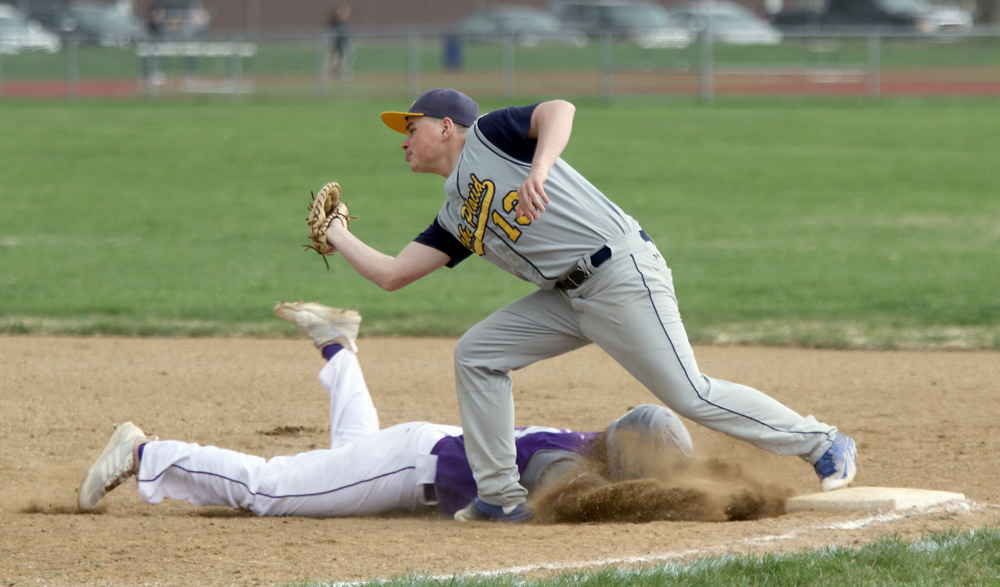 CLINTONVILLE — Heading into this week of high school baseball action, Saranac Lake still hadn’t tasted victory. So far, it’s turned out to be a pretty good week for the Red Storm.

On Thursday, Saranac Lake won for the second time in four days, topping AuSable Valley 9-2 for its second road victory of the week.

The Red Storm got a stellar performance at the plate from senior catcher Jaden Gladd, who went 4-for-4 with a double and an RBI. Saranac Lake finished the game with 10 hits. Ben Munn had a 2-for-4 outing with a double and knocked in three runs, David Warner had a pair of hits and an RBI and Dylan Stewart batted in one run in the victory.

Carter Sturgeon also had a great day on the mound for Saranac Lake. Just a freshman, Sturgeon pitched a complete-game victory while allowing just three hits and fanning seven batters.

Saranac Lake is next scheduled to play at home today, hosting Saranac Central starting at 4:30 p.m.

LAKE PLACID — Lake Placid’s three-game win streak has come to an end, thanks to the Ticonderoga Sentinels.

On Thursday, Ticonderoga scored four runs in its first at bat and never looked back in a 7-2 victory over the Blue Bombers in Champlain Valley Athletic Conference action.

Trailing 4-0, Lake Placid responded with a pair of runs in the bottom of the first but were unable to tack any more on the rest of the way.

Lake Placid managed to get just one hit in the game on a Matt Brandes single.

Terrence Benedict worked six innings on the mound to earn the win for the Sentinels, who were coming off their only loss of the season, a 17-14 setback on Wednesday against Beekmantown. Russ Gallo came in to pitch the bottom of the seventh for Ticonderoga and stuck out the Blue Bombers in order.

The Blue Bombers, who are now 5-5, are scheduled to play at home again today against Beekmantown starting at 4:30 p.m.

Ticonderoga capitalized on a 15-hit offensive effort and nine Lake Placid errors to secure the victory.

RAY BROOK — The Saranac Lake golf team dropped its second match in as many days and third of the week, falling 4-2 at home Thursday to Beekmantown.

Playing at the Saranac Lake Golf Club, the Red Storm got wins from its two youngest competitors, as seventh-grader Noah Jewtraw and eighth-grader Evan Hochwald defeated their opponents.

The Eagles’ top player, Hugo Chavanchakij, took medalist honors with a 39-46 win over Zach Churco, who shot the lowest round of the day for Saranac Lake.

Dalton Kane fired a 40 for Beekmantown to defeat Will McClure in the second pairing.

The Eagles picked up their other two points in contests decided by a single stroke. In the third match, Beekmantown’s Riley Loughan edged Red Storm freshman Carson Ryan 50-51, and in the sixth match, Camden Brayton slipped past Saranac Lake freshman Ryan Gallagher 58-59.

Jewtraw won in the fourth position, defeating Ben Welch 52-60, while Hochwald triumphed in the fifth spot with a 55-65 victory over Hunter Gelwicks.

Saranac Lake is next scheduled to compete Monday at Ticonderoga.