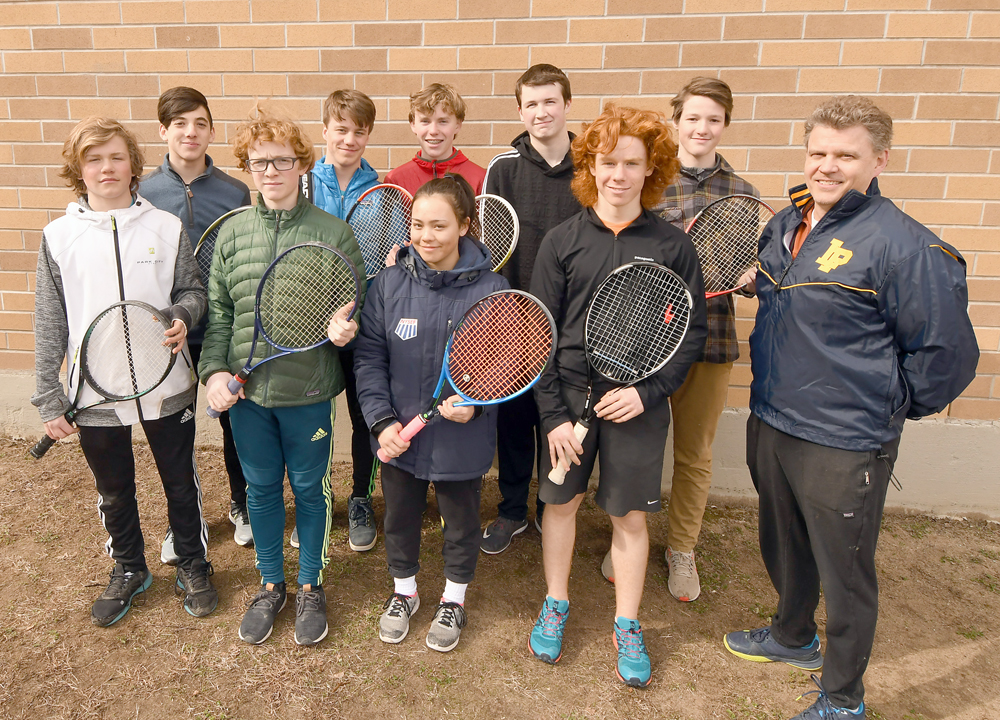 LAKE PLACID — Heading into a new high school sports season, teams often return some experienced players from the year before and also have a mix of newcomers.

That’s the case for the Lake Placid boys tennis team as it enters its Champlain Valley Athletic Conference schedule this year, but the Blue Bombers are bringing something else into the season that they haven’t had in a while. This spring, the boys squad has numbers.

A year ago, the Blue Bombers had just enough players, seven to be exact, to fill out its three singles and two doubles positions for competitive matches. This time around, Lake Placid has a dozen players on the roster, and that’s a number that head coach Tyler Chase is happy to have.

“I’m in the good position this year of having a lot to draw from,” Chase said. “Usually, we’re scrambling to fill the team out. I’ve got options.”

This spring marks the first time Chase will coach the team without his son Sawyer in the lineup after he graduated a year ago competing as the Blue Bombers’ top singles player. That said, there’s still plenty of experience returning to lead the team onto the court, as Sonja Toishi, Camden Riley and Tucker Jakobe are back and expected to fill out Lake Placid’s three singles positions.

After playing on the girls team as a seventh-grader and rolling through the Section VII competition two years ago, Toishi joined the boys team in 2018 and will fill Sawyer Chase’s position at No. 1 singles this spring. Coach Chase said for Toishi, last season was all about getting up to speed with the boys’ style of play and described the talented tennis player as a fast learner. He added that one reason Toishi moved over to the boys side was she wanted to have the chance to compete in the state championships, something which Section VII’s girls aren’t able to do because they play a spring schedule.

“In the girls game, it’s a lot more hitting the ball back and forth from the baseline,” Chase said. “Sonja needed to learn how to play against the boys. There’s a lot more north-south movement on the court, a lot more moving up to the net. She picked up a lot of that last season, and I think she’ll do just fine this year.”

Camden Reiley has been with Lake Placid since seventh grade, and the junior from Saranac Lake will step into No. 2 singles this spring as a junior. Sophomore Tucker Jakobe, who also joined the team in seventh-grade, fills out the Blue Bombers singles positions at No. 3.

“I think the rackets were bigger than both of those guys when they first started,” quipped Chase.

A goal for the rest of Lake Placid’s young roster will be to gain experience, as a host of players are taking up competitive tennis for the first time. Coach Chase said he expects returning freshmen Levi Groves and Tristian Spotts and newcomers Reuben Bernstein and Simon Thill to be on the court as doubles teams to start off the year, but a lot also depends on how quickly other members of the team develop their skills.

“Those are the guys I think I’m starting with, but I don’t know what my ladder will look like at the end of the first week,” Chase said. “The theme this year is we have a lot of newcomers. I have kids who have certainly never played competitive tennis, and once they start learning the game, how the scoring goes, once they start winning a few games and getting some momentum going, I think things will fall into place.