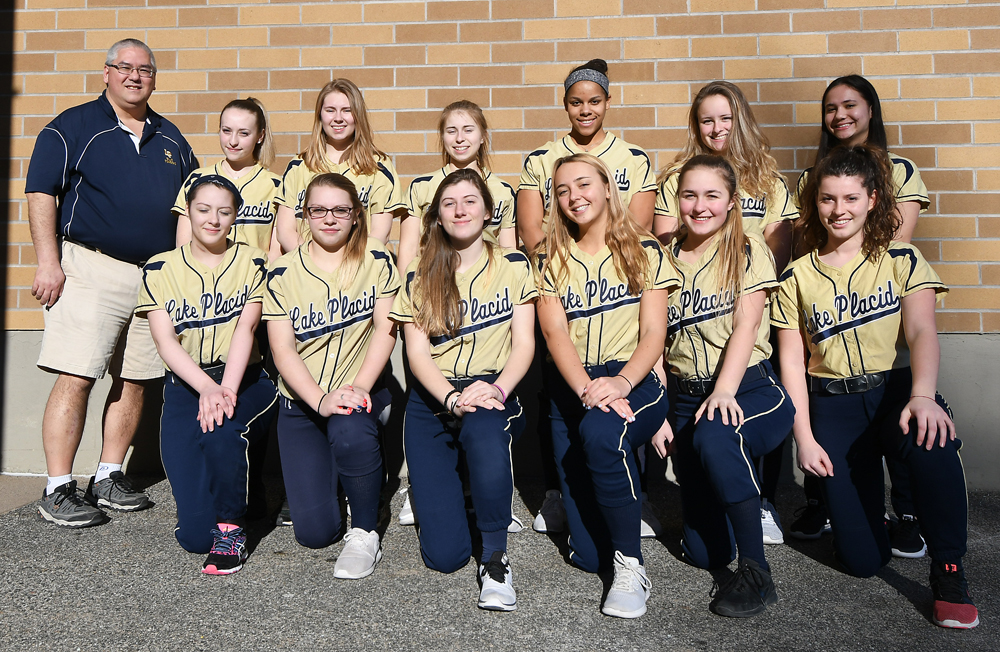 Greg Hayes has taken over the reins from longtime head coach Donna Moody, who retired at the end of the last school year. He’s inheriting a program that finds a varsity squad that will be stepping on the field without a lot of experience, but there’s little doubt Hayes has the passion and ability to bring out the best in his lineup.

Just three players are back from the 2018 varsity squad. Seniors Makeda Thompson and Carsin Rissberger are the only returning starters and will serve as the Blue Bombers’ captains, while senior Trinity Baillargeon is the third veteran back. The rest of Lake Placid’s roster features girls who have moved up from the junior varsity and modified ranks, and players who stepped away from the game and have returned after competing in modified softball.

Despite the young group, Hayes, who has coached softball at all different levels, has high hopes for his new group of student-athletes.

“We’re going to have a young, inexperienced team but I think the talent is there,” Hayes said. “We have good athletes. I think it’s just a matter of grooming them into good ball players.”

Thompson has spent the most time among the Blue Bombers on varsity and is a utility player in her third season with the team. Rissberger played the infield as a junior and is expected to take over at shortstop this spring.

Hayes anticipates sophomore Grace Crawford to be the team’s pitching ace after a strong showing in the circle as a freshman on junior varsity. Two other players who should make an impact are junior Shannon Bentley and sophomore Natalie Tavares, who both have experience working behind the plate.

A healthy Eliza Barney is a new varsity team member who played modified softball at Lake Placid but has been plagued by injuries since that time. Danaya Patterson is a freshman who Hayes thinks can be a difference-maker for the Blue Bombers.

In what has become a common scenario for just about every season in recent years, Lake Placid’s softball team has been very limited in practice time outdoors prior to kicking off its schedule. Hayes said with such a young squad, getting up to speed at a new level as quickly as possible is going to be one of the Blue Bombers’ biggest challenges.

“One thing I do have this year is a lot of team speed, almost top to bottom,” Hayes said. “Hitting-wise, we’re going to need the first half of the season to get up to the speed of varsity-style pitching.”

Not only is Hayes hoping for big things from this year’s varsity squad, he’s also looking toward the future where the goals may be even loftier.

“I want to try to build the program from the youth level on up,” Hayes said. “I know I play a lot more small ball than Donna used to. I like to be aggressive on the bases and stuff like that. My goal every year is going to be to get to the state championships. We’ve never done that.

“We’ve gotten as far as regionals, but we’re going to have goals along the way. Last goal of the year would be state championships. Obviously, make regionals before that and sectionals before that. We want to be sectional champs. I think we need to strive for that. If you don’t, you won’t get there.”

Hayes said in order to make that happen, the girls can’t be afraid to make mistakes.

“It’s part of the game,” he said. “I want to challenge the girls to step out of their comfort zone and see how far we can go. I think they’re starting to buy into it. I’m trying to get them into the mindset if we work as hard as we can in practice, push themselves as hard as they can, when it comes to the game, it will be so much easier. Even as young and inexperienced as we are, I think we can do some damage this year.”

Lake Placid will compete as a Class C team along with Saranac Lake, Northern Adirondack, Ticonderoga, AuSable Valley and Moriah.