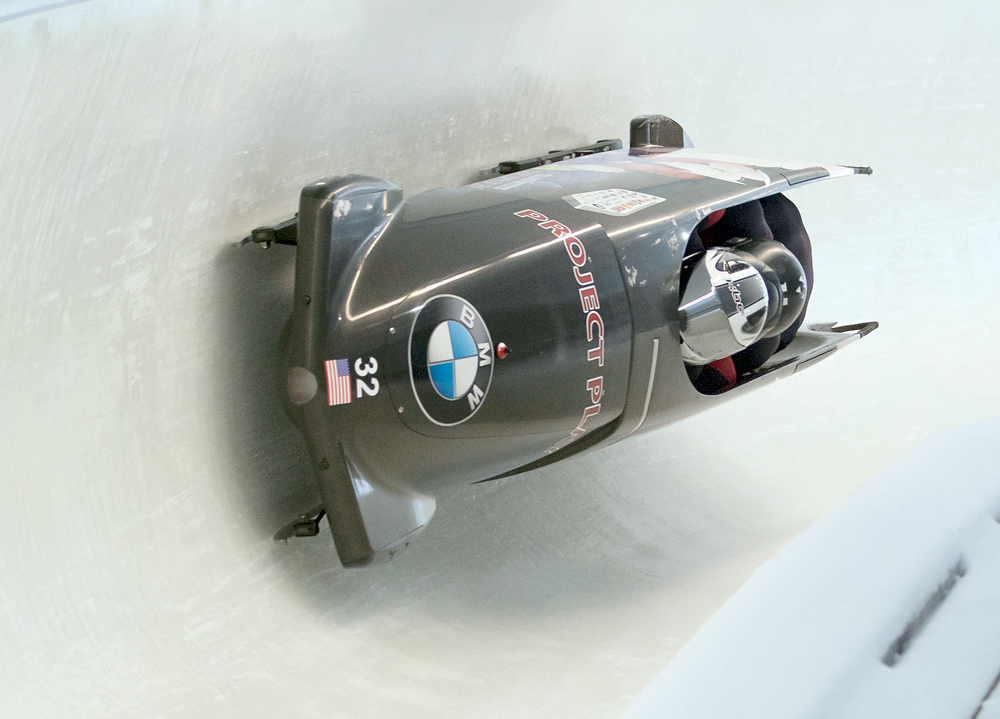 Codie Bascue, of Whitehall, finished second Saturday, but combined with his two-man bobsled victory, Bascue was crowned the overall champion to earn a spot on the 2019-2020 World Cup team. Bascue’s push athletes Josh Williamson, Frank Del Duca and Jimmy Reed have also earned a spot on next season’s team.

“We saw some really great racing (Friday and Saturday),” USA Bobsled Head Coach Mike Kohn said. “We’re excited about the new format of nationals. It will allow Codie and his team the opportunity to work together during the offseason, which will only strengthen this team moving forward. It was also great to host our first monobob race, and we’re looking forward to seeing the discipline progress.”

Church, Allison, Kinney and Wilcox matched Bascue, Williamson, Del Duca and Williamson for the fastest start time of 5.21 seconds. Church, of Cadyville, pulled away from Bascue with a downtime of 54.80 seconds to give his team a narrow lead of 0.06 seconds.

Church, Allison, Kinney and Wilcox lost time against their competition at the start in run two with push time of 5.22 seconds, but Church made up time en route to the finish. The crew crossed the finish in 54.92 seconds for a combined time of 1:49.72 to secure the four-man title in 0.19 seconds. 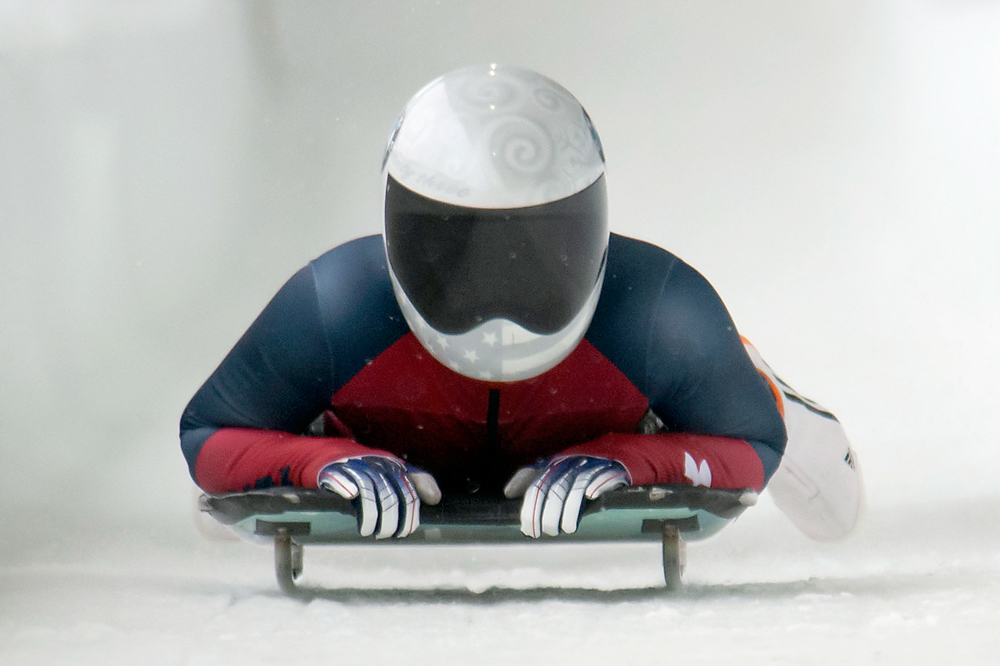 Bascue, Williamson, Del Duca and Reed had the fastest start time of 5.19 seconds and clocked a final downtime of 55.05. Their combined time of 1:49.91 earned the crew the silver medal.

Geoff Gadbois, Blaine McConnell, Adrian Adams and Kris Horn posted a start time of 5.30 seconds for a run of 54.98 seconds in the first heat. They followed it up with a push of 5.24 and downtime of 55.00 seconds for a combined time of 1:49.98 to take the bronze.

Monobob will make its Olympic debut in Beijing 2022 as a women’s only event. In the first-ever monobob race in Lake Placid, Nicole Vogt won the first ever monobob competition held in Lake Placid. Vogt took the lead in the first run with a time of 1:04.24, followed by Brittany Reinbolt with a 1:04.67. Reinbolt had an advantage of a 6.29-second start time compared to Vogt’s 6.63.

The women’s and men’s USA Skeleton National Championship titles were contested down to the fourth and final run Saturday at Mount Van Hoevenberg. Kendall Wesenberg threw down two impressive runs to overtake the lead, winning her first career title.

Austin Florian, of Southington, Connecticut, fell back after a mishap at the start in Saturday’s opening heat, but he rallied back in the finale to claim his first championship win. Their wins earned them spots on the 2019-2020 World Cup team.

“It’s my first national title, so that’s cool,” Wesenberg said. “The World Cup team has slid 15 race runs in the last 30 days, so to come here and put up a fight the way everyone has is impressive. Savannah (Graybill) and I have been back and forth all week, all the way until today.”

Graybill maintained a slim lead of 0.07 seconds over the women’s field after the third heat. She posted a start time of 5.63 seconds for a run of 55.88, finishing just ahead of Wesenberg. Wesenberg was third overnight, but she clocked the fastest run of the heat, 55.71 seconds, to move up into second. With a slim margin between Graybill and Wesenberg, the race for the title would come down to the fourth and final heat.

“Sorry for that one,” Wesenberg said jokingly to Graybill. “Sorry I did it the way I did in the last run.”

“Thank you,” Graybill said. “It’s either stress now or stress in October, and she just gets no stress this summer.”

Graybill finished with a four-run combined time of 3:44.03 for second place.

Katie Uhlaender, of Breckenridge, Colorado, returned to competition Friday after a year off. She started her campaign for a spot on the team with the third best time of the opening heat, and moved into second place to enter Saturday’s final heats in the running for gold. She fell back 0.17 seconds behind Wesenberg, and 0.24 seconds behind Graybill. The four-time Olympian finished third with a total time of 3:44.42 after a final downtime of 56.23 seconds.

Megan Henry was close to the medals in fourth with a combined time of 3:44.88.

Florian held a comfortable lead of 0.28 seconds over the men’s field heading into Saturday’s final heats, but Kyle Brown stepped up in Saturday’s opening heat to take over the lead. Brown laid down a start time of 5.01 seconds for a downtime of 54.18 seconds to make a run for the title. Brown has medaled in three national championships before, but he’s never won. He claimed bronze in 2018, and silver in 2016 and 2015.

Florian tripped at the start, resulting in a start time of 5.09 seconds, which is more than three-tenths of a second slower than his times Friday. He managed to post a downtime of 54.66 seconds to keep him within reach of the lead.

“I’d rather not do that, but it makes for a good race,” Florian said. “I was certainly not happy about slipping, but sometimes it happens. I managed to put it behind me and had a very good run. I knew if I could put together a better push and have anotner run like that, I could get closer to the lead or take it back.”

As Florian approached the starting line, a crowd of family and friends was trackside to cheer him on. Florian came back in the final run with an outstanding push time of 4.80 seconds for a run of 54.01 seconds to reclaim the lead. He clocked a four-run combined time of 3:37.82 to win by 0.20 seconds.

“It definitely helps to have people at the race and to have so much support,” Florian said.  “It was so loud at the start, I love not being to hear the announcer because of the noise.”

Florian is already thinking ahead to the offseason. He’s looking at job opportunities in Connecticut, and will spend some time with his athletic trainer and strength coach.

“But first I need some time off,” Florian said. “I need a vacation before I get back into it.”

Brown earned his fourth career medal, another silver, with a total time of 3:39.98. Alex Ivanov maintained his position to claim the bronze medal in 3:39.98. Ivanov did not compete this season, but he’s a threat for next season’s national team.

Greg West was the next closest finisher in fourth with a total time of 3:40.09.

Reinbolt and Gibbs have not only earned the naming rights as national champions, but have also earned their spots on the 2019-2020 World Cup team. Bascue and Williamson will compete in the four-man race tomorrow with hopes of securing the combined title in points for their spot on the team.

“To come in and have a berth onto the national team at stake is pretty stressful,” Bascue said. “We’re trying to get as much out of our bodies and our minds as we can this week after a pretty difficult season.”

Bascue and Williamson were the fastest competitors off the start block Friday with push times of 5.26 and 5.25 seconds. Bascue was scheduled to race with Hakeem Abdul-Saboor, but a lingering injury didn’t feel right for Abdul-Saboor while he was warming up and he was replaced last minute with Williamson. Bascue piloted the crew to the finish in 56.64 seconds for the second fastest time of the first heat, and he was able to move into first with a run of 56.93 seconds, fastest time of the second heat. Bascue and Williamson finished 0.23 seconds ahead of the field to claim the two-man title with a total time of 1:53.57.

“It threw us off,” Bascue said. “Josh only have five minutes to warm up, so we didn’t have the push that we wanted and my first drive wasn’t as good as I wanted. Going into the second run I knew we could drop the start and I could drive better. I laid down one of my best runs here of the year, which felt good.”

Geoff Gadbois and Kris Horn finished second with a combined time of 1:53.80. Gadbois and Horn posted impressive starts of 5.28 and 5.32 seconds for runs of 53.70 and 54.18 seconds, respectively. The team was in the lead after the first heat, but they crashed in run two. They were granted a rerun, and Gabdois and Horn raced to the finish with the second best time to secure second place.

In the women’s field, Nicole Vogt (Dallas, Texas) and Nicole Brungardt (Norfolk, Neb.) led by 0.07 seconds after the first heat. The duo pushed off in 5.73 seconds for a downtime of 57.87. Reinbolt and Gibbs were powerful off the start with a push time of 5.67 seconds, but Reinbolt lost the lead down the track. The pair was in second place with a finish time of 57.94 seconds, but rallied back in the finale.

Vogt and Brungardt pushed off  in 5.79 seconds for a run of 58.42, but it was no match for the second run by Reinbolt and Gibbs. Reinbolt and Gibbs were again fastest off the block with a push time of 5.70 seconds, and Reinbolt maintained the lead to the finish with a 58.27 downtime. Reinbolt and Gibbs secured the women’s bobsled title with a combined time of 1:56.21, and the pair has been officially named to the 2019-2020 World Cup team as a result.