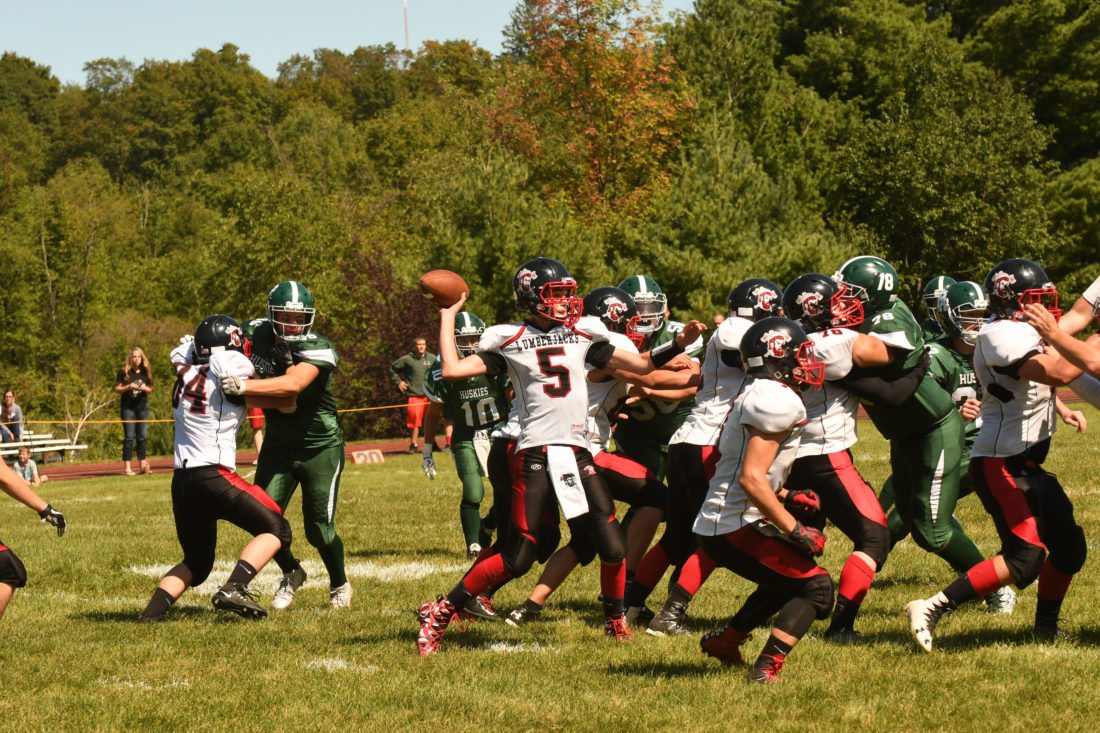 Junior quarterback Noah Cordes, pictured in action at Malone on the first weekend of the season, leads Tupper Lake into an 8-man game tonight in the town of Turin. (Enterprise photo — Lou Reuter)

TUPPER LAKE — After having to give up competing in a game for the second time this season due to a lack of healthy players, Tupper Lake’s football team will be back on the field tonight to face an opponent when it travels to the town of Turin to face South Lewis High School.

But the game the Lumberjacks are playing is going to be a bit different as the teams will battle it out in eight-man football.

A week ago, Tupper Lake was unable to play its regularly scheduled matchup against Massena after injuries piled up on the ‘Jacks again during their final Section X game against Ogdensburg that took place on Oct. 13. With a playoff contest looming next weekend, Tupper Lake head coach Dennis Klossner and his Lumberjacks wanted to get a game in, the South Lewis Falcons of Section III had an open date tonight, and that ultimately opened the door for the Lumberjacks.

South Lewis competes in an eight-man football league with other small Class D schools. Being able to play games that don’t require large rosters is one solution for programs that have dealt, or are currently dealing, with low participation.

The game has the same four, 12-minute quarters as 11-man high school football, and the rules are the same, with the major exception being each team has eight players on the field. With the difficulties the Lumberjacks have had maintaining a large enough roster each week over the past few seasons, especially this year, eight-man football could be the key to survival of the sport at the school

“We began looking into eight-man football over the summer, and I think that it could very well be our future,” Klossner said. “In my eyes, that’s what we are eventually going to be doing. Next year is a possibility.

“There are a lot of schools across the state having trouble with numbers,” Klossner continued. “We’re always on that bubble, but we don’t want to give up football at Tupper. We want to keep football alive, and it’s worth looking into. This is going to be good for Tupper football.”

Klossner said the Lumberjacks have been preparing for the eight-man game this week in practice, and said they should have about 18 dressed and ready to go tonight, including three freshmen who moved up from the modified team. Currently there is no junior varsity program at the school, which has added to Tupper Lake’s woes of fielding a squad that’s ready to be competitive at the varsity level.

In eight-man football, a minimum of five players have to be positioned on the line of scrimmage on offense instead of the usual seven required in 11-man.

Tonight, Tupper Lake’s three starting down linemen are Kyler teRiele, Jaden LaValley and Brayden McCottery, with Ben Mclear and Ryan Picerno lining up as receivers. Noah Cordes will start at quarterback and be joined in the backfield by Skyler Pickering and Brennen McComber.

The Falcons currently are 2-3 against eight-man opponents. A week ago, they fell to Oriskany 38-16, and Klossner was at the game. South Lewis was originally scheduled to play Seton Catholic of Binghamton this weekend, but that team dropped out of competition and Tupper Lake was available.

Next weekend, the Lumberjacks will return to regular 11-man football when they take on the Section VII, Class D champion, which will be the winner of tonight’s Moriah-Ticonderoga clash. Both of those teams are state-ranked.