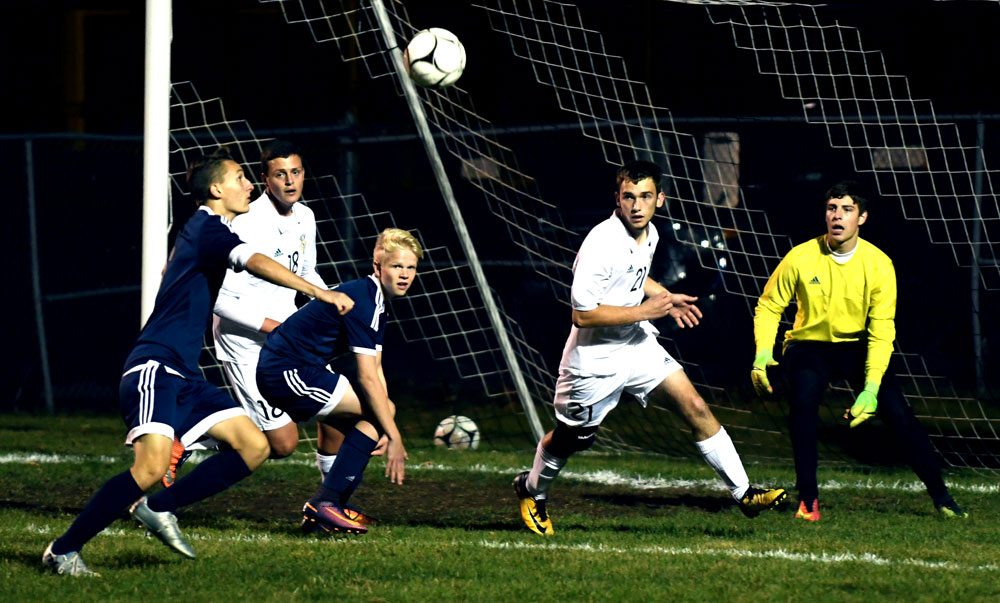 PICKETTS CORNERS — A year ago, Lake Placid coach Stuart Hemsley dubbed his players “The Five Guys” when they won their fifth consecutive Section VII boys soccer championship. This season, maybe “The Six Shooters” might be the right words used to describe the team.

The Blue Bombers did it again on Wednesday at Saranac Central, winning their second straight match in a shootout to claim the Section VII, Class C boys soccer title for the sixth year in a row.

Trailing 1-0 to Northern Adirondack at halftime, Lake Placid got a late goal from Joaquim Benavides to force overtime, and after neither team could summon up a winning shot during 30 minutes of extra time, the Blue Bombers prevailed in a shootout, outscoring the Bobcats 3-1 in penalty kicks to advance to the state playoff round.

Over the past two or three seasons, it was almost automatic that the Blue Bombers were going to win a sectional championship with all the experience, talent and firepower they had. But after graduating all their top scorers, success this year certainly wasn’t a given. This time around, grit and determination, as well as quickness, helped pave the way.

Lake Placid headed into the playoffs as the fourth seed after posting a sub-.500 record during the regular season, but since then has put together a three-match win streak while taking down the top two seeds in Class C. The Blue Bombers started off their postseason run by defeating AuSable Valley in a quarterfinal game last week. In Monday’s semifinal round, they battled to a 0-0 stalemate before defeating No. 1 seed Seton Catholic on penalty kicks, and accomplished the feat again on the same field in the final with the shootout triumph over the second-seeded Bobcats.

“We haven’t won three games in a row all season,” Hemsley said with a smile. “Those were three great games to win to get us to where we are now. We went down 1-0, and we really haven’t come back from a 1-0 deficit. That’s the first time we’ve come back. I’m liking the way we play.”

Hemsley said his team “came out like a train” in the final, as they nearly cashed in on two point-blank shots during the first 10 minutes of the match. Sophomore Justin Novik, who moved up from junior varsity for the playoffs, fired off a blast three minutes in but NAC goalie Lucas Smart made the save, and Matt White followed minutes later with a wide open attempt from in close that he rifled over the crossbar.

After surviving the early onslaught, the Bobcats got on the board when Cody Peryea scored with 10:09 remaining in the first half. Peryea buried a rebound after Lake Placid goalkeeper Jacob Novik made a diving save on a hard shot by Cody Lambert but was unable to corral the ball.

The Bobcats appeared to be on their way to finally ending a drought of coming up without a championship after losing five soccer finals in a row, but the Blue Bombers were able to rally. They tied the match with 6:05 left in regulation when Benavides, an exchange student from South America, came through with the equalizer on a low shot that got past Lucas. Jarell Paul assisted on the play.

Both teams had some great scoring chances throughout the match, but the outcome ultimately came down to penalty kicks, where the Blue Bombers got goals from Jasso Hannula, Benavides and Hayden Plank. Novick stopped three of NAC’s first four attempts in the shootout, and Plank then buried the game-winner to send his teammates and fans streaming onto the pitch to celebrate their school’s sixth sectional crown in a row.

“Obviously I was wicked nervous,” Plank said. “I knew I just had to keep my composure. If I let the nerves get to me I wasn’t going to be able to put it in. I’ve got a bit of a reputation for putting it over the net or wide so I was glad I was able to put it in.”

Plank, a junior who moved up to varsity two seasons ago for the playoffs, is one of the veterans on Lake Placid’s still very young squad.

“There was definitely some adversity we had to battle throughout the season,” he said. “We were only winning about one out of every three games, but now, we’re just hitting our momentum at the right time. We’ve been able to win these past three games. It’s definitely big being able to keep that streak alive. Six straight sectional titles — it’s important for the alumni, it’s important for us.”