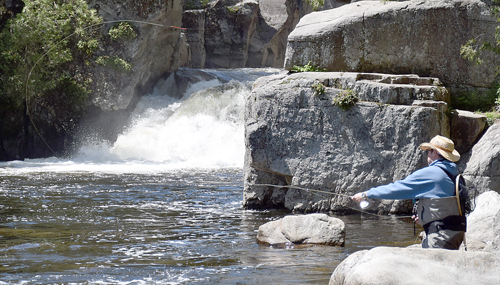 A fisherman casts for trout below the Flume in Wilmington during the second day of the Ausable River Two-Fly Challenge fishing tournament on Saturday. (Enterprise photo — Justin A. Levine)

Nearly 70 people registered for the event, which took place Friday and Saturday. In addition to two solid days of catch-and-release fishing on the West Branch of the Ausable River, participants and members of the community enjoyed live music, hot food and cold beverages. There were also fly-tying clinics and a casting competition.

Don Clute, who won the overall tournament with a combined catch of 1,278 inches, said he was back for his 12th year, and couldn’t have been happier to return to the area.

Clute, who is from Scotia, said he and his dad used to come fish the Ausable, and as of about noon on Saturday, Clute had already caught about 40 fish. That’s in addition to the 92 he caught on Friday. 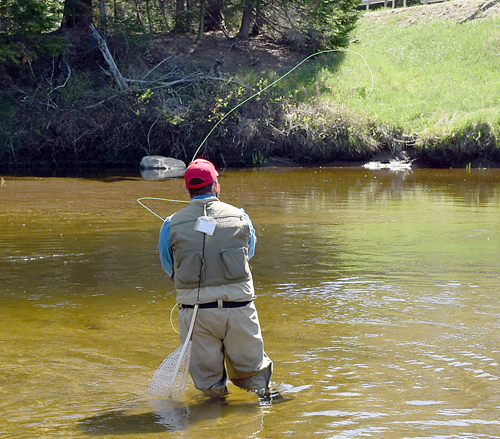 Mike Drislane, from New Jersey, casts for trout Saturday afternoon in the West Branch of the Ausable River. (Enterprise photo — Justin A. Levine)

The tournament, which is catch-and-release, calculated the combined total measure of all the fish caught by anglers over the two days.

Michelle Preston, who organizes the tournament for the Whiteface Visitors Bureau, said there were a total of 68 competitors in this year’s field, and about 90 people attended a banquet at the Pourman’s Taphouse in Wilmington Saturday night.

Preston said all of the money raised from the tournament goes back into preserving the river for future anglers.

“We support the (Ausable) River Association, (and) we help provide the stocking for the river as well,” she said. “And then, depending on the year, if there’s something else we find (we’ll support that). Like last year, we donated to Casting for Recovery for women with cancer.”

The banquet this year honored former Wilmington resident John Lafferty, who died last year and was the original creator of the tournament. There was also a fly-casting competition, won by Frank Kurcina with a distance of 66.3 feet.

Clute won the competitive division, and was followed in second place by John Tucci from Belvidere, New Jersey, who caught a total of 621 inches of trout. In the men’s division, Jack Hartpence (950) from Scotia placed first, Paul Clements (396.5) from Ossining was second and Ed Stalica (365) from Maine, New York, was third.

In the women’s division, Cynthia Morel (137.5) from Oswego claimed the top spot, and was followed by Beverly Perkins (115.5) from Milford, Connecticut and Vicki Leger (59) from Chester, Massachusetts in third. In the junior division, two locals fared well. Lake Placid residents Carter Day (32.5) was first while Ryan Tsack (16) took second.