Flights of fancy: hummingbirds in folklore 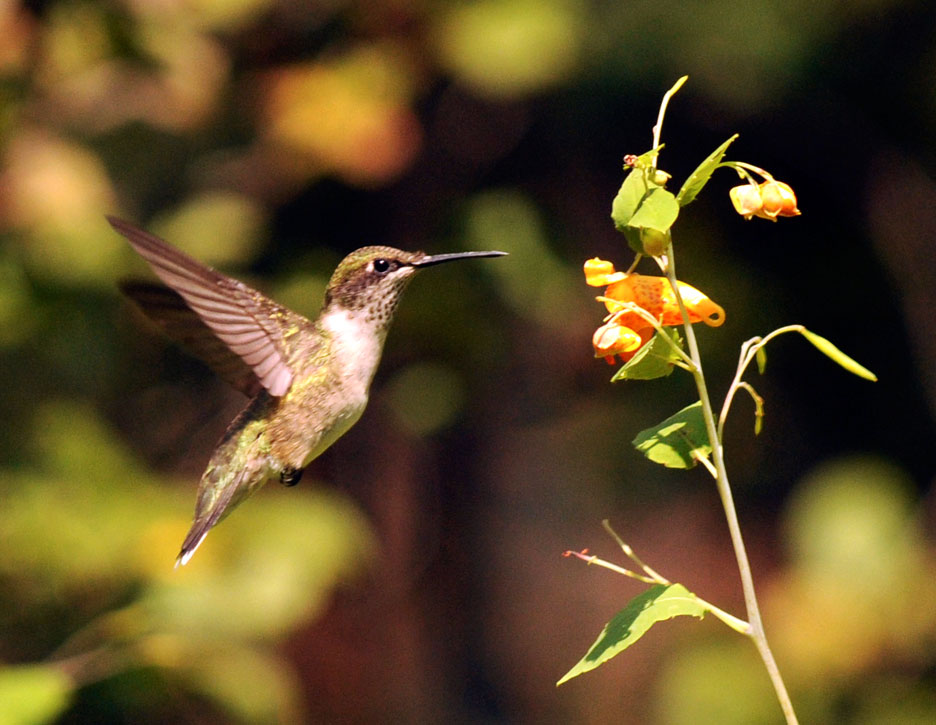 Found only in the Western Hemisphere, 330 to 350 types or species of hummingbirds feed, breed and nest in a band between Costa Rica in the northern hemisphere and an imaginary line running through the middle of Peru and the middle of Brazil in the Southern Hemisphere. Of this number, 12 to 15 species routinely nest in the United States, and a few others visit this country, then return to their southern homelands.

These tiny, acrobatic, beautifully plumed birds have been part of the legends and folklore of indigenous people from Canada and Alaska to Chile and Argentina for hundreds, if not thousands of years. As the ruby-throated hummingbirds that visit the North Country arrive, here are a few of these legends.

According to a Mayan legend, two hummingbirds were the last two birds created, fashioned from the scraps of all the other avians. Because of their small size, the Creator endowed them with extraordinary flying abilities and long bills to drink nectar from flowers. But the hummingbirds were drab in color, and when they were married, other birds took pity on them and gave the hummers some of their brightly colored feathers for wedding attire. The sun blessed the newlyweds with its rays to make their feathers shine when they faced it. Another version of the story has it that, because the hummingbirds never complained about their drab feathers, the Creator allowed them to wear their wedding outfits forever.

A Hopi story tells of a great famine when a young boy and his sister are left alone while their parents search for food. The boy makes a toy hummingbird from a sunflower stalk, and his sister throws it into the air. The toy bird comes to life and brings the children ears of corn. One day, the hummingbird flies to the center of the earth and begs the god of fertility to restore rain and plants to the parched land. The clouds bring rain, the earth becomes green and lush as food-bearing plants thrive, and the children’s parents return.

A Pueblo fable tells of a demon who is blinded after losing a bet with the sun. In anger, he spews lava, triggering fires that engulf the land. A hummingbird saves the people, plants and animals by gathering clouds from all directions to put out the fires. While flying through a rainbow in the aftermath, the hummingbird receives its iridescent plumage.

For the Aztecs, warriors killed in battle rose to the sky and circled the sun for four years before being transformed into hummingbirds. In the afterlife they fed on flowers in the gardens of paradise while engaging in mock combat to sharpen their fighting skills. At night these hummingbird angels once again become warriors, battling the powers of darkness and restoring light and warmth to the world. The sun rewarded the valor of the soldier-hummingbirds by giving them brightly colored feathers.

A Cherokee legend has it that a hummingbird and a crane were in love with the same beautiful maiden. The young woman much preferred the skillful flying hummingbird, who was as handsome as the awkward, slow-flying crane was ugly. The crane, however, was persistent in his determination to win the maiden’s hand. One day, to rid herself of the nuisance bird, the maiden agrees to marry the winner of a race between the crane and the hummingbird. Well aware of the hummingbird’s flying prowess, the young woman had no doubt he would easily win the race. She didn’t know that while hummingbirds fly only by day, cranes fly throughout the night.

The around-the-world race was to begin and end at the maiden’s home. Believing he faced no challenge from the crane, the hummingbird enjoyed a good night’s sleep after each day of leisurely flight. On the final day of the race, he arrives at the maiden’s home and was shocked to see the crane there ahead of him. Declaring she would never have such an ugly husband, the maiden reneged on her promise to wed the crane and remained unmarried the rest of her life.

Tobacco has long been used by Native Americans in rituals and religious ceremonies. Native American writer Virginia Drywater-Whitekiller relates a Cherokee legend of “when people and animals were the same” and there was “only one tobacco plant” that was stolen by geese (Dagul’ku) and carried to a distant land. The people suffered without tobacco; an old woman was near death. One after another, animals large and small that attempted to retrieve the sacred plant were killed by the geese.

A hummingbird said he could return the tobacco plant but was ignored because of his diminutive size. He begged for a chance and was told to bring back a plant from a nearby field. In what seemed no more than a moment, the hummingbird was sitting on the plant and in another instant had returned. Impressed by his speed, the people agreed to let him try and rescue the tobacco plant. The hummingbird flew to the land of the geese and snatched slivers of tobacco and a few seeds before the thieving birds realized what he had done. Upon returning, the hummingbird breathed smoke into the nostrils of the old woman who had fainted and thought was dead. She opened her eyes and was restored.

A legend from the Jatibonicu Taino people of Puerto Rico has parallels with Shakespeare’s “Romeo and Juliet.” Young lovers Alida and Taroo were from different tribes, and their relationship engendered deep criticism from family and friends of both groups. Especially unhappy, Alida’s father arranged for his daughter to marry a man from her own tribe. Prohibited from seeing Taroo, Alida prayed to the gods to deliver her from the forthcoming wedding. Alida’s prayers were answered, and she transformed into a beautiful red flower.

Unaware of these events, Taroo waited every night for Alida at the pool in the forest where they had first met. The moon eventually took pity on Taroo and told him of Alida’s transformation. Taroo prayed to the gods for help in finding his beloved. As they had with Alida, the gods responded to Taroo’s request by changing him into a hummingbird. The next time you see a hummer flitting from one red flower to another, it may be Taroo searching for Alida.

“The Race Between the Crane and the Hummingbird” (accessed 2019) Myth and Folklore, www.mythfolklore.net