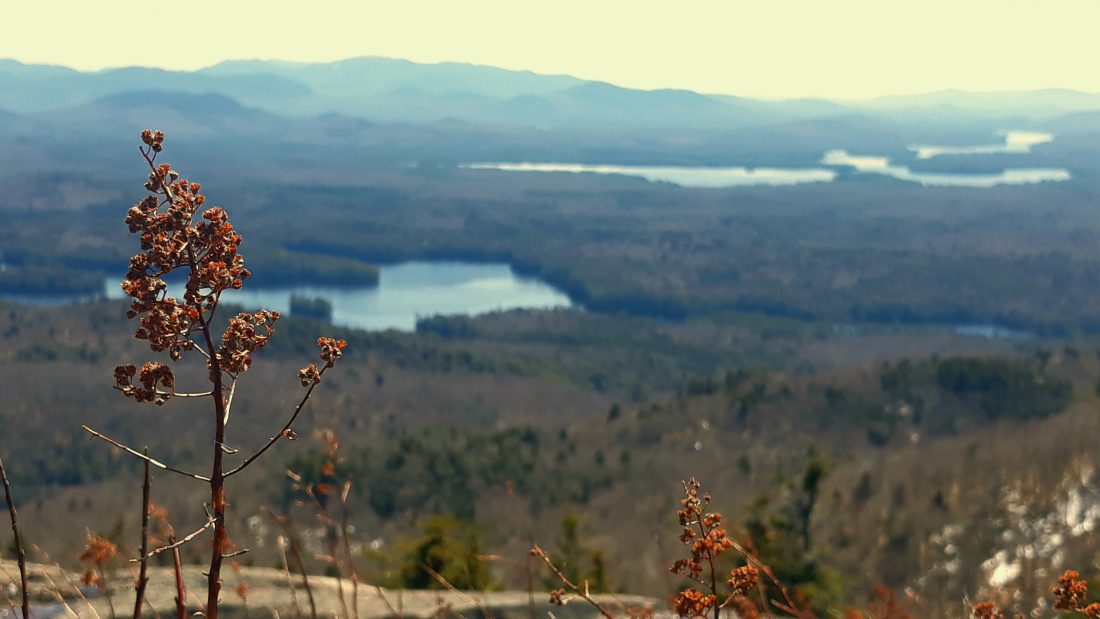 But a hike rarely starts without worry. Fears of making it to the peak meld with daily worries. On a sunny Saturday in April, I pulled into the St. Regis Mountain parking lot. It’s been months since quarantine has brought the modern world to its knees and over a month since I’ve been without work. But I’m not alone. The lot’s full.

After parking on the side of Keese Mill Road — no, I didn’t want to find another less-occupied hike — I headed across the bridge to the trailhead. In bold, black lettering were warnings of social distancing and an announcement of the closing of the fire tower. This was my fifth time up this mountain. The signs were the only external symptoms of COVID’s stranglehold on the public. The rest were interntal.

I wrote my third book last November. For 24 days I stayed inside my apartment, only leaving twice to get groceries. The isolation and the dark theme of the book — a murder mystery — challenged me. Confinement, even of my own accord, was a mental challenge that tested and pushed me. I don’t regret it, but next time I’m going to get out of the damn house before I lose my mind. When the world shuttered and forced self-isolation was imposed, I knew people weren’t ready. Everyone ran to the store. No one knew to prepare their minds, not just their stomachs. Thank God for the warming weather and outdoor recreation.

My hikes are a time to let the mind unwind and scan things that have been troubling me. Work, family and relationships are a common theme. I often find a solution or a greater understanding on my hikes. They also show me how much I’ve been slacking off in the exercise department. I started strong, breezing by several groups. And then, on the final stretch, I felt like a freshman at his first party; breakfast was looking to make an encore. 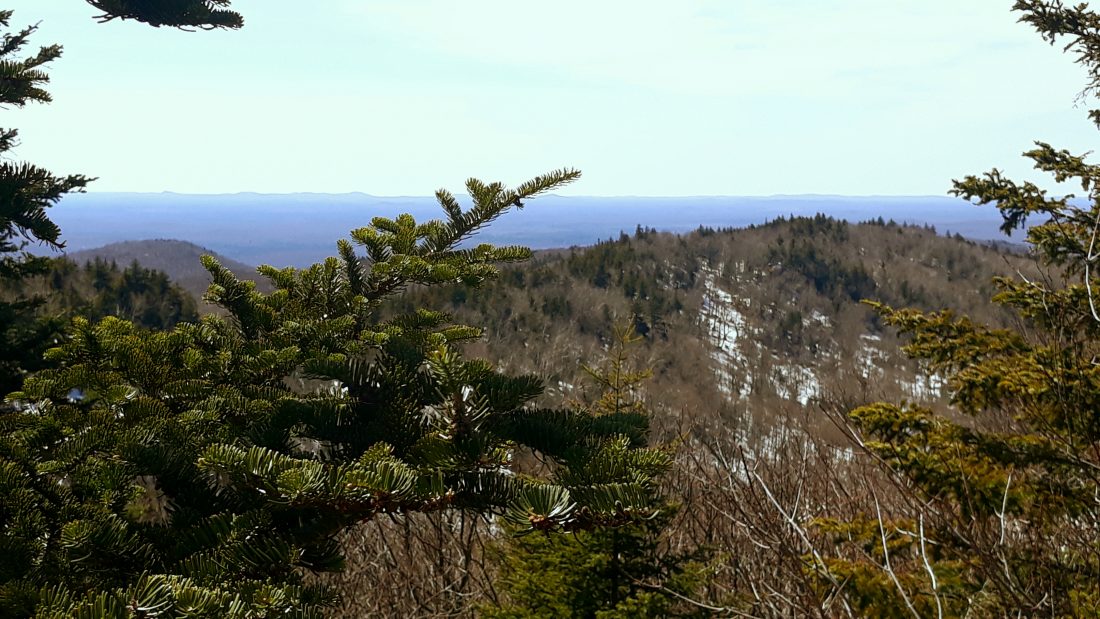 My hands rested on my head as my labored breaths did little to ease my discomfort. A family I’d passed earlier elapsed me. We shared brief words, chuckles and good wishes. I love the camaraderie of the trail. Everyone’s excited to be outside and hike. A few minutes of conversation are often shared, and a bond temporarily exists. Since the pandemic, however, these are less common, and instead worry has crept in. People meet your gaze and shift their gaze to their feet. What’s the proper etiquette now?

I collapsed on the peak. Yes, it was beautiful; You all can probably imagine how it looked — I would’ve preferred more clouds. The sun was warm and inviting, however, and I laid next to the lichens. My restful sunbathing was disturbed three times by fluffy doggos, something I’m not complaining about. Over the sound of my headphones I heard the chatter within and even among groups resting on the peak. Dog owners chatted about their pets, and adults shared their experiences at home. Everyone admired the view.

The peak is a mandatory pause. You break after beating your lungs and heart like a drunk Bills fan pounding his stomach in the nosebleed section. You lie down, drink (water, you ingrates) and rest. But after the thoughts jump in. The world lies ahead of you. Mountains, rivers, lakes; depending where you are, sometimes states, nations or other continents. It’s a moment of reflection. The worries and ideas you’ve churned in your mind but pushed down once you started to die in the final stretch resurface. The high-altitude clarity offers a final suggestion. You then take it or return to the churning.

Each peak offers a different idea, and each hiker sees a different view. The young see opportunity. The elderly see the past. Those in between see a mix. Not to say one generation can’t share the same view as another. That day I saw the last six years I’d been up here. I’d swum in those lakes and rivers, gone to school in those buildings, explored those forests.

After an hour I decided I should head home. I could easily stay up here for hours. On a far-off boulder a group of teenagers passed a water bottle and snapped pictures of the view. Music gently bumped from a portable speaker. They seemed relaxed. How long had it been since they’d seen each other in person? Screens aren’t an apt replacement for social contact. I’m glad they’re hiking. 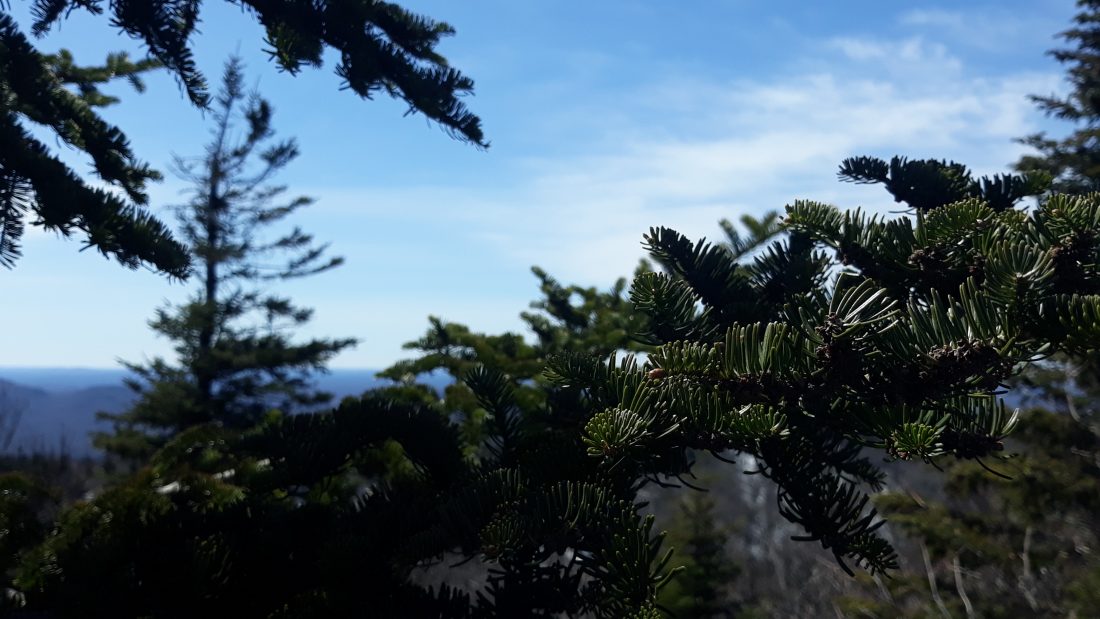 Shadows stretch across moss-covered boulders, some taller and wider than homes. Curt Stager would say they’re there because of glaciers. My childish imagination says they’re the final remains of giants. The vegetation and trees that grow on their fossilized backs are reminders of finality and greatness.

Trees’ amber shells lie among flattened ferns. They catch honey-colored rays. The sun is setting. It’s the best time for nostalgia — a pained cry for a place that cannot be and never was, but also a filter that we put on our fondest memories, recent and distant.

I’ve just come back from visiting family and friends in Connecticut and Philadelphia. There the virus is not just next door but roaming the streets. It’s in your store, in your park, at your door. That shows in people’s faces. They sidestep and leap out of your way until you’re greater than 6 feet away. On the trails, there is no conversation. Once a hiker appears from around a bend, a dance begins of who’s going to which side of the trail, or who’s stepping off the trail if it’s not wide enough for two. The positions are decided well before facial expressions can even be distinguished.

In northern New York, the fear of corona is less potent. It’s certainly knocked down many businesses, but individuals are less worried about contracting COVID-19. My first day back into Saranac Lake I heard several people on the street force exaggerated coughs, eliciting laughs from friends. This village, which escaped the Spanish Flu, is doing well, but bad choices and bad decisions could create a surge in cases. In St. Lawrence County and Franklin County, the numbers of confirmed cases are rising. If they continue to do so, what will happen to the trail? What of the trail bonds, the mandatory pauses, the inspiring views? Where will we go then?