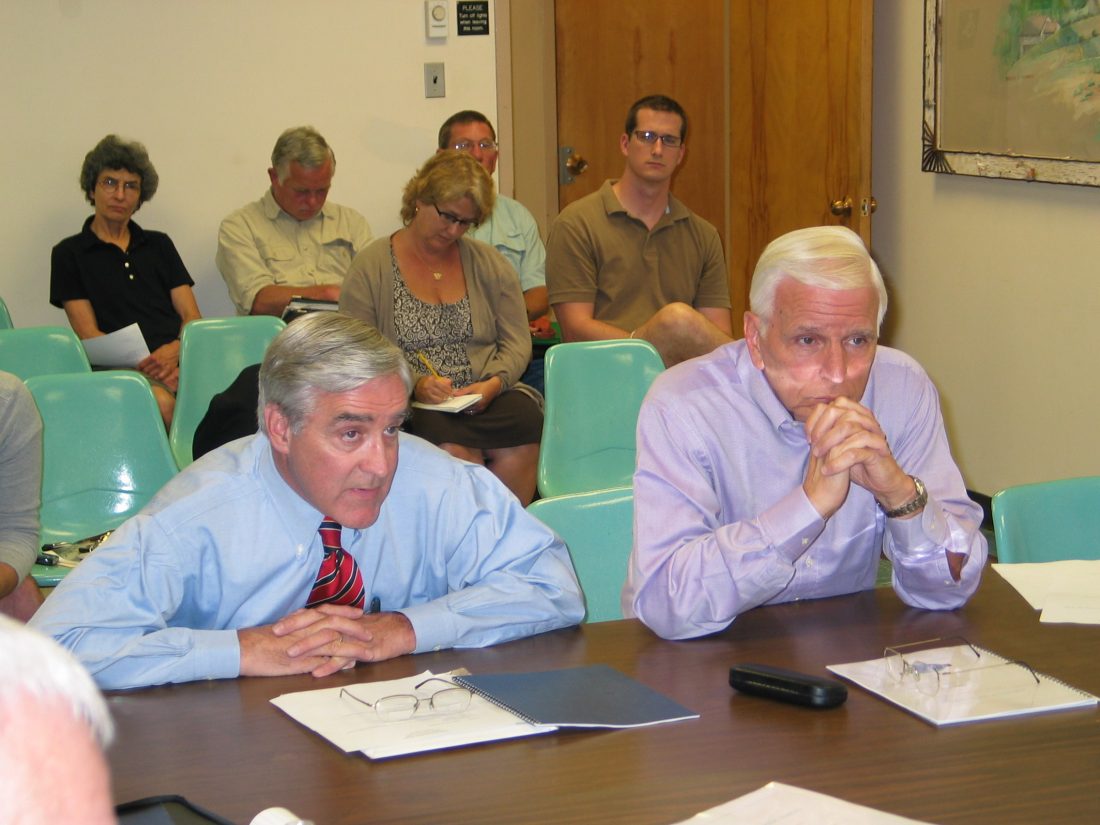 Adirondack Railway Preservation Society board President Bill Branson, left, and board member Ed Kennedy speak with the North Elba town board in August 2009, asking why the town had refused to support an extension of ARPS’s Adirondack Scenic Railroad. Town leaders said they felt the railroad service had little to no economic impact on Lake Placid and that the railroad corridor between Saranac Lake and Lake Placid could be better used as a recreational path for bicycles and snowmobiles. (Enterprise photo — Chris Knight)

Who says the rail-to-trail conversion of the travel corridor connecting the Tri-Lakes won’t give the area a big boost? Bill Branson has been saying so, over and over. He seems skeptical about rail trails everywhere, despite their proven success. Most recently, he pooh-poohed the benefits of the popular Virginia Creeper Trail in the Blue Ridge Mountains, an all-season, multi-use trail that is similar in many ways to the one planned for the Tri-Lakes.

As president of the Adirondack Railway Preservation Society, Mr. Branson hopes to extend, at taxpayer expense, a costly and impractical tourist train from Utica all the way to Lake Placid, thereby monopolizing the entire, state-owned travel corridor that runs from Remsen, just south of Old Forge, through much of the Adirondack Park. This would prevent use of the Tri-Lakes section of the travel corridor for bikers, walkers, joggers and nature lovers. It would preclude use of this public asset as a safe, scenic place for young and old to enjoy the outdoors.

For many years, Mr. Branson and his colleagues have belittled rail-to-trail success stories from other parts of the country. Mr. Branson’s latest target, the Virginia Creeper Trail, runs 34 miles from Abingdon to Damascus to White Top Mountain in southwest Virginia. It’s the same length as the long-awaited Tri-Lakes rail trail, which will traverse a similar landscape of forests and mountains between Lake Placid, Ray Brook, Saranac Lake, Lake Clear and Tupper Lake, with a wilderness component that skirts the lakes and ponds of the St. Regis Canoe Area.

In his Feb. 4 commentary, Mr. Branson questioned the economic benefits from bike riders and other users of the Creeper Trail. He misrepresents a University of Georgia study using data from 2003, erroneously claiming that it found 96% of trail users to be local. What the study actually found was that 47% of an estimated 130,172 visits during that 12-month period were local users. Non-local visits totaled 53%. The study also found that “the trail is a highly valuable asset to the people who enjoy using it and to local businesses who benefit from the trail-related tourist expenditures.”

But even if Mr. Branson’s claim had been accurate and 96% of trail users were, in fact, local, what’s wrong with that? The use and enjoyment of the Creeper Trail by a high percentage of local residents would suggest the obvious: A rail-trail connecting the Tri-Lakes will enhance the quality of life for those who live anywhere near the corridor.

It’s also worth noting that 10 years after the University of Georgia study was undertaken, tourist officials in Abingdon estimated the trail was attracting 250,000 users annually, twice the number identified in the University of Georgia study in 2003. In a letter to the Enterprise in 2016, Richard Smith, whose property in Damascus borders the trail, wrote: “The Creeper’s economic impact on both towns is massive. … The rail trail requires little maintenance, has many volunteers willing to work on its constant improvement, and the costs of upkeep are only a tiny percentage of the money it brings in.”

My wife and I biked the Creeper Trail several years ago, and we can attest to its popularity. Ditto for other favorite rail trails of ours, including the 46-mile Withlacoochee State Trail in Florida, where some 400,000 annual visitors have an economic impact of $30 million (according to state estimates); the 16-mile Swamp Rabbit Trail in South Carolina which, with some 500,000 annual visitors (documented by Furman University), has revitalized Travelers Rest, a town comparable in size and economic challenges to Tupper Lake; the Erie Canalway Trail between Albany and Buffalo, which generates some $253 million a year in sales and $28 million in taxes (according to research by Parks and Trails New York); and the Island Line Trail on the Vermont side of Lake Champlain, which runs 14 miles between Burlington and Grand Isle and has long been Burlington’s prime recreational attraction (along with the lake itself).

Rachel and I once bought tickets and rode the Lake Placid-Saranac Lake tourist train during its shaky 15-year operation. We found the ride to be of interest, but one trip was enough. In return, we encourage Mr. Branson to sample one of our nation’s many rail trails — there are now more than 2,300, and their number is constantly increasing. In so doing, he will be able to enjoy the benefits of healthy exercise and fresh air, whether he’s biking, hiking, jogging, walking his dog or just taking a leisurely stroll. He will be able to commune with nature up close and personal, and he may learn something about local history and culture along the way, as many rail trails have informative signs and kiosks along the way. It won’t cost anything to do this, and he can repeat the experience whenever he feels like it.

When Mr. Branson discovers the fun he’s been missing, how could he not become yet another advocate for the Tri-Lakes rail trail? And when that happens, the seemingly endless debate may finally be over, and we can all look forward to enjoying what promises to be one of the Adirondack Park’s finest recreational amenities.

Dick Beamish lives in Middlebury, Vermont, and is a board member of Adirondack Recreational Trail Advocates and founder of the bi-monthly Adirondack Explorer magazine.