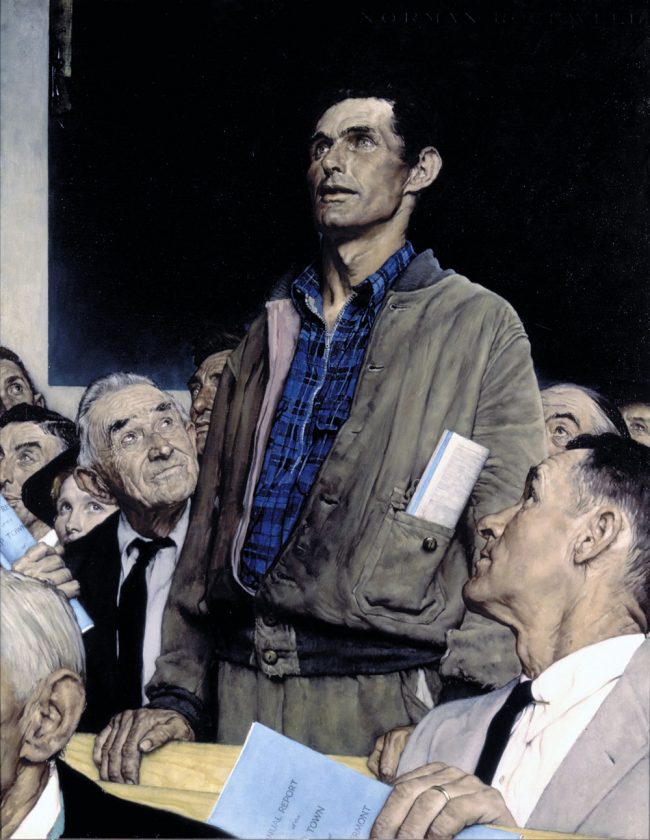 The First Amendment isn’t getting the appreciation and respect it deserves. Increasingly battered and misunderstood, it needs all the support it can get as divisive politics and advancing technologies drag us in new directions.

Many Americans don’t even know the basics.

That’s certainly an improvement over 2018, when a pitiful 60% of those polled could name at least one of the five freedoms. But consider this: Of the 1,007 Americans polled for the 2019 survey, just six people correctly named all five freedoms.

Better yet: We all need to work harder at being citizens who understand our rights, our responsibilities, how government works and what we value.

These powerful First Amendment freedoms, for example, give us all the courage to be independent thinkers and to live our lives how we want to. They allow us to challenge authority in ways unheard of in so many other parts of the world. It enables the press to act independently, hold government accountable and tilt at the occasional windmill.

Gene Policinski, president of the Freedom Forum Institute, said these freedoms help define who we are as Americans. For him, the First Amendment is the “blue-collar amendment” — because it’s such a workhorse, going to work every day in a real down-to-earth way.

There is some good news. The poll did not find substantial erosion in trust in journalism, with 72% of those polled agreeing that it’s important for our democracy that the news media act as a government watchdog, down from 73% in 2018. Policinski, however, worries that result may be skewed, reflecting people’s loyalty to their individual “information bubbles.”

The emergence of powerful social media platforms has also muddied the waters; 65% of those polled agreed that social media companies such as Facebook and Twitter violate users’ First Amendment rights when they ban people. They don’t. The First Amendment’s protections apply to the government, not private companies.

But the First Amendment presents us with all sorts of emotional and intellectual challenges. It’s easy to support free speech when we agree with what’s being said. It’s far more challenging when we disagree or abhor what is being said, printed, painted, built or sung.

Indeed, the First Amendment has challenged us as a society as we have debated topics such as school prayer, flag burning, printing classified information, curfews, the teaching of evolution, protests at military funerals, blue laws, Christmas displays in public parks and mandatory measles vaccinations.

Maybe we just need another Norman Rockwell for an idealistic reboot.

In the 1940s, as the U.S. headed into what would become World War II, Rockwell’s series of freedom paintings helped Americans understand the freedoms at stake. His four iconic works captured parts of the First Amendment (freedom of speech and religion) and added the freedoms to be free of want and fear.

Despite President Franklin Roosevelt’s oratory, the “four freedoms” he outlined in 1941 speech failed to resonate with the public in a meaningful way. For help, the White House reached out to the nation’s artists and musicians.

“(Rockwell) wanted to interpret them in a way the average American could understand,” said Stephanie Plunkett, chief curator of the Norman Rockwell Museum in Stockbridge, Massachusetts.

But it was a challenge. “The Four Freedoms are so darned high blown. Somehow I just couldn’t get my mind around it,” Rockwell is quoted as saying.

But by using scenarios from real life in small-town America, he did just that. Rockwell’s “Freedom of Speech,” featuring a man standing up and speaking up in a crowded meeting room, was based on an actual town meeting in Arlington, Vermont. The man was a farmer unhappy with a school project that would increase his taxes. “He gave his opinion, nodded his head and sat down,” Plunkett said.

Rockwell’s idealistic “Four Freedoms” have remained popular, both providing a sense of what led America to World War II and as underscoring ideals that remain important throughout in the world, Plunkett said.

A special touring exhibit, “Rockwell, Roosevelt & The Four Freedoms: Enduring Ideals,” has been on display in Normandy, France, since May as part of the 75th commemoration of the D-Day invasion. The exhibit returns to the U.S. from France this fall, making stops in Houston and Denver before returning home next fall. Here are the details: Le Memorial de Caen, Caen, France, through Oct. 27; Museum of Fine Arts in Houston, Texas Dec. 15, 2019 through March 22, 2020; Denver Art Museum, Denver, May 3, 2020 through Aug. 23, 2020; Norman Rockwell Museum in Stockbridge, Massachusetts, Sept. 12, 2020, through Jan. 17, 2021.

Judy Patrick is executive vice president for editorial development at the New York Press Association, based in Cohoes.