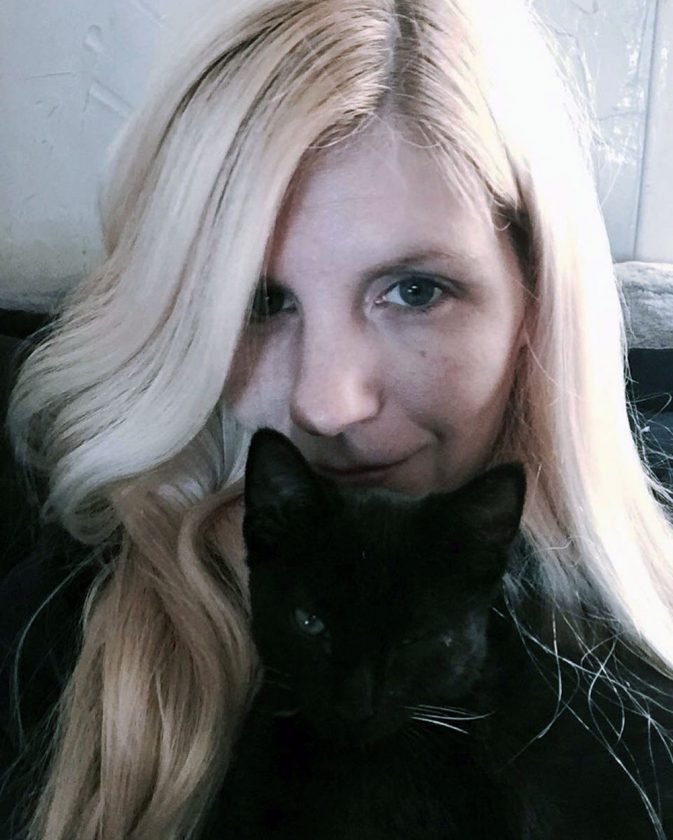 This wasn’t entirely unusual. In his three years growing up as an indoor/outdoor cat, he would occasionally be naughty and stay out all night.

By the second night, however, I was concerned.

My parents live in the Lake/View Street neighborhood in Saranac Lake. Their house is surrounded by forest and is on the edge of Dewey Mountain. In their decades living there, they have seen just about every type of wild animal that lives in the Adirondacks on their property, including foxes and fishers, which have been known to prey on cats.

I also worried because Angus has a handicap: He’s been missing his left eye since he was three months old. It was injured while playing at home and was so badly damaged the vet had to remove it.

On the afternoon of Aug. 12, I went looking on Dewey Mountain. I walked all of Riverside Drive and Glenwood Drive, calling his name.

My other black cat, Dexter, became noticeably distressed. He searched around the house for Angus as if he was just hiding someplace.

On Aug. 14, my mother got some flyers printed downtown and I put them in mailboxes all around the neighborhood. I also tacked some up on bulletin boards downtown. I left one at the Tri-Lakes Humane Society, and they also suggested I send them a photo so they could put a “missing” ad on their website. One of the volunteers suggested I put a missing pet ad in the newspaper. I emailed the photo with information to the Humane Society, and they put an ad online. I sent another email to the classifieds editor at the Adirondack Daily Enterprise, and they put an ad in the newspaper as well as online.

On the afternoon of Aug. 16, a woman who lives in Vermontville, named Naoma, sent me a message on Facebook and informed me she had seen Angus near the Franklin Town Hall. I drove out there and met with her. We called and called, but he was gone. She was positive it was Angus. I left sad and not sure.

At 6 a.m. the next morning, Aug. 17, I returned to her neighborhood, put flyers in mailboxes and slid them under the doors of the town hall and post office.

I went through my days. My kids and I missed him and talked about Angus often. My 5-year-old daughter never gave up hope; she said he was just lost. Time slipped by. That large wild cat was seen on video, walking through the village, other cats went missing, and I became convinced that Angus had fallen victim to that large cat or some other predator. I had no closure, no information on what happened, but I had to find a way to accept that he was gone.

A month went by.

On Sept. 27, Naoma contacted me again. She said her husband had just seen Angus dash across Route 3.

I raced out there. I met with her husband near their house; he showed me where Angus had run. I thanked him and hiked all over that patch of forest along the road, calling for him. I never saw him. I still wasn’t sure if it was even my cat all the way out in Vermontville.

On Sunday, Oct. 13, a woman named Annie posted on Facebook that she had seen a one-eyed, six-toed black cat on her property, and she remembered seeing the flyer in her mailbox but forgot the info on it. She posted asking who was missing this cat, and the community responded. Several people commented and tagged my daughter Molly and me in the post.

We were able to get in touch with each other on Tuesday, Oct. 15, and she told me she had been seeing Angus on her property for a couple of weeks. She and her husband began leaving a little food out for him, and he was eating it.

She lives across the road from Naoma, who had originally seen Angus in August and September. There was a one-eyed, six-toed black cat out there in Vermontville, and I now felt in my bones that it was my missing cat.

I returned to the Humane Society that day. They loaned me a Have-a-Heart trap to try to capture Angus. (This is a humane cage trap that is only triggered to close and confine the animal when it walks inside.)

I set it up on Annie’s property with some cat food and a towel from home.

She and I kept checking on it for days.

Some days last week were very cold. On Thursday, Oct. 17, it was very windy and wet when I went out to check on it. Still empty. My hopes dropped. I began to worry he wouldn’t go for the trap.

A friend suggested I try sardines instead of cat food, so I tried that.

On Friday, Oct. 18, I checked it in the morning before work and again afterward. No Angus. The sardines remained untouched.

On Saturday morning, Oct. 19, I put a fresh tin of sardines in, as the other had frozen and wasn’t as stinky anymore.

I returned home, and in less than 15 minutes of getting home, Naoma messaged me. She wrote: “Please be available now!” When I asked her if Angus was there, she said yes, he was. She gave him milk and cat food to get him to stay put if I could hurry out there right then.

I dashed right back out for my second trip to Vermontville in an hour. When I pulled into her driveway, I saw Angus. She and her husband were standing by their house, and he was in the back of the driveway by the grass. Parking my car and walking across the driveway was a blur.

I walked up to him and scooped him up, saying yes and bursting into happy tears. He cradled right into my arms, bonier now as he had lost a lot of weight. It felt amazing to be holding him again. Both she and her husband hugged me while I held him. I thanked them over and over.

I then drove my car across the highway to Annie’s house to collect the Have-a-Heart. She came outside, and I showed her I had Angus with me in my car. She shared my excitement and joy, congratulating me on getting him back. I thanked her for her help and for letting me put the trap on her property. I hadn’t grabbed a cat carrier in my run out the door, but I didn’t need it. Angus slept on my lap the entire drive home, letting me pet him while he purred.

We returned home, where I surprised both of my daughters with Angus in the living room. My other cat, Dexter, had to immediately check him out and thoroughly inspect him, but was happy to see him again. My family feels whole again, an open wound is magically healed. I wish we could find out how Angus traveled 10.7 miles from Saranac Lake to Vermontville, but we likely will never know.

Most of all, thank you to Naoma, to Annie, to their husbands and everyone in this extended community who kept an eye out for my little one-eyed cat.

We are just so grateful to have him back home.