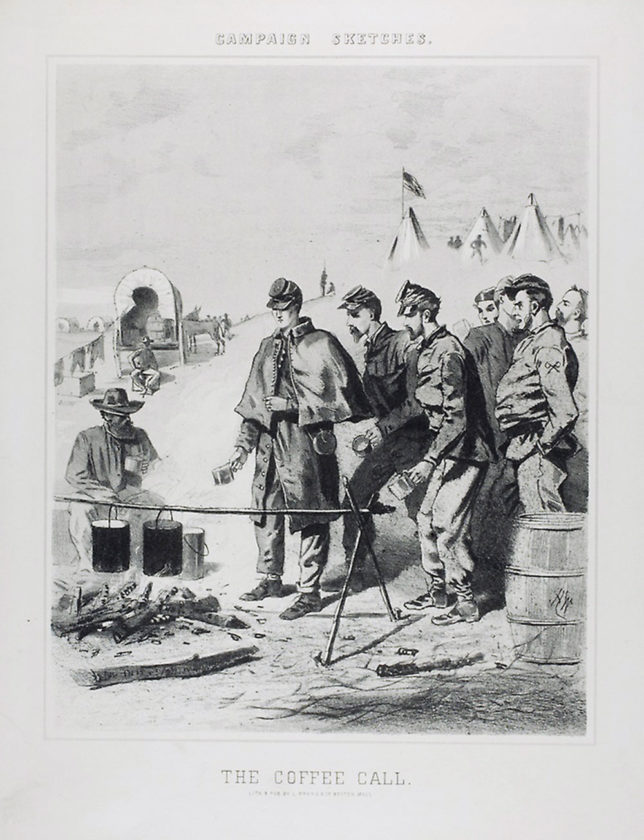 “The Coffee Call,” a drawing by Winslow Homer, shows Army of the Potomac soldiers waiting for coffee at a campfire in an encampment during the Civil War. (Public domain image)

In his classic work “The Life of Billy Yank: The Common Soldier of the Union,” historian Bell Irvin Wiley states that soldiers “cherished” coffee during the Civil War (1861-65). According to Wiley, the effect this beverage had on troop morale was considerable. “And if it cannot be said that coffee helped Billy Yank win the war, it at least made his participation in the conflict more tolerable.”

Jon Grinspan, a curator at the Smithsonian Institute’s National Museum of American History, notes that coffee fueled the war between North and South. “Soldiers drank it before marches, after marches, on patrol and during combat.” Grinspan quotes a Union cavalryman who wrote that in the final month of the war, “We are reduced to quarter rations and no coffee, and nobody can ‘soldier’ without coffee.”

Reading through diaries and journals of Union soldiers, Grinspan found the word coffee was more prevalent than the words war, bullet, cannon, slavery, mother or Lincoln. According to Grinspan, these men routinely wrote about “the coffee they had for breakfast, or the coffee they wanted to have for breakfast.” Soldiers were so determined to have their favorite brew that if clean water was not available, they made coffee from water found in “puddles, brackish bays and Mississippi mud, liquids their horses would not drink.”

Union troops received an allotment of 36 pounds of coffee a year — just over 1.5 ounces a day. In the early months of the war, soldiers typically received ground coffee that was often mixed with sand and dirt by unscrupulous contractors conniving to increase their profits. To put an end to this practice, the government started buying whole bean coffee. If the beans were green, they were roasted in frying pans, crushed, then put in a pot with water and boiled. Soldiers would sometimes strain the grounds through a cloth, pouring the liquid into a another container.

If clean cloth was not available, the grounds were left to settle at the bottom of pots called “muckets.” Grinspan notes that slaves who escaped to Union lines could often find work as cooks and were especially valued if they were proficient at “settling” — getting the grounds to sink to the bottom of the unfiltered muckets and yield a grounds-free cup of coffee.

As milk was rarely available and sugar was hit-and-miss, soldiers learned to drink their coffee black and, according to an Illinois infantryman, “strong enough to float an iron wedge.”

Grinspan states that Union General Benjamin Butler was aware of the effect caffeine had on soldiers and ordered his men to carry coffee in their canteens. He planned his attacks, in part, when his men were most caffeinated. Butler told a senior officer prior to a battle in October 1864 that “if your men get their coffee early in the morning, you can hold.”

Coffee and other foodstuffs were, with few exceptions, readily available in the Union Army. However, it was a different story for Confederate soldiers and, as the war progressed, for civilians in the rebellious states. As a consequence of the Union Navy blockade, by the spring of 1863 there were food shortages in numerous Southern cities and a food riot in the Confederate capital of Richmond, Virginia. A nurse in Alabama stated jokingly the fierce craving for coffee in the South would be the North’s “means of subjugating us.”

When short-lived informal truces occurred on the battlefield, Confederate soldiers would swap tobacco for Yankee coffee. One can imagine how good that first sip tasted after months of consuming wretched coffee substitutes made from potato peels, beets or cotton seeds.

Coffee was all but indispensable for eating “hardtack,” a 3-inch square biscuit made of flour and water that was hardened after baking to increase its shelf life. Among the many descriptive names soldiers had for hardtack were “teeth dullers,” “flour tiles” and “sheet-iron crackers.” One Union soldier offered the following prayer before eating his hardtack meal: “Please turn our water into wine and bless and break these crackers.”

Union Army veteran John D. Billings noted in his 1887 book “Hardtack and Coffee,” these rock-hard biscuits — “which frequently furnished the soldier his breakfast and supper” — were crushed “with a very strong blow of the fist,” a rock or a rifle butt, the pieces then dumped into hot coffee to soften before eating.

Produced by the tens of millions during the war, hardtack not properly stored and kept dry became “worm castles” infested with maggots and weevils. Billings notes that “It was no uncommon occurrence for a man to find the surface of his pot of coffee swarming with weevils after breaking the hardtack in it … but they were skimmed off, and left no distinctive flavor behind.”

Soldiers loved coffee if for no other reason than it was one of the few things they could ingest that didn’t make them sick. Northern soldiers routinely made “skillygalee,” hardtack soaked in water then fried in pork fat. Confederate troops ate “cush” or “sloosh,” cooked beef and corn meal fried in bacon grease. Union physicians referred to these methods of food preparation as “death from the frying pan.” According to one estimate, 95 percent of soldiers in both armies suffered from intestinal problems, often severe.

Even when the coffee was bad, it was appreciated. In a letter to his family, a 16-year-old soldier wrote: “The coffee you probably wouldn’t recognize in New York. Boiled in a kettle, and about the color of a brownstone front, it was nevertheless … the only warm thing we had.”

Noting how important coffee was to the psychological well-being of soldiers, John Billings spoke for nearly everyone who fought in the American Civil War when he wrote about the soothing brew: “What a Godsend it seemed to us at all times.”

George J. Bryjak lives in Bloomingdale, is author of “Voices from the Civil War: North and South, Men and Women, Black and White,” and is retired after 24 years of teaching sociology at the University of San Diego.