ARTA is trying to mislead you 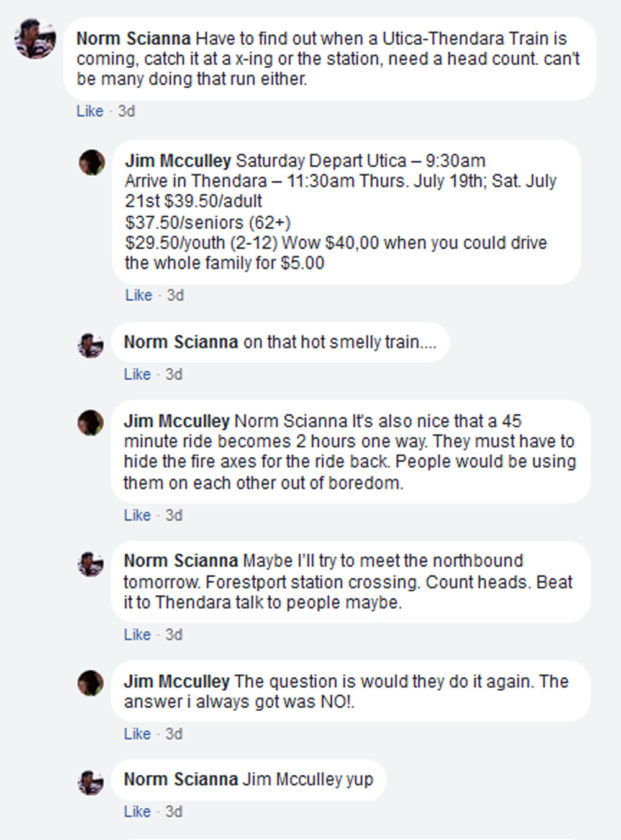 The rails are quiet, but yet the hatred and deception continue …

In a column from Adirondack Recreational Trail Advocates’ Dick Beamish once again touting the usual talking points against the Adirondack Scenic Railroad and the restoration of service on the north end of the rail line, the usual fact skipping is again rampant. A major example of his write-up in trying to paint one picture by leaving out pertinent facts is when he is discussing the Lamoille Valley Rail Trail near his new home in Vermont. Dick quotes the following from Stowe Magazine:

“Speaking of the Lamoille Valley RT, here’s an excerpt from the current issue of Stowe Magazine about the progress being made on this rail-to-trail conversion that will extend all the way across northern Vermont:”

The first issue of business here is that the article that Dick is indeed quoting from can be found in the “Summer/Fall” issue of the “Stowe Guide & Magazine” from 2017 (https://issuu.com/stoweguideandmagazine/docs/sg_summer_2017_issuu). Can Dick tell us how he determined this to be the “current” issue?

Dick then proceeds to cut and paste from the “current” article to help build his point:

“The line, constructed in 1877, transported passengers and freight between St. Johnsbury and Swanton for nearly a hundred years. Service stopped in 1973, when the railroad went bankrupt. Vermont acquired the right-of-way, and in 1997 the Vermont Association of Snow Travelers began using it as a snowmobile trail.”

Now … I will play devil’s advocate here and say that Dick did not write this himself as it is right there in the article word for word, however it is highly slanted in Dick’s favor due to the fact that it is missing some very pertinent information. Service did *not* stop in 1973. The then-owners of the line of the line did indeed sell out to the state of Vermont, and Dick would want you to believe that this was the end of the route, a la the Adirondack Division from Remsen to Lake Placid. What the article fails to mention (and what Dick failed to correct) is that the line still ran under lease agreements with other companies throughout into the late 1990s, and the towel was thrown in *not* because of complete loss of business but instead due to catastrophic flooding along the line, which destroyed the right of way so severely that rebuilding was deemed not feasible, and the state of Vermont moved in and began focusing on a rail trail with heavy backing from the local snowmobile contingent.

By his either insufficient research or blatant disregard of putting forward the actual facts, Dick has painted a picture which may or may not be completely factual and accurate toward achieving the ARTA goal of ripping out the rails and building a trail in the Adirondacks.

Meanwhile, over on social media, ARTA board member Hope Frenette is calling foul on the recent Freedom of Information filing that shines a light on the fact that the majority of comments received by the Adirondack Park Agency in response to their DSEIS amendment to the Remsen-Lake Placid Travel Corridor show that “By a significant majority, the response favored Alternative 1, take no action,” according to Bill Branson, president of the Adirondack Scenic Railroad. Hope retains her typical anti-rail-supporter tone when quoted as saying, “More Fake news from the ASR. Just because the hoi poloi of railfans from outside of our beloved ADKs and NYS, as well, drown the APA in postcards means nothing. The folks that count are the residents …”

And don’t think that for a second that just because the railroad isn’t operating in Lake Placid doesn’t mean that there hasn’t been your typical stalking of empty parking lots. What was once a much-documented activity from ARTA board member and Lake Placid businessman Jim McCulley has now seemingly moved south to the Thendara-Old Forge region. ARTA supporter Norm Scianna of Forestport has now picked up the slack by posting early morning videos and pictures showing the railroad parking lot in Thendara, as well as openly discussing the process with McCulley on Facebook. (Screenshot attached.)

It’s good to see that while the Adirondack Scenic Railroad has kept looking forward this season after Judge Main’s decision that struck down the proposed ripping up of the rails, ARTA still shows that it does what it set out to do best: Go after the railroad and its supporters at any cost, be it factual or not.