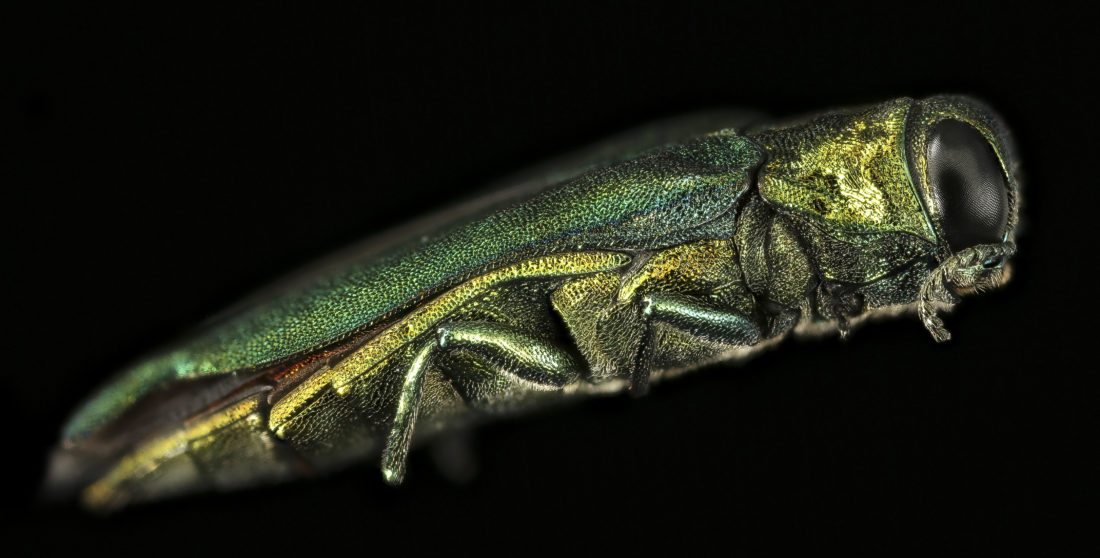 The emerald ash borer is an invasive beetle native to Asia that kills ash trees. (Photo provided from Wikimedia Commons)

Recent news of the discovery of the emerald ash borer in Franklin County and the hemlock woolly adelgid near Lake George crystallizes the threat that imported forest pests pose to the Adirondacks. The emerald ash borer, a small green beetle from Asia, is poised to wipe out all of the ash trees in the region — and potentially North America. The hemlock woolly adelgid, an aphid-like insect also from Asia, is likely to decimate the population of hemlock trees that are the foundation of many of our old-growth forests.

There are predictable calls to “do something,” but in fact, there is little that can be done to stop the spread of well-established pests like these. In the case of the emerald ash borer, we lost that battle when it first entered the country, hidden in wooden pallets shipped to Detroit in the 1990s. Efforts to stop it since then have been futile as it can now be found in 30 states and is continuing to spread. While we may be able to temporarily slow expansion of the emerald ash borer, our ash trees are most likely, in the long run, doomed.

These two pests are not the only problems. Nearly all of the beech trees in the Adirondacks are infected with beech bark disease. Many of our balsam firs are dying from the balsam woolly adelgid, a cousin of the hemlock pest. Further south, in the Catskills and Hudson Valley, there are even more pests. In fact, New York state has over 60 imported tree pests — more than any other state.

These pests are not separate problems. They are all symptoms of the same problem: lax trade regulations that allow dangerous pests to slip into the country undetected along with international imports. The chief culprits for carrying these unwanted visitors are solid wood pallets, which can have wood-boring insects like the emerald ash borer hidden inside, and live plants imported for landscaping.

These pests cost the country billions of dollars every year. The bulk of that cost falls on homeowners who need to take down dead trees and lose property value when beautiful trees in their yards die. Municipal governments also bear a large share of the cost as they must remove dead trees in parks and on streets. We are about to witness these costs firsthand in the North Country.

The solution to this problem is in the hands of the federal government, which regulates trade. Using either regulations or incentives, the federal government should take steps to reduce the inflow of these damaging pests by restricting the use of solid wood packaging in international cargo shipments and by cutting off the importation of the types of live plants that are most likely to transmit pests to our native trees. The government should also ramp up surveillance for new pest outbreaks and stiffen penalties for those who do not comply with current trade regulations.

We should be alarmed by the emerald ash borer and the hemlock woolly adelgid, which are already decimating trees in our forests and towns. But the pest that we should be most worried about is the next one — the one that is being offloaded from a ship or a plane somewhere in the U.S. right now. Will it kill our maples? Our spruces? Our birches?

Congresswoman Stefanik and Senators Gillibrand and Schumer should take note of this problem and work to solve it. Governor Cuomo should be rallying governors of neighboring states to work together to press for action in Washington. With concerted action, we can insist on clean trade and save our trees from the next disastrous pest.

For more information on this problem and its solutions, go to www.caryinstitute.org/tree-smart-trade.

Gary Lovett is a forest ecologist and senior scientist at the Cary Institute of Ecosystem Studies in Millbrook. He also owns a camp in Minerva, Essex County.