Bad spin on the railroad

This page from the Adirondack Railway Preservation Society’s Annual Report for 2016 shows the Adirondack Scenic Railroad’s financial situation is improving. 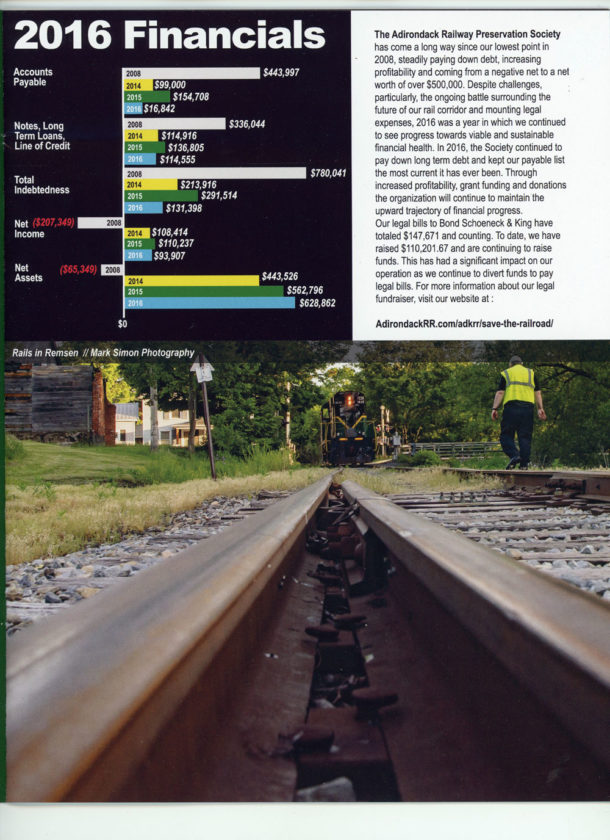 This page from the Adirondack Railway Preservation Society’s Annual Report for 2016 shows the Adirondack Scenic Railroad’s financial situation is improving.

I’ll try to keep this brief, because even I — as a staunch supporter for the “Save The Rails” movement — am growing weary of the back-and-forth conversation. There are so many times that the Adirondack Recreational Trail Advocates crowd (both board members and supporters alike) have been throwing out unproven facts, claims and numbers that the whole debate has gotten way beyond tedious. Dick Beamish’s letter from May 30 is yet another example of putting a trail-slanted spin that is not proven when questioned.

Beamish writes, “A look at successful rail trails elsewhere helps to answer these questions (of how many visitors, etc.)”.

Just last week, I was visiting Hopewell Junction. Hopewell Junction — as the name implies — is a former railroad junction which is currently the east-end “starting point” of the rail trail that works its way toward (and over) the former New Haven Railroad Poughkeepsie Bridge (now formally known as the “Walkway Over the Hudson”). The trail is paved, beautifully maintained and a joy to use. It is an example that the trail founders and constructors should admittedly be proud of. It’s truly worthy of all of the accolades it has received since it was opened.

There is a railroad museum located in the fantastically restored Hopewell Junction depot. I stopped into the museum and got to talking with the staff about rail trails in general, and we got to talking about the current debacle between Tupper and Placid. When it was mentioned that the railroad was in the process of being evicted, barring any pending court decisions, their looks were that of confusion. One of the museum members came right out and asked, “Why are they trying to tear out a working railroad?”

There is the key word — working. ARTA has tried to put forth the claim that the Adirondack Scenic Railroad was (or is) abandoned. This is a blatant misrepresentation of the facts, but as they have proven in the past, if it helps their argument, then they just go with it. As much as they want people to believe it, the tracks have not been considered “abandoned” for many years. The stretch south of Saranac Lake to Big Moose is indeed “out of service,” but that is a far cry, both physically and literally, from being “abandoned.”

The main difference between the majority of the successful rail trails often touted by ARTA as prospective comparisons to their scheme for the Adirondack Rail Trail is that none of their examples was built on the bed of a railroad that had paying customers the season or two before. The Poughkeepsie Bridge line, to give an example, took almost two decades to be officially “abandoned,” beginning in May of 1974, when the bridge fire occurred, until the 1980s, when Conrail finally threw in the towel on the customers that it was still serving on the east side of the bridge.

Both ARTA supporters and board members alike have been confronted with actual, documented facts and questions against their stance, but most of the time they will either blatantly ignore the facts, avoid the questions or simply result to taunting the person stating such facts. It’s almost comical when they resort to calling rail supporters nothing more than grown men wanting to play with their “choo choos.” These taunts have come from anonymous trail supporters and ARTA board members alike.

And finally, Dick Beamish broadly opinionizes the financial income of the local area from the railroad in his last paragraphs, by stating that “some ice cream cones were purchased by train passengers at the Stewart’s Shop near Union Depot. Beyond that, however, the business generated from train riders has been negligible. Compare this questionable economic benefit to a rail trail that attracts large numbers of visitors with time and money to spend.”

Again, Dick, really? Based on what? Your own group’s speculation?

Included with this submission is a scanned page from the Adirondack Railway Preservation Society’s Annual Report for 2016 and spring 2017 newsletter. I’ll let the graphic do its own talking. I find it QUITE unlikely that an organization under such scrutiny for the use of a state-owned piece of infrastructure would publish false numbers. From what these numbers tell me, the railroad is doing pretty well and growing nicely since its low periods a few years back. Just think of how much better the most recent numbers would be if it didn’t have that big chunk of funds going toward the legal fees in the current legal battle.

The numbers show a nice, on-the-record documentation of how the Adirondack Scenic Railroad has indeed been growing, contrary to what the detractors try to put forth.

They’re a lot more grounded and believable than any set of figures that we have seen from ARTA.