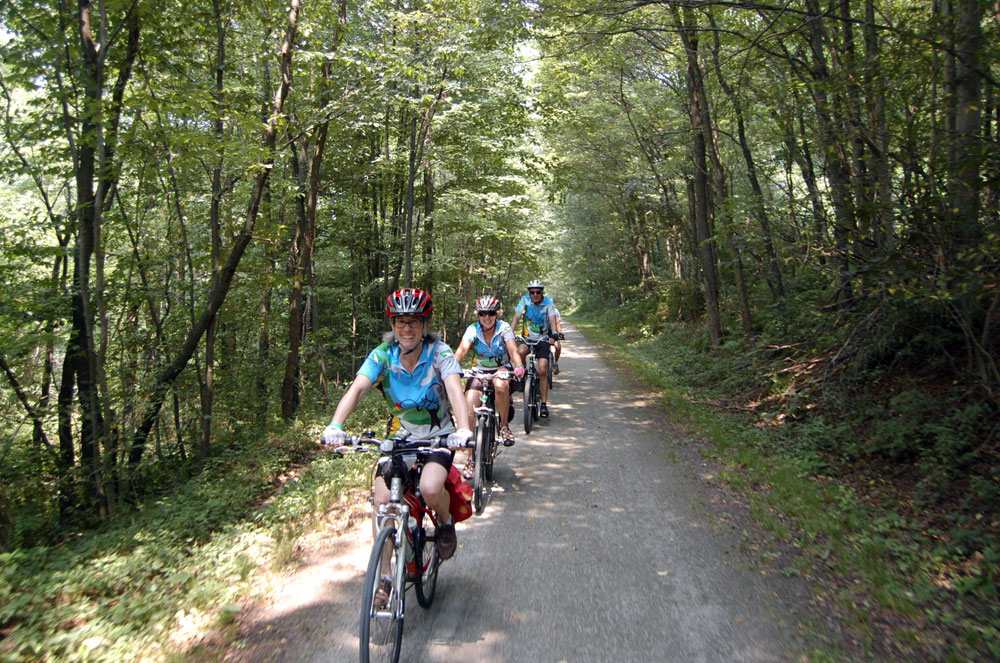 In the same issue of the Enterprise was a letter from Charles W. McCutchen of Bethseda, Maryland, who lamented the move by the state government to convert the old Tri-Lakes rail line into a new recreational trail for all seasons.

“Why would Albany hurt people for no apparent reason?” he asked.

It would appear that Mr. McCutchen has not been tuned in to the debate of the past seven years. Mr. Crowley counted 626 letters and commentaries on this subject that have appeared so far in the Enterprise (making this one number 627 — perhaps some kind of record?). Much of the public outpouring has favored the conversion of the rail line to a recreational trail. The reasons for doing so have been set forth, in mind-numbing detail, week after week, year after year.

Mr. McCutcheon nevertheless questions why Albany would “want to hurt people” by replacing a marginal tourist-train operation between Lake Placid and Saranac Lake with a recreational trail that would enrich the quality of life for residents and tourists. This seems like a case of misplaced sympathy. If Mr. McCutchen is truly concerned about people getting hurt, he should take a look at the imperiled bicycle riders navigating the 10-mile stretch of Route 86 that connects the two villages.

Nationally, bike riding is an increasingly popular form of outdoor recreation. Regionally, bicycling seems poised to take its place with hiking and paddling as a favorite outdoor activity in the Adirondacks. Unfortunately, however, Route 86 is the only way to bike between Saranac Lake and Lake Placid. This is a busy road with narrow shoulders, where cars and trucks whiz by a few feet from the bicycles. Consigning cyclists to this dangerous stretch of highway is, in fact, a great way to hurt people if they happen to get hit by a motor vehicle that veers slightly off course. Forget about getting “hurt.” Such accidents are often fatal.

Now consider the blessings of a separate, scenic bike trail joining the two villages and extending another 24 miles to Tupper Lake. With the trail in place, how many more local residents would enjoy bicycling there? How many would ride, jog or walk at least part of this trail on a daily or weekly basis? How many bicycling visitors, known by tourism promoters as “wallets on wheels,” would be drawn to this tourist destination? How many families with young children could partake of this invigorating outdoor experience, well away from the noise, fumes and danger of traffic?

A look at successful rail trails elsewhere helps to answer these questions.

Mr. McCutchen says the demise of the Placid-Saranac tourist train will “keep passengers and crew from enjoying the ride and merchants from getting extra business.”

True, the fun will be over for the crew and passengers. But they’ve had their fun for 20 years now, and it hasn’t paid off. Most of the cars on the tourist train have often appeared nearly empty. It’s also unlikely that many of the passengers would ever repeat this experience. One trip might have been fun, but for most customers, once is enough.

Compare this to the fun experienced by so many and so often on a rail trail. Repeat users are the rule rather than the exception. On our Adirondack Rail Trail, young and old will be able to enjoy this amenity — at no charge! — whenever they have some time to spare: at lunch hour, before breakfast, after school or work. Some bicyclists will spend a day on the trail, or a weekend, or even an entire vacation exploring this scenic pathway and taking advantage of the other biking, hiking, paddling and cultural opportunities along the way.

Another big plus: Rail trails confer lifelong health benefits. Who can dispute that walking, jogging and biking is good for our hearts, lungs, muscles and mental health?

As for those “merchants … getting extra business” from the tourist train, I challenge Mr. McCutchen to identify any significant economic benefits from the Placid-Saranac train during the two decades it has been monopolizing the rail corridor between these villages. True, some ice cream cones were purchased by train passengers at the Stewart’s Shop near Union Depot. Beyond that, however, the business generated from train riders has been negligible. Compare this questionable economic benefit to a rail trail that attracts large numbers of visitors with time and money to spend.

Here’s the conclusion of the PBS documentary, as recounted by Mr. Crowley: “A thousand miles of rail trail already wind through New York, each with its own fantastic story, each taking visitors on unforgettable journeys. No matter where you find them, rail trails are emerging as a vibrant sign of renewal throughout the state, the country and even the world.”

A resident of Saranac Lake, Dick Beamish is founder of the Adirondack Explorer magazine and a board member of Adirondack Recreational Trails Advocates.