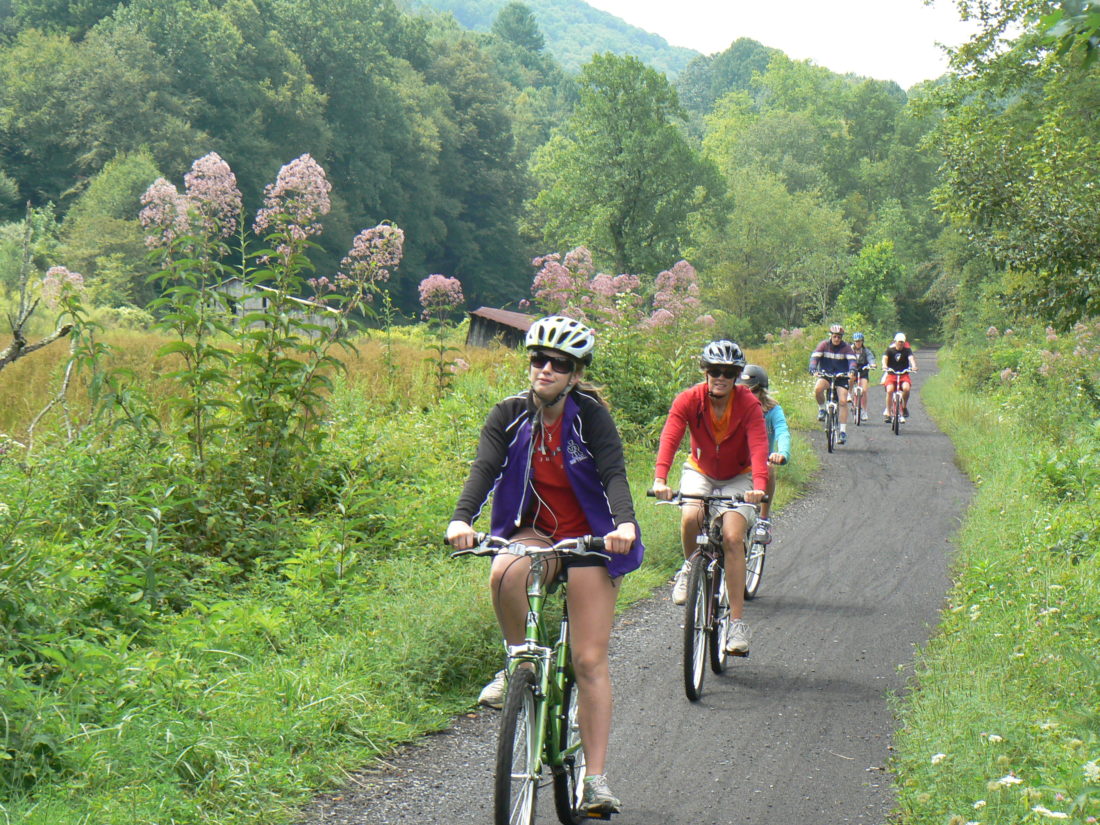 My wife and I are about to drive south with our bicycles, as we usually do this time of year. We plan to bike some favorite “rail trails” between here and Florida, and also check out some new ones, where old railroad beds have been converted to recreational trails that draw outdoor enthusiasts from far and wide.

But the benefits of rail trails don’t stop there. Perhaps most important, they provide a place for people of all ages and abilities to enjoy healthy exercise on a regular basis, whether it’s cycling, running, walking, pushing a baby buggy, operating a wheelchair, walking the dog, watching birds — while pursuing these physical and spiritual pleasures in a peaceful setting away from the noise, pollution and perils of road traffic. Rail trails are also a great way to soak up local history, with help from interpretive signs, kiosks and maybe a railroad station now serving as a museum.

The Adirondack Rail Trail, a state-sponsored project now in the planning stage, will connect Lake Placid, Saranac Lake and Tupper Lake. And this could be just the beginning! Another opportunity beckons in the southern Adirondacks, thanks to the historic railroad bed connecting Saratoga with North Creek, Newcomb and Tahawus in the heart of the High Peaks. This is the proposed Upper Hudson Rail Trail, much of it following the northern reaches of this fabled river. Extending for 86 miles, it could be one of the best bikeways in the United States.

Prime economic beneficiaries of such a project would be tourist-related businesses in the towns and villages along the way. Quality-of-life beneficiaries would be local residents living anywhere nearby. These neighbors could use the trail anytime for regular outdoor activity — before breakfast, during lunch hour, after work, on weekends — alone or with family and friends.

With the two rail trails in operation, there’s yet another opportunity. These trails could be connected via bike-friendly roads to create a 177-mile cycling route through the Adirondack Park. Bikers could start in Saratoga Springs and finish up in Lake Placid. Depending on your fitness and ambition, you could spend the first night in Corinth (17 miles), Hadley/Lake Luzerne (22 miles), Warrensburg (35 miles) or North Creek (57 miles). From there it’s another 25 miles to Newcomb, with a 10-mile side trip to the ghost town of Tahawus and the Upper Works, near the source of the Hudson River in the shadow of the High Peaks.

Then, after a night in Newcomb, it’s only 14 miles to Long Lake on Route 28N. En route, why not visit the Adirondack Interpretive Center on Rich Lake? Or take a 2-mile hike up Goodnow Mountain for a memorable view from the restored fire tower? Next day, it’s 23 scenic miles on Route 30, with its wide, welcoming shoulders, to the historic lumber town of Tupper Lake.

On the way, you can park your bike and take an easy hike up Goodman Mountain, then on to Tupper for dinner and an overnight stay. While you’re there, don’t miss the Wild Center nature museum. From Tupper, the Adirondack Rail Trail goes east for 25 miles, past the St. Regis Canoe Area and Lake Clear to Saranac Lake, the self-proclaimed “Capital of the Adirondacks.”

Spend a night or two, rent a canoe and paddle the Saranac River, and imbibe the charm of friendly, small-town America. Then ride the final nine miles to the Olympic Village of Lake Placid, with its mountain-and-lake setting and wide choice of lodgings and restaurants — for the grand finale of your Adirondack odyssey. (You can return to your starting point by bus or Amtrak from nearby Westport.)

So how are other, comparable rail trails contributing to local economies? At last count, the 60-mile Pine Creek Rail Trail through the “Grand Canyon of Pennsylvania” attracted 138,227 annual visitors. In that same state, the 165-mile Delaware & Lehigh Trail, which includes the 25-mile Lehigh Gorge Trail between Jim Thorpe and White Haven, reports 281,145 annual riders who shell out $19,075,921.

The Great Allegheny Passage, stretching 150 miles from Pittsburgh to the Potomac River in Maryland, registers over 600,000 yearly visitors. The 34-mile Virginia Creeper Rail Trail in the Blue Ridge Mountains attracts at least 250,000 annual users, according to Kevin Worley, director of Abingdon’s parks and recreation department, up from about 100,000 in the 1990s. The economic impact is estimated at $25 million a year.

Closer to home, the Erie Canalway Trail, a tow-path version of a rail trail, links Albany and Buffalo. With nearly 300 miles completed, it attracted 1.6 million annual visitors and $253 million in visitor expenditures, according to a study released by Parks & Trails New York in 2014.

In California and Nevada, the Lake Tahoe Regional Planning Agency reports that bicycle riders generate “between $6 million and $23 million in direct annual expenditures to Lake Tahoe communities.” More broadly, a 2010 study by the University of Wisconsin estimated that bicycle-related recreation in that state accounts for $924,000,000 in economic activity, more than half of it generated by bicyclists from other states.

All of this against a background that shows a surging national interest in bicycling. According to a study by the League of American Bicyclists, some 60 million U.S. bike riders spend $46.9 billion a year on meals, transportation, lodging, gifts and entertainment.

What are we waiting for?

Dick Beamish is a Saranac Lake resident who founded the Adirondack Explorer newsmagazine in 1998 and helped to establish Adirondack Recreational Trail Advocates several years ago.