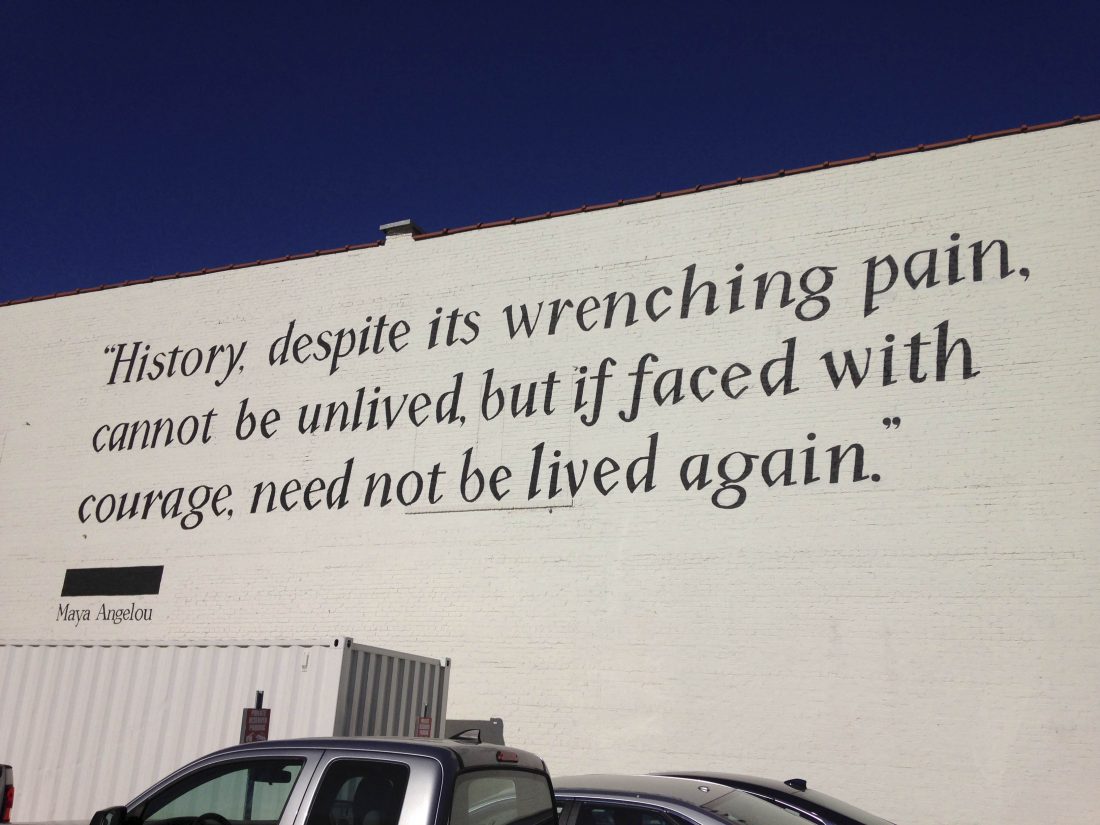 This quotation is painted on the outside wall of the Legacy Museum in downtown Montgomery, Alabama. The museum’s theme is “From Enslavement to Mass Incarceration.” (Enterprise photo — Peter Crowley)

We need police officers, but we also need to trust them. Perhaps the violence sweeping America this past week is, to a certain degree, what happens when people lose faith in the police they trust to protect them.

Where protests are peaceful, like they have been here in the North Country, that probably indicates protesters still have faith in their local cops, at least for the most part. We are certainly glad of that.

But we don’t like it when police officers abuse the powers they’re given. When that happens, faith disappears, and we’re stuck in situations like the one we’re in right now across America.

Like most Americans, we are horrified by the way a white Minneapolis police officer used excessive, deadly force against George Floyd, an unarmed black man whom they had arrested because someone had accused him of using a fake $20 bill to buy cigarettes. Floyd collapsed as officers tried to put him in a vehicle. Their subsequent report said they suspected he was bluffing. Nevertheless, instead of seeing if he needed medical attention, Officer Derek Chauvin pinned Floyd’s neck down on the pavement with his knee for 8 minutes and 46 seconds — including for 3 minutes after Floyd stopped moving.

There are competing autopsies giving different causes of death, but there is no question that the officer abused his power. A witness’s video makes that clear. Floyd, bystanders and even a few of Chauvin’s too-timid colleagues pleaded with him to stop, but he didn’t. It certainly looked like a murder — an intentional, unprovoked killing — and now Chauvin awaits trial for that crime.

Chauvin, by the way, had 18 prior complaints against him filed with internal affairs. Although the details of the complaints have not been made public, that is a large number. If he was a problem cop, he should have been fired long ago. Instead, he was allowed to devastate the reputation of his profession nationwide.

This one instance fuels the fire of distrust, but not because it stands alone. It’s only the latest in a long and shameful string of unarmed black people being killed by over-aggressive, fearful and possibly racist cops.

We strongly believe most cops are good, but the argument that this is just “a few bad apples” doesn’t work: first because there are so many cases, and secondly because bad cops have been protected and enabled too much over time.

Americans of all types are right to cry for justice over this systemic problem, and we support the peaceful protesters calling for it all over the country.

Sadly, many of the protests have turned violent. On the protesters’ side — though most of them have been peaceful — there has been looting and burning and assault, including attacking police officers; one off-duty cop was killed in St. Louis. On the other side, some of the heavy-handed response by police — again, not by most of them — has been deeply disturbing.

Mob violence doesn’t help the cause of reforming our police departments. If we are to truly change our society’s racial injustices — at least among the corps of police officers sworn to protect the people — we can learn some lessons from the civil rights movement more than 50 years ago.

In Montgomery, Alabama, a city with a horrible history of slavery and racism, downtown protests outside the state capitol were peaceful. It probably helped that the city now has its first black mayor and has gotten much better in recent years at facing its past with unflinching honesty. It also helped that some of the protesters worked to calm down those who got fired up. That kind of crowd self-discipline is critically important — as people in that city should know.

Symbolically, those protesters were not only in front of the Alabama State Capitol; they were also marching in front of Dexter Avenue Baptist Church, where the young Rev. Martin Luther King Jr. got his first assignment and where he was pastor when he helped lead the bus boycott in 1955. The discipline and strict nonviolence begun there is why the Southern civil rights movement of the 1950s and ’60s remains the global gold standard for protest effectiveness.

We hope Black Lives Matter protest organizers keep that discipline in mind. They don’t know who is going to show up, and all it takes is a few people with vengeance in mind to turn righteous into riotous.

Also, we hope all protesters remember that we need police. Maybe you think we need them to be better and to weed out their bad elements, but we need them nonetheless.