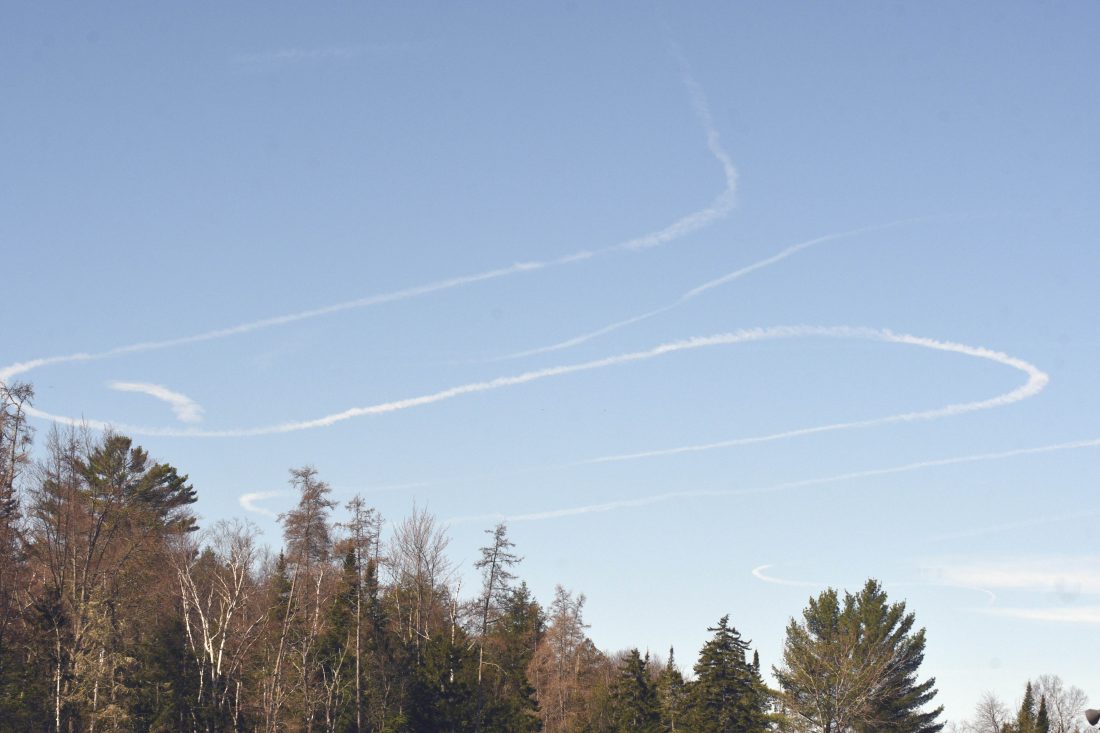 Trails are sculpted in the sky by F-35 fighter jets from the Vermont Air National Guard flying over Saranac Lake and the Adirondack Mountains Saturday morning, May 2. Vermont’s Air National Guard was holding a drill weekend, and the flights were part of that training. A spokesperson from the facility, located next to Burlington’s international airport, said the group plans to combine with an air national guard base in Niagara Falls in the near future to fly over Western New York as a tribute to front-line workers fighting the coronavirus. (Enterprise photo — Lou Reuter)

People sometimes call us when they see and hear jets flying overhead. They wonder what the military is up to, and they think we might know, or be able to find out.

Lately, there have been a lot of jets flying over the Adirondacks, and the Vermont Air National Guard was happy to claim them when we called to ask. They said they got their first F-35 jets in September 2019, and now they have 15 of them. They will eventually have a full 18-jet squadron, plus two more to rotate in for maintenance.

In the meantime, they are trying them out, and if you were a pilot, wouldn’t you want to fly over the Adirondack mountains on a sunny day?

They also have to fly over us to get to points west. On Tuesday, for instance, they said three of their F-35s flew over us on their way to Buffalo, joining the Air Force Reserve’s 914th Air Refueling Wing for a flyover salute to health care workers and first responders, who are so critical to all of us amid the COVID-19 pandemic.

In general, the Vermont Air National Guard has been very responsive to our calls. The folks at the U.S. Army base at Fort Drum have been helpful to us, as well, although in this case we did not call them because they generally use helicopters, not jets. We want to publicly thank them for being so accessible. It is crucially important that security agencies be open and honest to public questions.

Some people, of course, may suggest the military is lying to us. (Note: The person who recently asked us about the jets did not suggest that.) It’s true that we cannot independently verify the Vermont Air National Guard account, but we know that military agencies do many relatively normal, above-board things. When they say they are doing those things, chances are they are telling the truth; we have no reason to doubt them.

Those who instinctively distrust authority often fall into the trap of conspiracy theories, such as the often-debunked tall tale about “chemtrails” — suspecting that jets’ water-vapor contrails are actually chemicals released to control the weather or modify people’s behavior. Conspiracy theories can be as contagious as a coronavirus, and while they may seem appealing, they are toxic. They tell people black is white and good is bad, and lead people to distrust even those who are helping them.

Conspiracy theories rely on three things: fear, imagination and a lack of information. Take away any of those, and they fade away. Generally, the third is the easiest to fix, via fact-finding.

That is what journalists are here for. We gather information on your behalf so you can accurately see the terrain around you through the fog and illusion.

But journalists are messengers, not experts. When someone calls us asking about jets overhead, we don’t already know the answer. But if it’s important enough, hopefully we have the time, the curiosity and the wherewithal to find out who does know, and hopefully they are willing to answer fully and truthfully.

Thus, the ability to replace fear with facts relies on society’s people and institutions being open and honest.

So if you hear us complain about a lack of open government, we are not just frustrated because it makes our job harder. Rather, we are struggling toward a bigger goal: a society in which the government and the governed trust each other as fellow organs of the same body, sharing information freely and working together. Please forgive us if that sounds quaint or naive to you, but we still believe it is the way our society is meant to work.