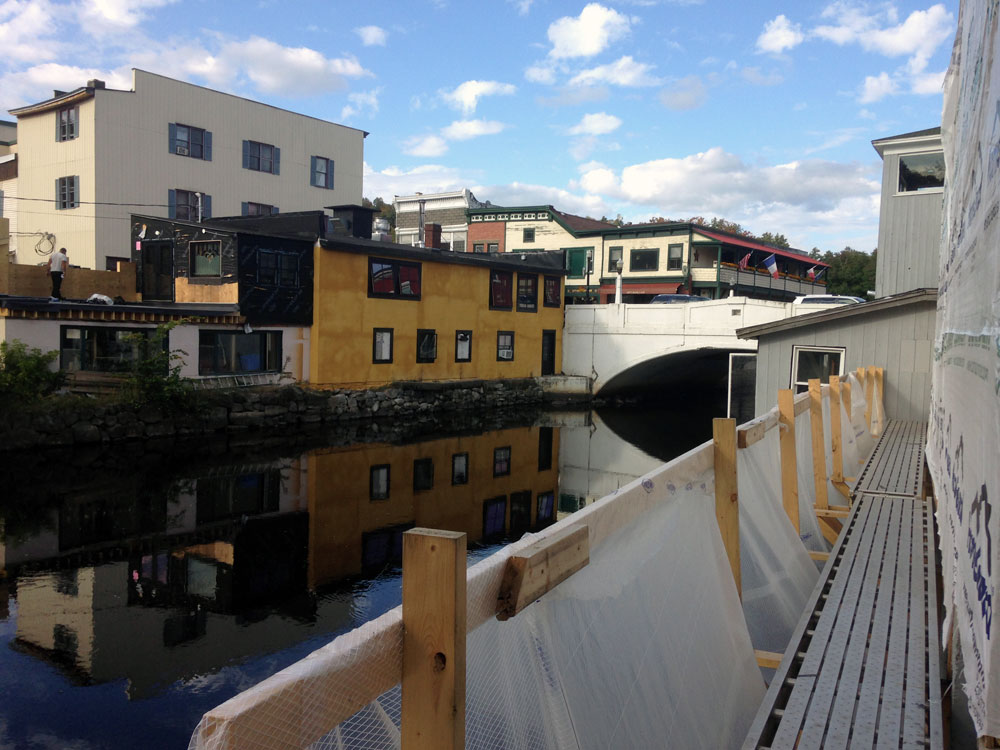 A construction scaffold over the Saranac River, seen in September 2017, shows where the Saranac Lake River Walk could go alongside the former Dew Drop Inn. (Enterprise photo — Peter Crowley)

It looks like some very good plans for the Saranac Lake River Walk are being swept downstream.

Village board members say they’re abandoning, with regret, their preferred option of having the River Walk go along a renovated former Dew Drop Inn and is considering other, much less interesting ideas. They have grant money in hand for River Walk work, and if they don’t use it soon, it will go away.

The two alternatives to the Dew Drop boardwalk are to make the alley behind the Dew Drop officially part of the River Walk, or to have people cross the bridge to Dorsey Street and walk along the sidewalk to Broadway. Either one would require spending money, although not as much as the Dew Drop boardwalk; it would be a way of using the grant that’s burning a hole in their pockets.

But neither would add anything of real value to Saranac Lake: not in terms of attractiveness, nor in quality of life, nor in economy.

Caught up in the current, village officials have to choose what to grab. We urge them to hold onto the preferred River Walk plan over the grant money. It’s the only plan that really does the job.

Some background: The Saranac River runs from the Saranac Lakes and their headwater ponds to Lake Champlain, emptying at Plattsburgh. It runs right through the heart of Saranac Lake, and a dam below Main Street swells it into Lake Flower. The way the community is nestled around the lake is a beautiful, welcoming scene, and the way the river winds through downtown toward the marshier sections on the way to Bloomingdale makes for a lovely natural layout. Yet for many years Saranac Lake used the river as a dump, literally, for heating coal and all kinds of other garbage. Downtown buildings’ backs were turned to the river, so people figured it was out of sight, out of mind.

In the early 1960s, the Enterprise led a campaign for Saranac Lakers to clean up the river, see it as an asset worth looking at, and try to develop its banks attractively. The paper showed pictures of other communities that had done this well. It took a while, but it happened.

The River Walk came into being in the 1990s and was one of the projects that helped Saranac Lake earn the All America City honor in 1998. But it was not finished. It still had to duck through an alley around the Dew Drop Inn, and it ended unceremoniously at a supermarket’s dumpster.

Several years ago, flush with the news that the Dew Drop Inn had been purchased and was getting renovated, the village secured grant money to help pay for a collaborative plan with the new owner, to run the River Walk on a boardwalk through the new restaurant’s deck, making that deck the equivalent of a sidewalk cafe over the water. It was a great plan, bound to be a hit with visitors, a little slice of the famous River Walk in San Antonio, Texas. And it would provide the missing link in what has been, essentially, two riverside strolls separated by a back alley. And what a link — kind of a golden spike, like the one that joined the Transcontinental Railroad.

With this link, the River Walk would make Saranac Lake significantly more attractive, not only to visitors but more importantly for people to move here, do business, enroll their kids in our schools and do their part toward community life.

But the plan hinged on the Dew Drop development, and that ended early this year. The building, gutted with only the first steps of rebuilding done, has been for sale since the winter.

In a letter to the editor, Bill Plumb shares our disappointment and suggests the village could purchase the Dew Drop property as parkland. Maybe, but perhaps the village — or a local development corporation or civic group — could instead secure an easement, a right of way, for the boardwalk. After all, it is the state of New York, not the property owners, that owns the river itself.

Another obstacle emerged in September when Bruce Darring and Katie Stiles blocked the River Walk from passing through their riverfront property behind Main Street storefronts. That is sad. We hope they and village officials can meet in good faith and work out a way for their concerns to be allayed and for the walkway to be reopened.

On the other end, the village also secured grant money through the $10 million Downtown Revitalization Initiative to complete the River Walk from Tops’ dumpster to Woodruff Street. Woodruff is a nicer ending, and a spot with much potential for future development, and there River Walkers could also get on the train tracks, which the state plans to convert into a multi-use trail. While the many who favor a revived train over the trail might quibble over this last part, that’s only a tiny bit of an overall excellent plan.

And the Dew Drop alternatives are even more so.

We urge village officials to pass on these second-rate detours, keep their eye on the prize — an uninterrupted River Walk all the way to Woodruff — and work persistently and patiently to complete it.