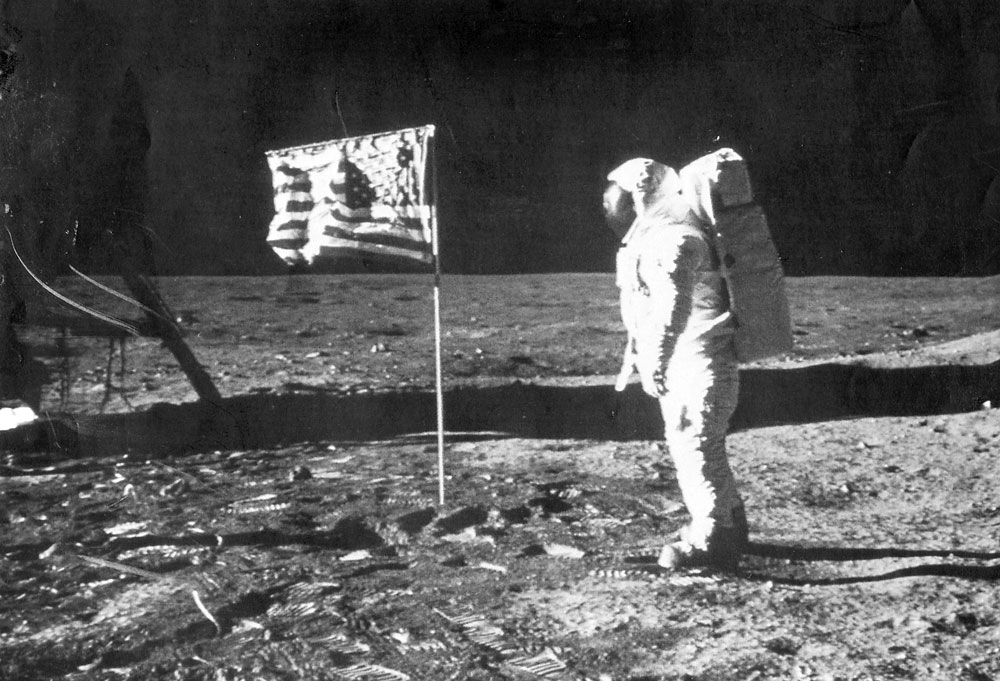 Edwin “Buzz” Aldrin looks at the Stars and Stripes as he becomes the first man to walk on the moon on July 20, 1969. (Photo provided — NASA via UPI news service)

For some Americans, the 1960s was a time when it was easy to worry about both our individual futures and that of our nation.

A bloody war in Vietnam dominated headlines. The young president who inspired us to ask what we could do for our country had been assassinated. We watched in horror as white police officers beat black protesters. We were learning that smoking could kill us and that our pollutants were harming the planet.

And there was the threat of a nuclear annihilation, always in the backs of our minds.

Suddenly, the sky was no limit. If we could land a man on the moon, was there anything we could not do? Was there any limit to humankind’s collective adventure of exploration?

As it turned out, there was a limit. During the past 50 years, we Americans have sent unmanned spacecraft into the outer reaches of our solar system, but no human being has gone past our immediate neighbor.

In fact, it has been decades since a human walked on the lunar surface. Only 12 men have done it. The last, Gene Cernan, was in 1972.

Perhaps the moon is a case of “been there, done that,” though reportedly there are plans to send another mission there — with one of the goals being to have a woman take a walk there.

Mars now seems our next goal. NASA is working on a plan for the 2030s.

From a time of seemingly unbounded optimism and enthusiasm about space exploration, we as a nation have changed. The space shuttle Challenger tragedy made us question sending humans into space. Needs here on earth prompted us to put limits on NASA funding, to the point that now, if we want to send an American into space, we have to ask the Russians for a seat atop one of their rockets.

July 20, 1969, seems like a long time ago in both years and our national attitude toward space exploration.

Where to, then, and with what? Do we resume sending human beings reaching out to touch the face of God, as one poet put it? Do we even spend the money to send unmanned probes into the blackness?

Ours has been referred to variously as the “digital age” and the “information age,” in reference to our ability to gather and disseminate knowledge. Often, we seem uncertain of the dollars-and-cents value of our ability to do that — but there seems general agreement that the more we know, the better off we will be.

What is space exploration, if not gathering new information? And what additional knowledge from space will we miss if we rely entirely on machines that lack human characteristics such as simple curiosity, willingness to take risks and, frankly, a propensity sometimes to abandon logic in favor of hunches?

Fifty years ago this week, we Americans were joined by hundreds of millions of others all over planet Earth in being happy that we had reached for the stars.

It can happen again.