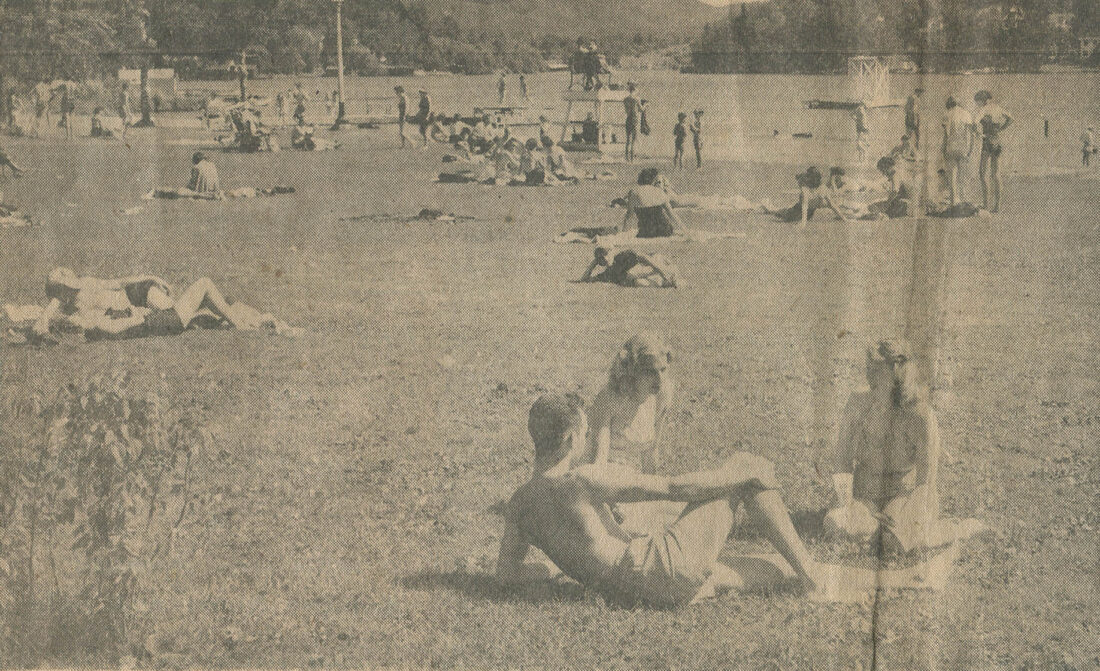 The beautiful Saranac Lake Village Beach located on River Street was lost to the widening of River Street and the state holding onto that piece (where the National Guard Armory was located) for a boat launch site. Many efforts have been made to return the beach to Lake Flower. The major one was in 1999 when Mayor Jim Jock said to me as village manager: “I don’t care what else you do, return that beach to Lake Flower.” I worked months on that project but to no avail. Maybe I shouldn’t have named my working committee, “Sons of the Beach.” (Photo provided)

This special edition was packed with advertising offering special rates to Canadian residents and many ads mentioning how close Saranac Lake is to Montreal.

Jim Loeb and Roger Tubby had purchased the Enterprise less than one year earlier and they were gung-ho about owning the only daily newspaper published in the Adirondacks. Imagine two guys that were about as big as one could get in the National Democratic Party. Loeb had worked in the State Department, held ambassadorships; Tubby served as ambassador to the U.N. Mission in Geneva, Switzerland. Also, and this is a big one, he served for a time as President Harry Truman’s last press secretary before his term ended.

This is how the local hotel/motel business has evolved. The term “motel” was created from motor lodge/hotel, where one could park the car at the front door of the room.

Saranac Lake was more hotels than motels. There were beautiful cabins on Lake Flower Avenue owned by Ron Keough’s grandparents, where Best Western is today; Gauthier’s tourist home (featured in the magazine Better Homes and Gardens) had cottages and was located right on the lake … and still is today.

At that time, there may have been only one motel located where the new Saranac Waterfront Lodge is today.

The tourist business was centered in the five hotels in town. The Hotel Saranac, The Berkeley, St. Regis, Alpine and the Arlington (aka, the Potter Block.)

Now the motels are disappearing and the hotels are popular again. Just take a peek at the Hotel Saranac any weekend and the gift shop has an incredible large and original inventory.

Having said that all of that, I heard a rumor this past weekend that there is something big happening with the Sara-Placid Motel and Amanda’s Village Motel at 128 River St. Like maybe changing hands.

I think my pal, Mike Kilroy, ought to be talked into managing one of those properties. Mike is a numbers guy who, at any night audit at the Akwesasne Casino, could find a penny short in that tall stash of cash.

I have mentioned the Deerwood Music Camp on Upper Saranac in his space before but get a load of this:

“A summer center devoted to developing talented youth in music, dance and art. Wilfred Pelletier, who heads the Conservatoire Nationale in Quebec and Montreal, and who also has been one of the leading conductors of the Metropolitan Opera as well as conductor of the Metropolitan Auditions of the Air is in charge of the orchestra and the opera workshop at Deerwood. Deerwood is now in its 12th year.”

“Robert Louis Stevenson was the most distinguished of the many thousands who have come to Saranac Lake for their health or for a vacation. He stayed at a small farmhouse in the village, skated on nearby Moody Pond and wrote ‘The Master of Ballantrae’ and 12 essays. The village keeps Stevenson Cottage as a shrine.”

“The New York State Golf Association has chosen Saranac Inn’s championship golf course for the 1954 New York State Women’s Senior Tournament, which is 36 holes, medal play. The matches will be played July 12 and 13.

“Steve Holloway, Saranac Inn pro, says that the Saranac Inn course will be in its finest condition this summer. This picturesque course was hewn out of the virgin forest and every hole is one of loveliest, scenic beauty.

“In addition to the course, there’s a broad practice hole and two practice putting greens.”

So folks, this edition of You Know What is mostly pictures of ads … and as photographers used to say, “a picture is worth a thousand words” — so we reporters would answer, “yeah, then try holding up a picture the next time you’re drowning.”

In this space last week we reported on the construction of Saranac Lake’s new medical center, which was dedicated ...

Last week, after a painful two year absence, the Saranac Lake Free Library book sale was resurrected. And when the ...

When Elizabeth Holmes started a blood testing company, Theranos, as a Stanford University dropout, she claimed to ...

4-H at the Franklin County Fair