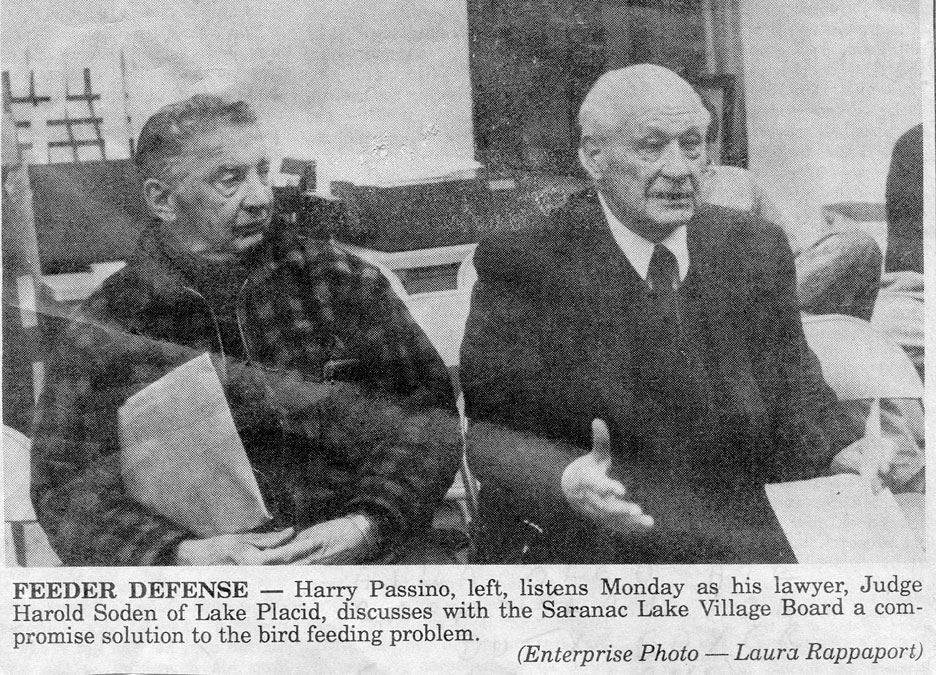 Harry Passino, man about town, knew everyone; everyone knew him; great personality. He was a car dealer and salesman for many years. I first heard these words, “I’ll sharpen my pencil and see if we can make a deal,” when I was buying a car from Harry when he was a salesmen for Carl Chevrolet.

But boy, did he get in a jam at his residence on Helen Street; dragged into court … well, not actually. Dragged before the village board, acting as the Board of Health, and he hired Harold Soden, the best lawyer in the North Country, to defend him.

What was he charged with, you ask? Feeding the birds.

Judge Harold Soden had retired as a state Supreme Court judge (1960-1988); this was 1990. He had served as Essex County district attorney, North Elba town supervisor and served in the Marines during World War II.

He could wither the opposition with one look. 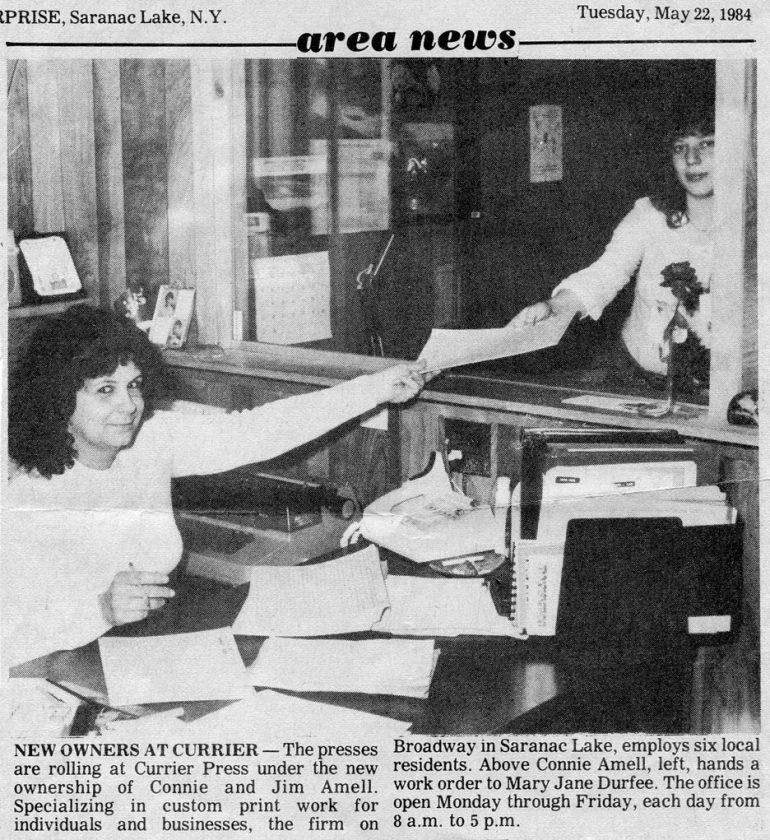 I worked for Judge Soden for one year, when he was appointed as receiver by Key Bank when the bank foreclosed on the Lake Placid Club. I had served as general manager for club owner John Swaim, so the bank kept me on, guessing that I knew where the skeletons were buried.

When I received a call to come to a meeting at the Key Bank branch office in Lake Placid to meet Judge Soden, I was shaking in my boots. I had heard many stories about how tough the judge could be.

Sitting at a conference table at the bank, someone introduced me to the good judge, who stared down the table at me and said: “Let’s get this straight, Mr. Riley: I’m the boss.” I answered, “Yessir, Judge, I understand.”

Later, I left the bank thinking, “Man, this is going to be tough.” The next morning I met with Judge Soden at the club, and after giving me a list of club business documents that he would need, he turned to me and said, “Now, Howard, is there anything I can do for you? Is the bank paying you the salary you should be getting? Do you need more help in any department? Is there any problem that you want me to address right now?”

I told him everything was good with me; I learned so much in that year, and the judge turned out to be one of the nicest guys I ever worked for — and he was a better storyteller than me.

This is for the birds

Excerpts from the Enterprise story — no byline, no date:

“The village board and the man whose daily bird feeding ritual has created controversy came to a compromise Monday night that pleased both sides.

“Harry Passino, the village’s notorious duck and pigeon feeder, will continue to feed his feathered friends until May 15 — but at the Saranac Lake Fish and Game Club, just outside the village limits.

“The two parties reached the solution Monday night, before a public hearing that had been scheduled to address the problem.

“After the session, Judge Soden said, ‘it’s the only thing that could be done.’ As part of the compromise the board decided not to charge Passino any fines that could have been imposed on him.

“Passino, who has been feeding the ducks in the village for many years without a flap, was cited for violating a section of the state sanitary code that prohibits feeding animals on the ground in an unenclosed container.

“Downtown business owners had complained to the village that the pigeons attracted to the feed were destroying their buildings.

“Passino continued feeding the birds despite being warned to stop by the local health officer. Because he refused to heed the repeated warnings he was brought before the board.

“The Fish and Game Club entered the picture out of concern for the wild ducks. Club members said the migratory pattern of the ducks, which normally fly south for the winter, is being interrupted, since food is available in the village.

“Worried that the ducks would starve to death if the feeding stopped in the middle of the winter, the club offered a feeding platform to the village so the birds could be fed legally. Club members agreed to let Passino feed the birds at the Club on the Bloomingdale Road until May 15 when the birds ought to be able to fend for themselves.

“Passino said, ‘After May 15, if I can do it legally, I’ll still do it.’ He has built a feeding platform on his own property on Helen Street.

“Judge Soden said part of the village’s problem is the fact that the Saranac River does not freeze solid in the winter, and the ducks are attracted to the open water.”