OPERATION MOP-UP — Cessna 140 in which Karl and John Griebsch escaped injury Saturday in a forced landing attempt on the highway. Monroe Flagg, on the ladder, secures craft to cable as the plane is lowered to the ground. (Enterprise photo — Bill McLaughlin)

The tail wheel of the plane was suspended on a wire about 50 yards from the crash site. (Enterprise photo — Bill McLaughlin) 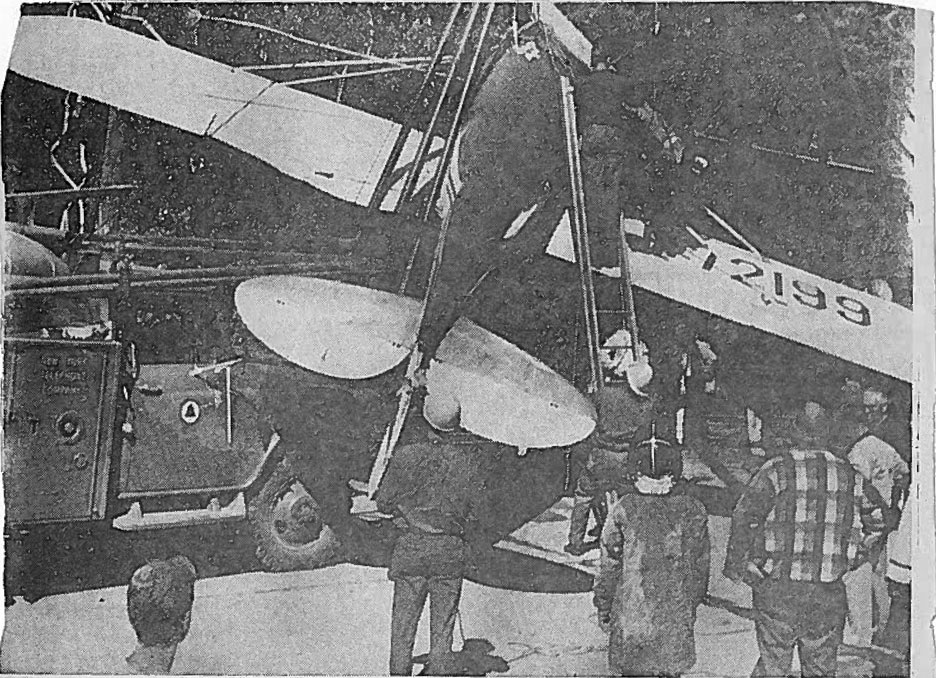 OPERATION MOP-UP — Cessna 140 in which Karl and John Griebsch escaped injury Saturday in a forced landing attempt on the highway. Monroe Flagg, on the ladder, secures craft to cable as the plane is lowered to the ground. (Enterprise photo — Bill McLaughlin)

This tattered story from page 1 of the Enterprise appears to have a date of September, maybe in 1966, but too difficult to read to be sure.

However, there is no problem reading the text of the story. I know by his style it is by Bill McLaughlin, but we seldom used bylines on our stories back then … and it was Bill’s photo.

So the following is pretty much the entire story:

“A good landing is one you can walk away from, and Karl Griebsch, an ex-Navy flying instructor, and his son John are around today to prove the point.

“The Saranac Lake father and son team took off Saturday morning from the Adirondack Airport at Lake Clear at 10:45 with John, 19, at the controls of the light, single-engine Cessna. 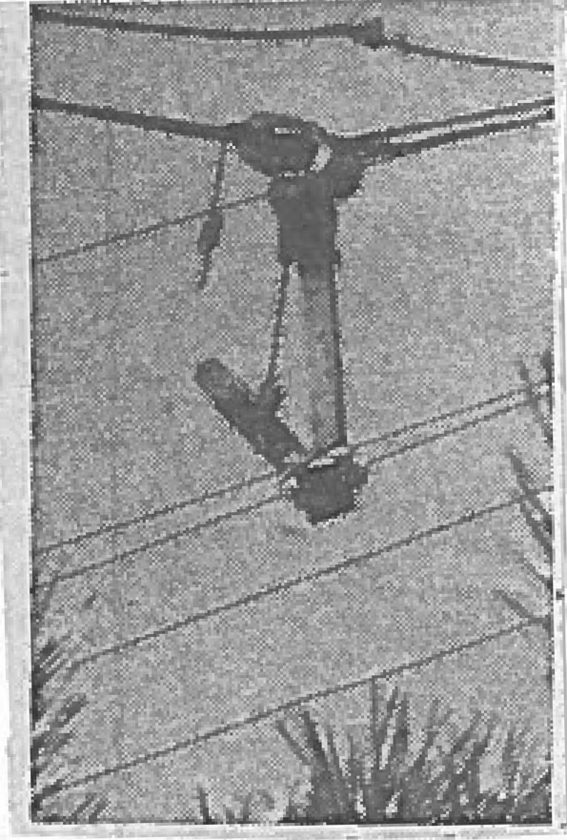 The tail wheel of the plane was suspended on a wire about 50 yards from the crash site. (Enterprise photo — Bill McLaughlin)

“The plane reached an altitude of 100 feet when the motor began to cough and sputter. Karl then took over the controls and began easing the plane over a section of the highway near the airport where he figured there was a straight stretch long enough to land the faltering aircraft.

“As the plane approached the concrete highway, it lost air speed enough to bring the rear end into contact with a power wire, throwing it off course and plunging it into a power pole upside down, snapping he pole off along with several phone and electric lines.

“The window of the plane had been lowered before takeoff to allow picture taking in the Lake Placid area, and both men were able to climb through the space and down the pole on which the plane hung. [This had to be an amazing feat in itself because they are both big guys.]

“The tail wheel of the plane was suspended on a wire about 50 yards from the crash site. State Police and volunteers were able to block traffic until the electrical hazard was ended.

“Crowds estimated to as high as 1,000 were attracted to the area when it was learned that the plane had crashed and that high-octane gasoline was spilling through the craft from a ruptured fuel tank.

“Mr. Griebsch, a former state trooper, directed traffic and aided state police for several hours after the crackup, having suffered only a slight scratch on the shin in an accident which might easily have proven fatal for both occupants of the green and white single-engine plane.

“The problem of getting the plane off the pole and restoring power and phone lines fell to the Paul Smiths Electric Company and The New York Telephone Company, which spent several hours on the scene with cranes and linemen before they were able to complete the tricky maneuver of removing the plane from its perch.

“Volunteers from the Saranac Lake Fire Department stood by during the entire operation with foam-type chemicals should sparks cause the plane to burst into flames.

“Linemen cut the wires entangling the aircraft, and the cranes lifted the plane gently from the pole and carried it to the airport.

“The plane was owned by Cal Houghton of Long Lake, N.Y.

“The pilot’s wife Marion and mother of John was unaware of the near tragedy until her son reached home at 1 Park Place and gave her the details.

“Singled out for especially heroic action in a situation which could have meant sudden inferno were veteran trouble shooters Monk Flagg and Bernard Brown, of Paul Smiths Power and Light Company, who worked on the rigging of the cables and in cutting the snarled wires.

“The area was cleared for traffic by early afternoon.”

I have flown both with Karl and John Griebsch; those flights were simply unusual, not spectacular … once with Karl landing on the strip of a huge, high pile of iron ore shavings at Tahawus, compacted into a landing area that had a beginning and an end that looked about 3 feet long from the air. I had a nice flight with John at the controls. He was doing aerial photography with the plane banked at a sharp angle, the window open and John with both hands holding the camera, shooting out the window. I asked about an odd buzzing noise that began, and John calmly explained it was the ‘stall horn’ warning. I guess that term is self-explanatory.

Go to John’s bio on the internet. He became a renowned aerial photographer, and you will see some beautiful shots taken by him from all over the U.S. and Europe. John’s quote in the bio: “I have logged a quarter of a million miles in my vintage single-engine Cessna.”