This story makes it all worthwhile

Noreen Bristol Oslander was the supervisor of the William Morris Playground on Bloomingdale Avenue when this photo was published in 1967. 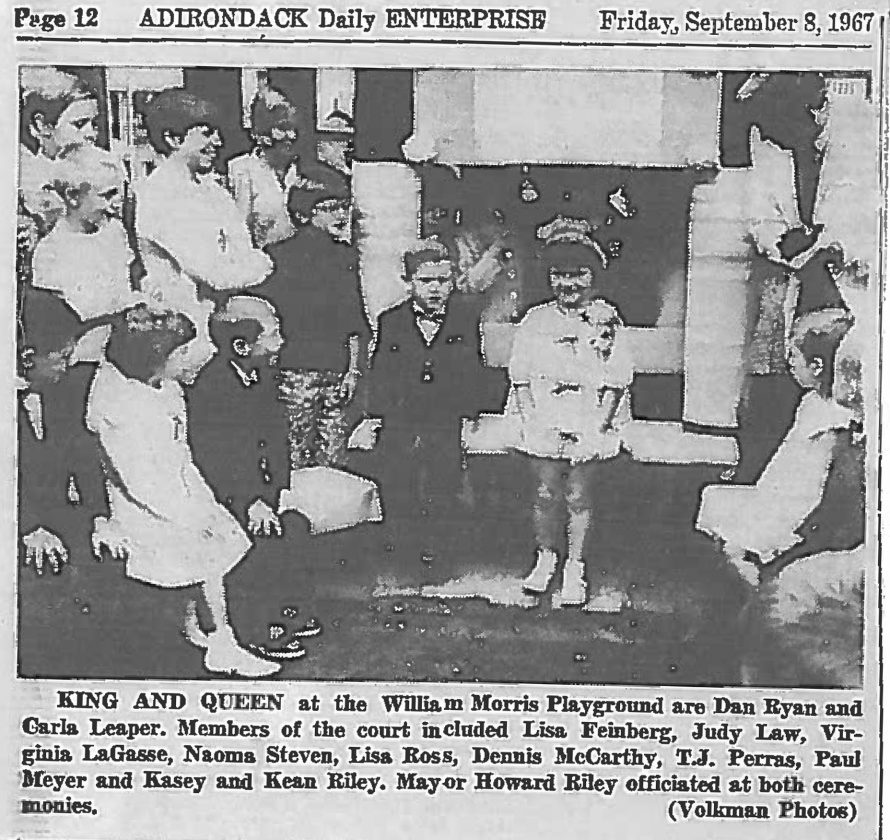 Noreen Bristol Oslander was the supervisor of the William Morris Playground on Bloomingdale Avenue when this photo was published in 1967.

The great satisfaction for me in being able to publish these humble scribblings of local history arrives in a note from someone who grew up here.

Last week Noreen Bristol Oslander sent me the following story as she had the nostalgic task of “putting the house in order.” Her father, Dr. Leonard Bristol, died at age 97 in 2016, and her mother, Ginny, died at age 100 in 2019. Both parents were born in 1919.

The Bristols created the model of family life in Saranac Lake in the 1940s and ’50s, as in the television shows “Father Knows Best” or “Leave It to Beaver” … raising Noreen, Kevin, Kathy, Dennis, Michael, Jim and Eileen.

The Bristols eventually moved to 47 Baker St. in the 1950s, and Noreen’s description of life there also fits perfectly with the times:

“Neighborhood kids on Baker Street, who all played together, often in the street, included the Clarks, Ryans, Nelsons, Sagemans and Pohls. Like all the neighborhoods in Saranac Lake in the ’50s, it was a great and safe neighborhood in which to grow up surrounded with caring families who all looked out for each other.” 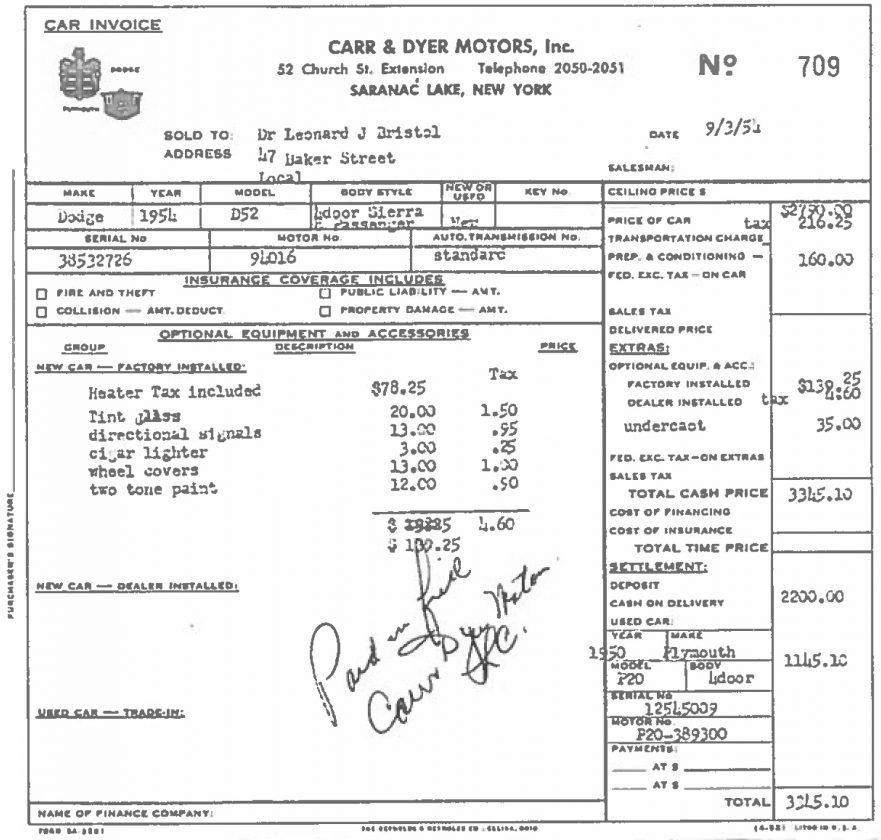 I was privileged to know Dr. Bristol when he served as president of the Saranac Lake Central School Board of Education and I covered the meetings as a reporter for the Enterprise.

“While cleaning out almost a century of personal papers, receipts, income tax files and other memorabilia from my parents’ home, I have discovered a number of interesting items. I have been able to travel down Memory Lane with many of the things I have found. Luckily I am able to recall many of the place names of businesses that I’ve found on bills and receipts that have been filed away for years: Downing and Cane, Betty Neihoff’s, Brewster’s Gulf Station, Cheesemen’s Sports Shop, Drutz Market and the Altamont Dairy.

“I do not recall the business where my Dad bought his 1954 Dodge that seated eight people, and I could not find a record of that business on the HSL [Historic Saranac Lake] wiki site. However, I’m guessing that you will remember it, as I attach the invoice for you to see. I wonder if it was located where Tops is now or perhaps across the street where AmeriGas is now. [You are correct!] Interesting to note that back in 1954, directional signals were considered ‘accessories.’

“I arrived with my folks and brother Kevin in the Adirondacks in 1948 [Dr. Bristol had been on the staff of John Hopkins Hospital in Baltimore, Maryland], living at the Mallinson Cottage, first house on the left inside the Trudeau gate from Park Avenue. A few years later we moved to 169 Park Avenue in a house built by Dean Acheson, who was secretary of state for President Truman. I believe it was his daughter who was curing of TB at the time. As a pre-schooler back in the late ’40s my memories are few, but still vivid. I can recall putting my three pennies up on the Trudeau post office counter to buy a stamp from Mrs. Slattery to mail a letter to my grandparents, and walking in a cold, dark tunnel built into the side of the hill which led to one of the offices where my father worked. WNBZ went off the air each afternoon for a couple of hours, so my brother and I had to settle down along with all the TB patients and most everyone else in town, including my parents, and take a short nap.

[Also, my dear Noreen, that is why schools did not end classes until 4 p.m. every day so all of us noisy students would not disturb the patients during rest time — 2 to 4 p.m.]

“I can still picture Eddie Norman bustling back and forth past our house multiple times a day with his grocery delivery service. As Edith and Archie Bunker used to say, ‘Those were the days.'”

I happen to remember Carr and Dyer

Carr and Dyer Motors first opened their automobile business at 38 Main St., where Madden’s Storage is now located. The dealership was owned by Vern and Louise Carr. The building was originally constructed to park 100 cars because none of the five hotels downtown had one single parking space. The driver would honk his horn at those big doors, and the attendant inside would push a button that opened the power doors. When the main floor was full, a car elevator took cars to the third floor or to the basement. I understand from Madden’s main man, Mike Lynch, the elevator is still used to move their storage items.

Anyway, that’s a different story. I worked the night shift there, 3 to 11 p.m. I drove taxi days.

The mechanics for the dealership worked on the third floor, and the offices were on the main floor, but there was no showroom for the new Dodges and Plymouths.

A few years later, after I went to work in the Enterprise composing room, Carr and Dyer had moved to where AmeriGas is today. They had a small showroom that held two cars. The mechanical work was then done in the garage at the rear, now owned by Thomas J. Dupree. Tom is becoming quite famous for his daily blog on Facebook, along with his shift work.

So I went back to work at Carr and Dyer’s part time, working at the Enterprise from 7 a.m. until 3 p.m. or whenever the paper came out, and then working at the Carr dealership from 5 to 11 p.m., six days a week.

My job was to undercoat the new cars and to pump gas. The undercoating was a messy job. The car had to be masked, much like it was getting painted, but much simpler. The hood was undercoated, all the wheels had to come off, and even the drive shaft had to be masked. I wore coveralls, goggles and big gloves because the undercoating was in a big barrel and it was sprayed onto the car, much like a light coating of tar. I got 3 bucks a car, and I could do one car a shift because I also had to man the gas pumps. Then, of course, the car, when finished, had to be put back together, cleaned up and ready for sale the next day.

So, Noreen, when I noticed on the invoice that your Dad paid 35 bucks for undercoating his new Dodge, I was quite upset since I had probably just undercoated it for 3 bucks the night before.

So thank you, Noreen, for all the history and the two illustrations that accompany this column.